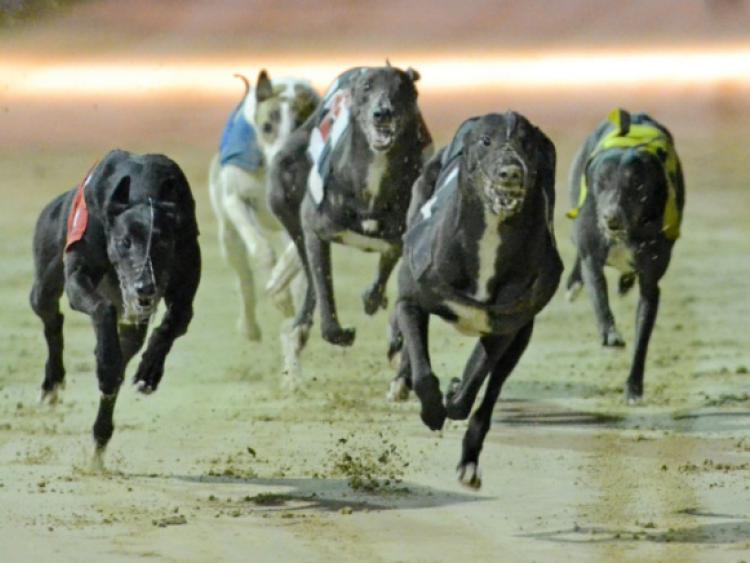 Farrelly, whose extended family has a long association with the greyhound game, is well on his way to recovery after a lengthy illness; having Deja Dancer in his kennels has been hugely helpful to him in his rehabilitation.

Aside from being the choicely-bred’s handler, Dennis, whose kennel is at Knockagh, Hackballscross, is a part-owner along with his sons, Michael and Australia-based Stephen, nephew Simon Newell, neighbour Colm Kirk and former Dundalk Stadium bookie, Jim McGivern.

Should Deja Dancer progress along the expected lines, then the syndicate – all of them, bar the trainer and McGivern, first-time owners – can look forward to many more winning nights. The October pup is bred to be good, being a daughter of Head Bound and Irish Derby semi-finalist, Rafas Wee Pet.

Deja Dancer had to be good to win the decider, which carried a first prize of €800. She wasn’t too well away, and turning into the back had eight lengths to find on Margarets Ryan, whose lightning break helped her avoid first bend crowding.

The Farrelly runner’s task looked immense even after she’d moved into second, but she began to eat into the frontrunner’s lead, and approaching the last turn her supporters began to find their voice. Her earth-devouring strides brought her on to the leader’s quarters, and there was enough of the race remaining for her to then get to the front.

It finished with Deja Dancer a length clear of the gallant runner-up, with the clock stopping at 29.02. Tullymurry Pedro, who didn’t get the clearest of runs at the opening bend, was almost seven lengths back in third, and after that it Mahogany Shiney, Tinas Claire and Sarasota Sally.

Deja Dancer, who is now two from three, will be given a rest before being aimed at any bitch puppy competitions that might feature on the calendar.

Newry-born, Dunleer-based Brian Larkin had a double on Saturday’s card, with Lip Reader obliging in the semi-finals of the McAllister Transporter 400 and Gavins Blonde taking the semi-final of another competition, the Clonross Spark Sprint.

Both finals take place this Saturday night, when Colm Farrelly’s Pats Rumble will figure among the opposition in Gavins Blonde’s race.

Saturday night’s card was notable for the number of trap 6 winners it produced. There were eight in all (from twelve races), with each of the six sprints going to the wearer of the striped sheet. Among them was Dryland Shadow, whose win in a 525 was another for Declan Byrne’s in-form Rockmarshal kennel.

Escapefromdisney wore the two sheet when scoring a debut win for owner John Byrne and Doyles Fort Road trainer, Aidan Lee. The daughter of Barefoot Bolt led a long way at one stage before holding out in the face of a strong challenge from Balscadden Molly.

On Friday night the good early season form being shown runners from Colm Lawrence’s Blackrock kennel was maintained, with Tullna Band adding to his success of the previous week with a smooth 400 win.