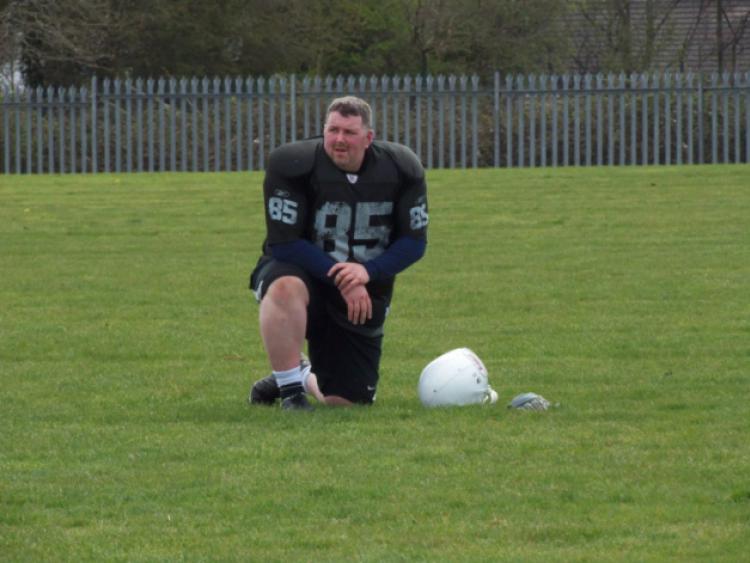 Barely a month has passed since Wayne McCrink and his Dundalk Mavericks team-mates made the trip back to town from Edenderry with words of shining praise ringing in their ears.

Barely a month has passed since Wayne McCrink and his Dundalk Mavericks team-mates made the trip back to town from Edenderry with words of shining praise ringing in their ears.

It was the validation they deserved having dealt with the nay-sayers before going to South Kildare Soldiers and leaving with a hard-fought 15-6 win in their first game.

“It was just deadly, no other word for it and the vibe was unbelievable,” a still euphoric McCrink said of that historic encounter.

“We expected to do well just because we knew exactly what we could do. The last training session before it, we all got together at the end and just told ourselves that we knew what we could do.

“No disrespect to Kildare but before the game, we looked at them and at each other and just knew we would win. Everybody in the team both, offence and defence, to a man we know our role and that helps the team in a big way.”

It didn’t take them long for the Mavericks to assert themselves with Ruairi McCarten getting the team’s first ever try inside the opening 15 minutes. “That was a special moment, all of the hard work that we had put in for so long and it all paid off there and then.”

Afterwards, opposing coach Ted Elston had some kind words to say of the town side.

“It was good after the game that their coach came and basically told us that we would have no problems this year and that we should manage to get promoted without much bother. That was nice to hear,” added McCrink.

The Mavericks will not be resting on that praise. Instead, they will be going about trying to prove that those words are not without foundation and make it two wins from two when they take on Tyrone Titans at DkIT this Sunday at 12.30pm in their first ever home match.

The Titans, who sadly lost their head coach Terry Lynch after he passed away last year, have a good blend of players picked up from Craigavon Cowboys and Belfast Trojans, two of the best sides in the IAFL.

McCrink expects a tough game but is also hopeful of a sizeable crowd coming out to give the Mavericks their backing in a game the group are eagerly anticipating.

“They have players from Craigavon and Belfast, big clubs, and we know that they hit hard and run hard. About 75% of their games is running,” he continued. “But we have a great team. We don’t fear anybody and if we play to our strengths then I have absolutely no doubt that we can beat them.

“It will be fantastic as well to play in Dundalk in front of our friends and family and if each of them bring a few people then we could have a really good backing,” he said of the support.

“The Giro d’Italia is on that day which could affect it but we would expect a good crowd.

“We had our Super Bowl party with about 300 people in attendance all asking about the game and when it would be and had another 200 liking and sharing it on Facebook this week too.

“For an amateur sport, if we were playing in front of 100 people then that would be massive for us and we hope it is the case because we all want to show everyone we are serious about this. We are not doing this for the craic. We want to show people just what we can do,” he says with a steely determination.

You don’t doubt it.