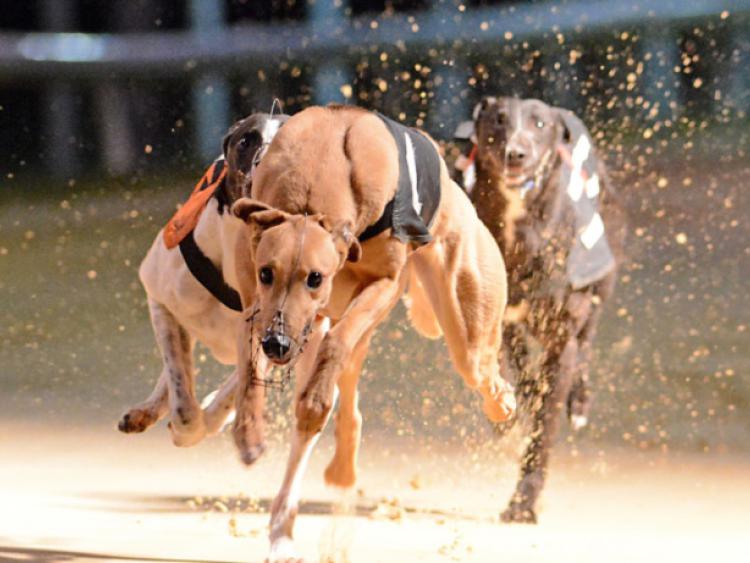 Craig Kelly has a strong hand going into this Friday night’s final of the Northwest Greyhound Supplies 550 final at Dundalk Stadium. The Clogherhead handler has two running for him, Mustang Vortex and Swift Iniesta.

Craig Kelly has a strong hand going into this Friday night’s final of the Northwest Greyhound Supplies 550 final at Dundalk Stadium. The Clogherhead handler has two running for him, Mustang Vortex and Swift Iniesta.

Also in the line-up is Strike One, running for Ardee’s Kevin Commins, and here’s one with a live chance of picking up the €950 prize.

Mustang Vortex won his semi-final last weekend in 30.41, taking the lead early on and defending it stoutly in the face of a strong challenge from Balscadden Molly. But there was a faster run from the other semi, Strike One clocking 30.28 after coming late to deprive the other Kelly runner, Swift Iniesta, of what looked a certain win at one stage.

Swift Iniesta showed huge pace after flying from four, and at one point in the back straight had six lengths on the field. But as the Vans Escalade dog’s stride shortened, Strike One gathered momentum, and in a powerful drive for the line, the Ardee challenger got up to win by a half-length. Smurfing Flame took third, three and a half lengths back.

Wee Bassitt, fastest first round winner, was hopelessly left in the traps, and was never a factor after that, finishing in fifth.

Mustang Vortex and Balscadden Molly were renewing first round rivalry in the second semi, Pat Pyne’s Molly going for a second successive win. The Balbriggan-bred gave a good account of herself, but always appeared to be fighting a losing battle after conceding lengths early on to the fast-starting Mustang.

The order remained the same throughout, the Kelly-trained runner making it home with just over two lengths to spare. Third spot went to the most experienced in the field, Goodwill Trader.

There’s a fascinating final in prospect. The early pace is likely to come from the Kelly pair, with Balscadden Molly another who could be prominent early on. But if it comes to a battle from the last bend, Strike One would have a great chance. The Commins runner is the strongest stayer of the sextet, and with a clear run could prevail.

Darver’s Paul McDonnell had a nice graded race winner on Friday night, Sion Silver scoring with the help of a late run. The former Clonmel runner, an odds-on chance, was out of it early on, but came through well to win from Colm Lawrence’s Class Pet in 29.35.

Then on Saturday night, Haggardstown and Blackrock celebrations - kicked-off the night before with the presentation of medals to the many winning Geraldines teams of last season – were continued with Sandygrove Holly winning for Vivian Sands.

And there was also a win for Peter Thompson’s Jenny Jump Up, the local runner getting up for a short-head win in a sprint.