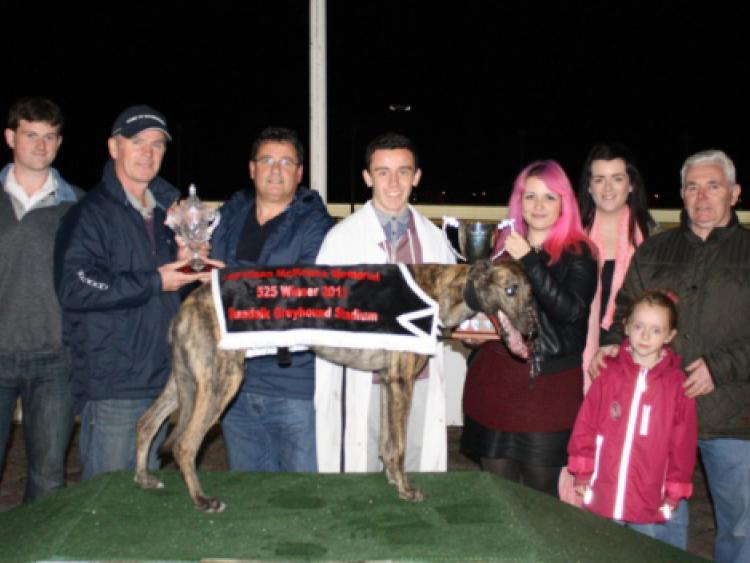 Two of the three finals down for decision at the well-attended Relay For Life benefit meeting at Dundalk Stadium last Saturday night went the bookmakers’ way, dead-heaters in one of them going off at 7/2 and 6/1.

Two of the three finals down for decision at the well-attended Relay For Life benefit meeting at Dundalk Stadium last Saturday night went the bookmakers’ way, dead-heaters in one of them going off at 7/2 and 6/1.

The final that provided punters with a favourable result went the way of a local runner, Michael Doyle’s Togher challenger, Vedfield Bossman. This lad, a 7/4 chance, has run up a nice sequence of wins in recent weeks, his victory in the CPL Fuels 525 decider being his third on the trot.

Vedfield was bought by Doyle at the Thurles Sales back in late June, and didn’t cost an arm and a leg. He was patiently handled for a number of weeks before making his debut on September 13, when he finished an unlucky third. Since then has had the measure of all opposition.

The son of Droopys Vieri had to be brave at the opening bend on Saturday night. After bursting his way through, he went into the back straight in front, and wasn’t headed after that. Just over three lengths divided the mid-Louth runner and Beretta Sea, who is trained in Clogherhead by Craig Kelly.

Mythbuster, was in as a reserve for the Horseware 525 decider, taking over from Allbrons. Ignatius Hamsey and Justin Muldoon’s dog had finished a hampered fourth to Toffee Paddy in the semi-finals, and in a race prior to that also met with trouble.

The son of Lugill Joe was smartest at the break in his pursuit of the €700 prize, but was soon joined by Kilnacroy Prince, who went a couple of lengths clear at the third bend. But Mythbuster hit back in the home straight, and was one of four in a line nearing to the finish, Toffee Paddy and Ni Dar coming late to also get involved.

It was a while before Mythbuster and the Co Monaghan runner, Kilnacloy Prince, were given a share of the spoils in a time of 28.89.

Colarhouse Jean’s win in the Mizu 550 final came just a matter of minutes before her litter-comrade, Colarhouse Jacko, ran an absolute blinder to finish a close-up third in the Billy Mulvaney Snr and Jnr Memorial 600 at Shelbourne Park.

Jason Whyte owns both greyhounds, and the Lifford man, on duty at headquarters, would have been delighted with the manner in which 9/2 chance Colarhouse Jean went about her business. She was well back early on as Eco Well led the luckless Drumcashel Dan around the first turn.

With Drumcashel sustaining a serious injury just before the turn into the back, Eco Well continued in front, but they began to gather on the leader’s tail, Colarhouse Jean, Catunda Blackie and Lord Miley having made significant progress.

It was anyone’s race with one hundred yards remaining, but Colarhouse Jean had the better finishing kick, getting up to win by a half-length from Catunda Blackie, with Lord Miley and Eco Well dead-heating for third. Winning time was 30.42.