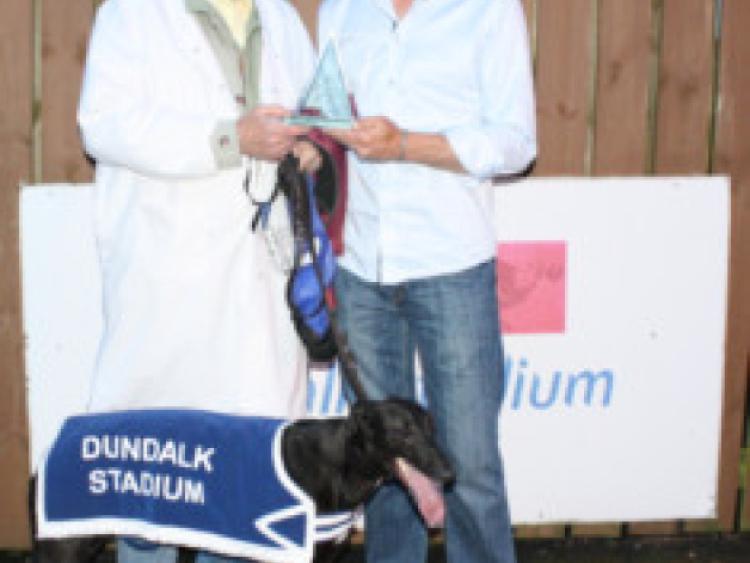 Last Friday was semi-final night at Dundalk Stadium, each of the card’s 11 races a preliminary for the five competition finals that will feature on next Sunday afternoon’s ground-breaking meeting.

Last Friday was semi-final night at Dundalk Stadium, each of the card’s 11 races a preliminary for the five competition finals that will feature on next Sunday afternoon’s ground-breaking meeting.

The standard of racing was much higher than it’s been at the track for some time, with several trainers who’ve been absent in recent times making a return. The 550 distance was popular, the runners in nine of the races having exactly one lap to cover.

The track surface had come in for an overhaul in midweek, and as a result times were on the slow side. That said, there was still a number of eye-catching performances, none more so than the one turned in by Mofara.

Sunday’s meeting is being promoted as a funday, with a special emphasis on entertainment for children. It will all be there, bouncing castles, balloon modelling, face painting, pony rides and a mobile petting farm. Doors open at 3 o’clock, with the first race going off at 4.30pm.

Unfortunately, there’s a clash with major GAA matches, Louth’s championship outing with Laois in Portlaoise among them. There’s also the meeting of All-Ireland champions, Donegal and Tyrone, two counties that normally provide Dundalk with plenty of runners and supporters.

Still, should the weather be kind, a big crowd can be expected, especially as the greyhound racing promises to be of a high calibre.In addition to the five finals, two Opens will feature on the card, each of them carrying a first prize of €700.

Mofara, a Co Armagh-bred if ever there was one, being by Local Honcho and Viewpoint Eagle, was on her fourth outing, chasing a third win when she lined up for the first of the A3 550 semi-finals. Her previous successes had come in sprints.

Alan Whitcroft’s Middletown runner wore the blue sheet and was first to come into view. She got to the bend ahead of Tullna Brae and held her position after that facing no real challenge. It finished with the June ‘11 five-and-a-half lengths clear of Buoy Em Five in a best-of-the-night 30.66.

The other qualifier was won in contrasting fashion, Steely Marvel coming from off the pace to register a 30.82 win for Castleblayney’s Catherine Kerr. The home-bred son of Droopys Vieri and Lady Dreamer was in midfield as the fast-starting Looks Fishy led Limekiln Phoenix by three lengths going down the back. But from there onwards nothing travelled better than the 78-pounder, and it soon after they had turned for home that he went to the front.

A length-and-a-half separated Steely and Looks Fishy, with Limekiln Phoenix staying on to take third.

Mofara is the nap, with Ballymac Addis, Bang Bang Bang, Colarhouse Lucky and Tullna Lough the selections for the other finals.