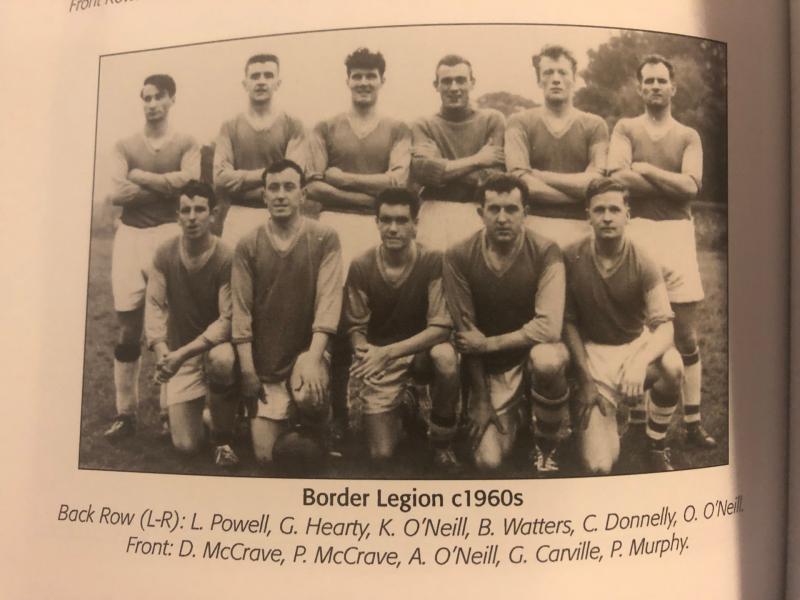 Back to Robbie Rafferty’s book, and in particular to a photo which appears on Page 148. It’s of a Border Legion team, based, if I remember correctly, in the Lisdoo part of town.

Back to Robbie Rafferty’s book, and in particular to a photo which appears on Page 148. It’s of a Border Legion team, based, if I remember correctly, in the Lisdoo part of town.

George Carville, who I often pitted my wits against in card schools in the Gaels ‘Hut’, is included, along with a former Democrat printer, Liam Powell. There are three O’Neills and two McCraves, Bertie Watters is goalkeeper, and useful footballer that he may have been, Gerry ‘Shadow’ Hearty was much better on the green baize, an above-average snooker player.

The player who caught really my eye was a C Donnelly. Could this be the Ciarán Donnelly who played with Gaels, but won greater recognition on Gaelic football fields far away from The Ramparts? Yes, says my club colleague, Peter McGahon, who played with Donnelly in the blue-and-white.

The photo was taken at the beginning of the 1960s, and by then Donnelly – known to his mates in town as ‘Gee’ – had won an All-Ireland medal. That was with Dublin minors, whose 1958 win was at the expense of Mayo, the Des Foley-captained side having beaten Louth in the Leinster final. He was in goals, where he had played with Gaels, and the year before his All-Ireland triumph was actually kept out of the town U18 side by none other than Peter McGahon. (Peter loves telling that one.)

Forgive me if this reads like something you’d expect to see in a Gaels newsletter and not in a story beginning with a reference to a soccer book.

The two 1958 Leinster finals, minor and senior, were played on the same day at Navan – Croke Park’s Hogan Stand, Mark 2, was being built at the time – and Louth played Dublin in both. The seniors were beaten, 1-11 to 1-6, but although the U18s also went down, they put up a much better show, conceding two late goals to leave it 2-10 to 1-6.

Brian O’Hare, a former Gaels colleague of Ciarán Donnelly, was up against Foley, the Dublin poster boy of the day, and edged it in a tremendous midfield duel. His Ramparts colleague, Ollie Kemp, was at wing-full, and Cooley Kickhams’ Barney Carroll, who would probably get the verdict if there was ever a contest to find Bellurgan Point’s best-ever footballer, was on the forty.

To finish: Ciarán Donnelly, who played his Dublin club football with O’Connell’s Boys, wasn’t the only All-Ireland medal-winner in his family. His brother, Gerry, also won a minor – with Tyrone in the late 1940s.