INSIDE TRACK | Mattock men making waves in Leinster again... and they're not finished yet! 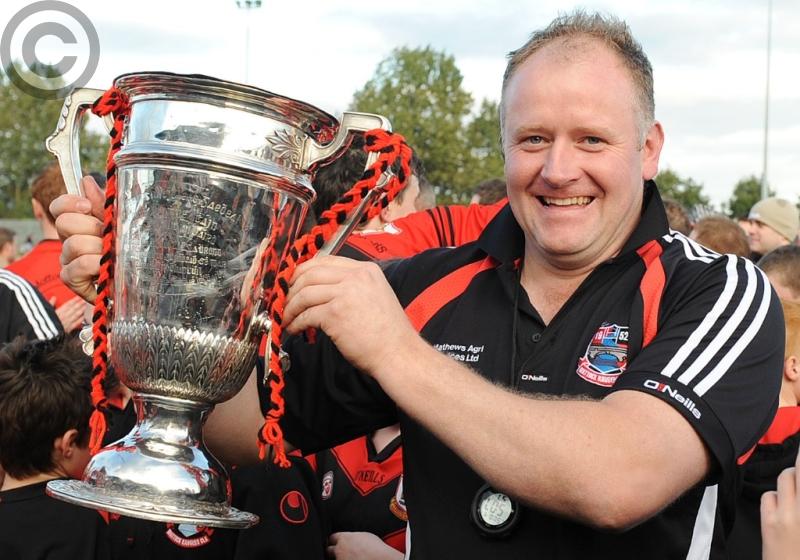 Kit Henry was in charge of Mattock Rangers when they won Joe Ward in 2009 and 2010. A decade on and they're back on the provincial stage. (Pic: Arthur Kinahan)

There are two reasons why Mattock Rangers could make a big impression in Leinster this year. They’ve done quite well as it is, winning their two games to date, and are now set to play Wicklow champions, Dunlavin, in the semi-finals.

But their own decent record at provincial level, and the intermediate grade being the main one in which Louth teams have had success, suggests there could be more than just one further outing for the Collon boys.

Cooley Kickhams (twice) and Newtown Blues stood as the only Joe Ward Cup-holders to reach the senior provincial final prior to Mattock making their bow in 2002. An opening round draw with Rathnew in Ardee was hardly a pointer to the red-and-blacks becoming the third team to reach the last round, but they went on a gallop after that, winning the replay quite handsomely and then accounting for Offaly’s Tullamore in Ardee.

It was then on to Páirc Tailteann a fortnight later, and here Kildare champions, Moorefield, were taken care of with some ease, the game finishing with a 3-13 to 2-10 scoreline.

The Sunday before Christmas was hardly the perfect setting for a provincial final, but so it was, Mattock paired with Dunshaughlin, Navan again the venue. The game earned the Louth title-holders lots of notice at national level, maybe because Collon was the small village through which most travellers passed on the route to Derry, as well as the big mid-Ulster towns, before the motorway was opened.

Reaching the final was all Mattock could claim at the end of the campaign; Dunshaughlin were that much better, winning by six points, 0-13 to 0-7. But it was a good experience, which stood to them when they next represented the county. That was in 2005, and here they made another good impression, even if their journey didn’t last as long as the first one.

After beating The Downs, the Westmeath champions, and then Wexford’s Horsewood, Rangers, for the second time in a row found Páirc Tailteann an unhappy hunting ground. Newbridge Sarsfields were too strong, winning by 0-15 to 0-10.

Mattock, under Kit Henry, had two subsequent attempts, and made progress in neither of them, going down to a particularly heavy defeat in their meeting with Portlaoise, in 2009. But having won five of their 10 outings and drawn another, they have the best record, percentage-wise, of any Louth senior team.

Newtown Blues were once the high-fliers, but a dismal run since the turn into the 2000s has them well down the pecking order. Two match wins in seven campaigns, the three most recent included, might just be, however, a reflection on the state of football in the county as a whole.

Intermediate paints a brighter picture. Dundalk Gaels won the first running of the provincial series in this grade in 2003, and since were succeeded as champions by Geraldines and Sean O’Mahony’s. None of that trio tasted All-Ireland success, all of them going out at the semi-final stage.

But they all went close, and when O’Mahony’s moved up a grade, following their Joe Ward win in 2016, they gave a really good account of themselves, beating Baltinglass in Aughrim and Kildare’s Sarsfields in Drogheda, before going down in the semi-final to Offaly title-holders, Rhode, this game also played in the Gaelic Grounds.

Roche Emmets, the county’s junior representatives are, like Blues, out of the running, leaving only Mattock to carry the football flag. The Rangers were excellent in the county final – should they go anywhere close to a repeat display against Dunlavin they could have another decider to look forward to.