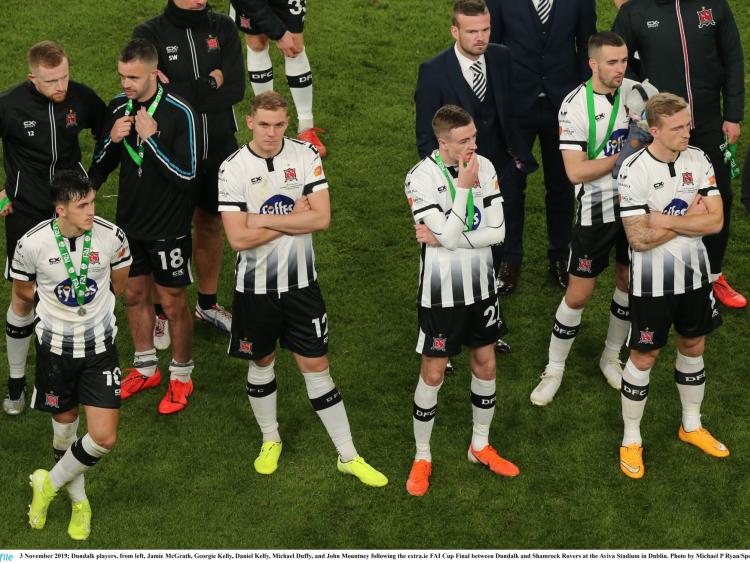 Gary Rogers: Another accomplished display by the 38-year-old, who pulled off a number of stops in the game. Fouled Aaron Greene for Rovers’ late penalty, but he had to commit in the instance. Went the correct way on every occasion in the shootout, without being able to stop any of them. 7

Seán Gannon: Unable to go on many trademark marauds down the right flank due to the systems both his team and Rovers were playing. Defended excellently to keep Seán Kavanagh and then Neil Farrugia under wraps. Made a vital interception in extra-time. 7 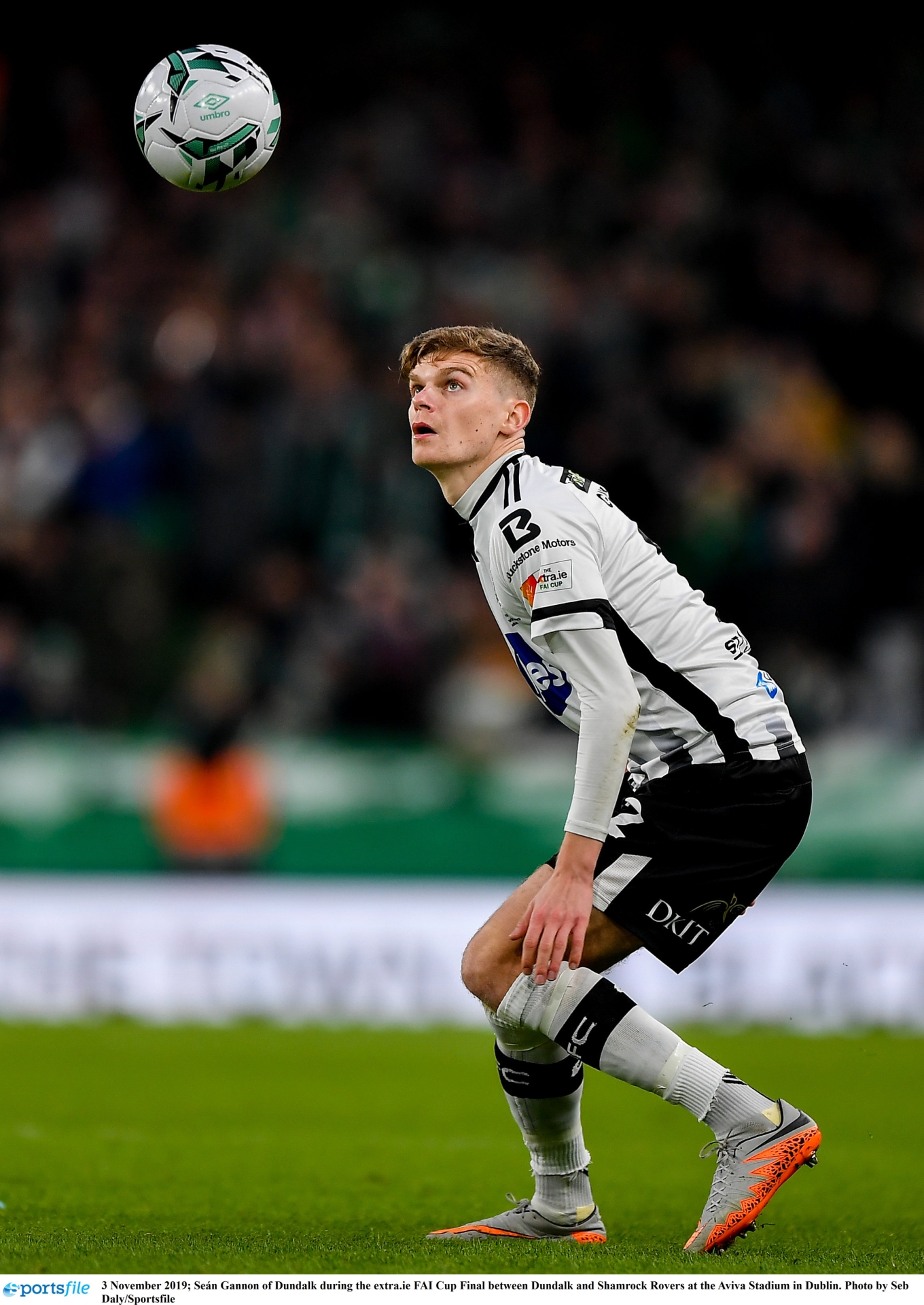 Brian Gartland: Why, it must be asked, has Brian Gartland not played more this season? Yet again, the captain stood up in an FAI Cup final and was arguably the best player on show. Competent with his distribution, his positional sense was on radar throughout. Can be very proud of his performance. 8

Daniel Cleary: Had a gilt-edged chance before half-time. Still, though, the young defender was outstanding. Never lost an aerial duel and coped quite well with the occasion, albeit he attempted to overplay at times. Unfortunate to miss a penalty in the shootout, especially given his overall showing. 7

Dane Massey: Allowed Ronan Finn to nip inside early on, but recovered to shackle all Rovers’ right-wing play thereafter. Neat and tidy on the ball and rarely caught out at the back, this was arguably Dane Massey’s finest FAI Cup final performance. Saw a first half free-kick sail over. 7 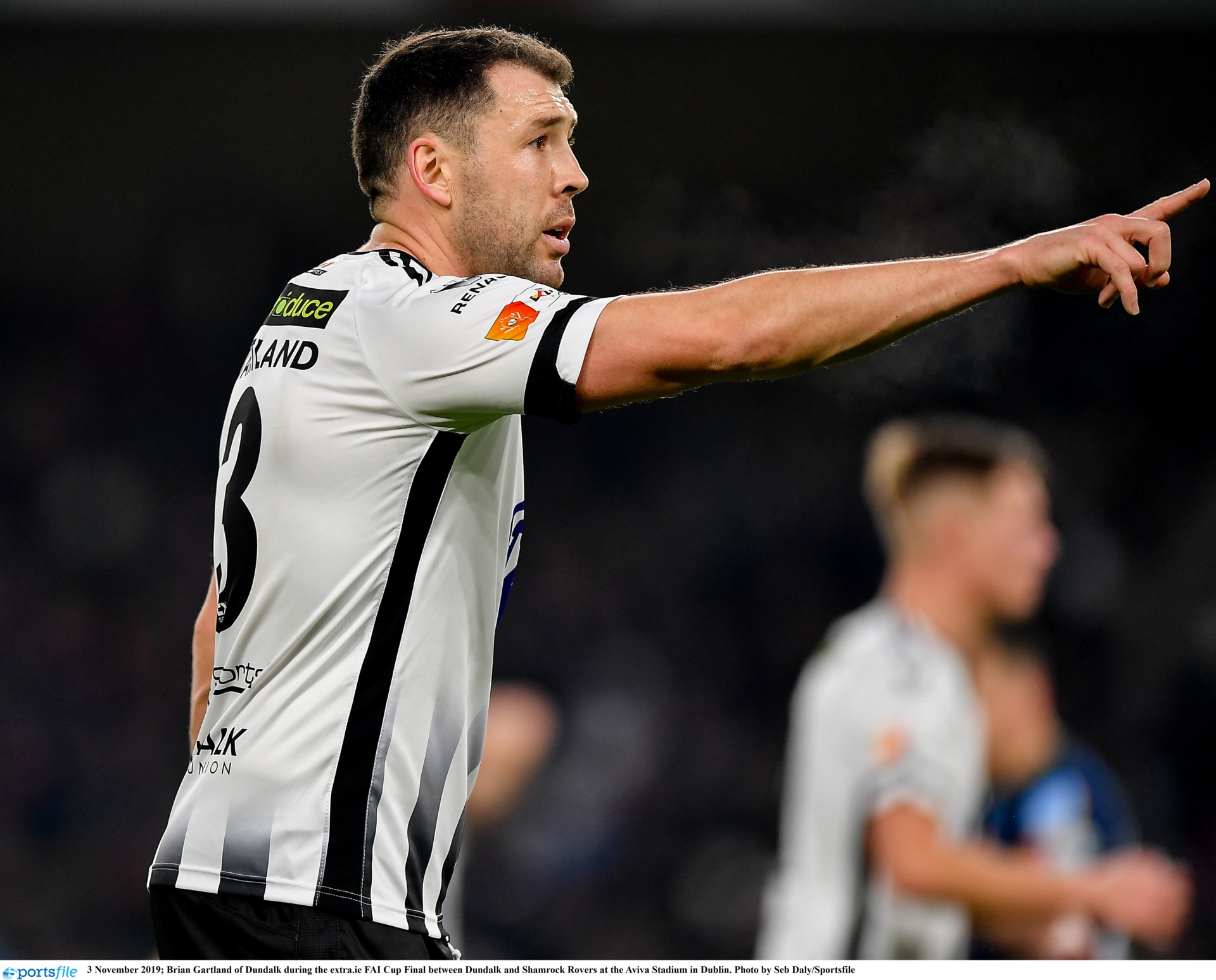 Seán Hoare: Out of position in midfield and it showed badly. Offered possession away cheaply on occasions and struggled to contain Rovers’ playmaker-in-chief Jack Byrne. A battler, but he will be disappointed overall. 4

Robbie Benson: Unable to get fully into the affair and was often found to be overrun in midfield. Kept the ball fairly well, but his passes were too often lateral or backward when The Lilywhites needed to up the tempo. A surprising withdrawal in extra-time considering he was a likely penalty-taker. 5

Jamie McGrath: Drifted inside far too often which left Dundalk both open and blunt on the right side. Looked a lot more comfortable when moved centrally, a switch which allowed him to get his team playing more in the final third. Put his penalty away with aplomb. 6 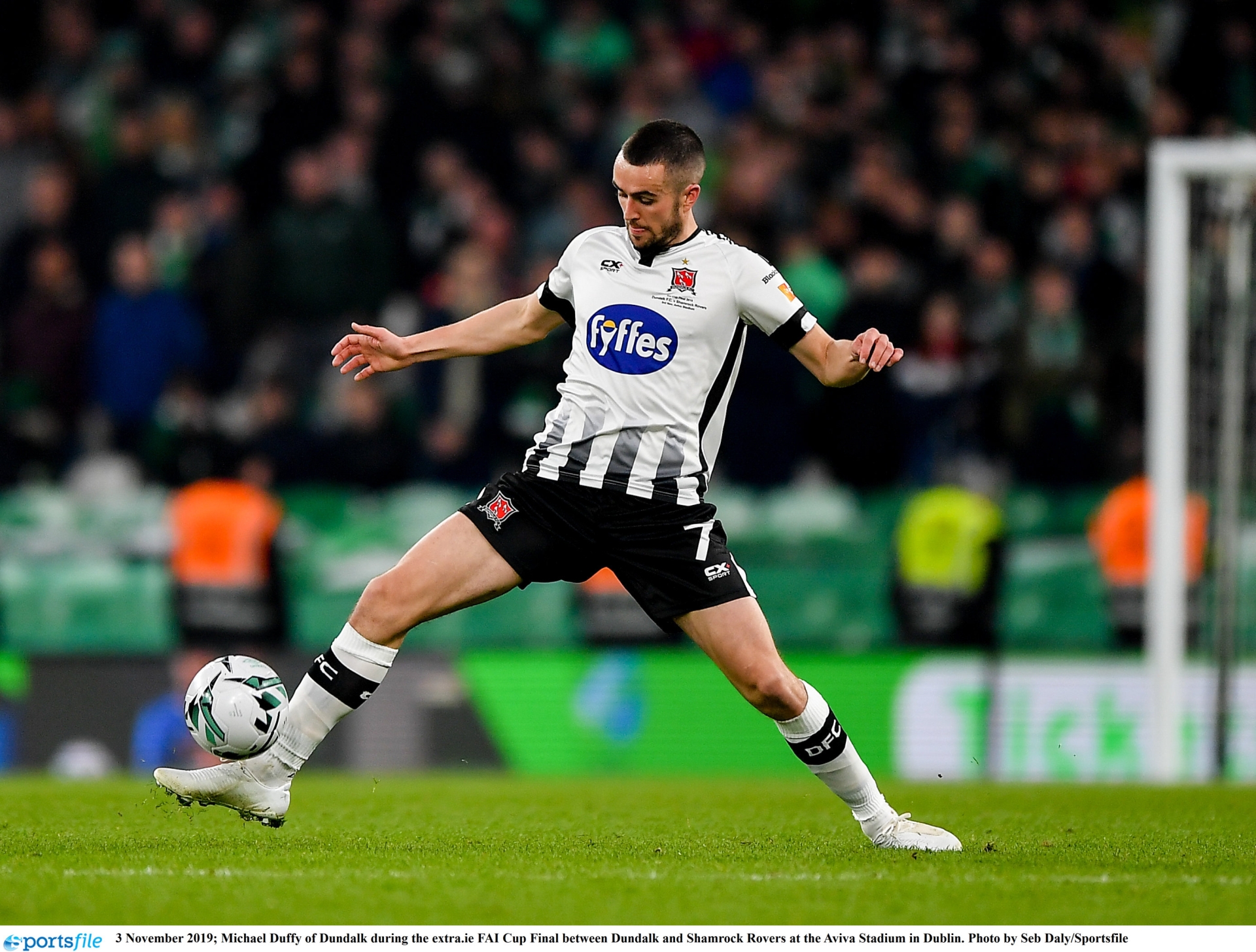 Seán Murray: A dangerous provider from set-plays, the former Watford man also had efforts on goal, none of which came close to breaking the deadlock. Surprisingly included, before being replaced during the second half. A decent display. 6

Michael Duffy: Scored another cracker to send the game to extra-time, before rattling the crossbar in the shootout. Worked really hard, but Rovers closed him down well, with Joey O’Brien a sticky competitor. Engineered a few openings, without being able to tease that final ball to where he intended, until that sublime half-volley. 6

Patrick Hoban: Plied a largely lonesome furrow in attack having been deprived of service for much of his time on the pitch. Laid off neatly for Seán Murray to have a shot in the second half. Dropped deeper when Georgie Kelly came on, but his substitution was surprising with the game meandering towards spot-kicks. 6

Daniel Kelly: Livened Dundalk’s attack with his pace and willingness to take on Rovers. The Lilywhites looked more balanced with him on and Jamie McGrath in the middle. 6

Georgie Kelly: Offered a fresh presence up top and played a part in Michael Duffy’s equaliser. Could have won the game at the end of extra-time, but a fine input all the same. A hugely exciting option. 7

Jordan Flores: Showed well when coming into a stretched game. Linked the play and always made himself available to receive possession. Scored in the shootout, just. 6

John Mountney: Harshly yellow carded before entering the fray for an incident incited by Rovers’ Joey O’Brien. May have started only for his recent injury. 6 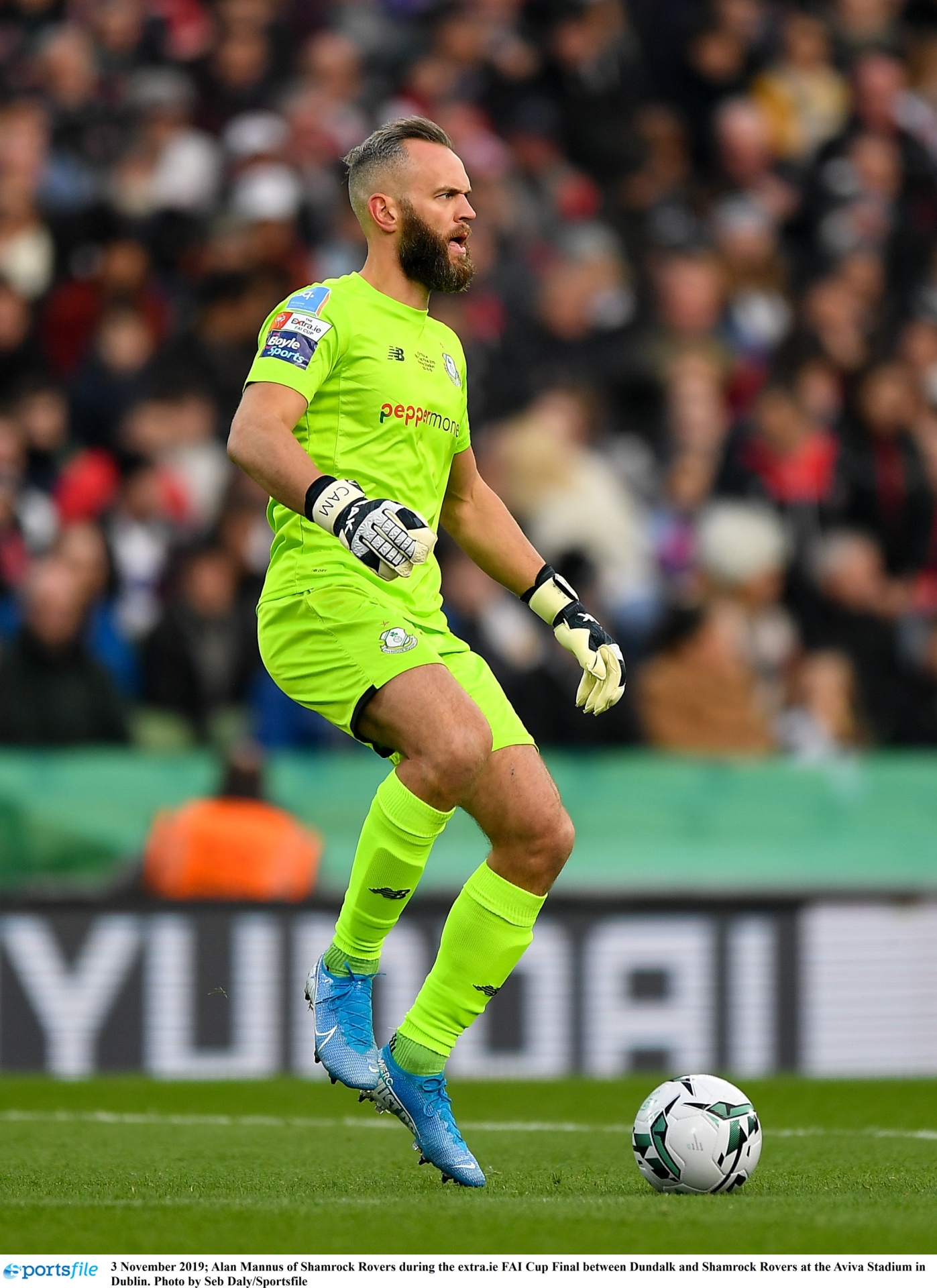 Alan Mannus: Pulled off a number of fine stops, including from Daniel Cleary in the shootout. Refused to face the tri-colour during the National Anthem beforehand, something which ought to be highlighted by the wider press. 7

Ronan Finn: Relentless, just as during his days with Dundalk. Should have scored early on having skipped inside Dane Massey. The longer the game went on the stronger Shamrock Rovers’ captain appeared to become. 8

Joey O’Brien: Handled Michael Duffy and fared well when playing out from the back. 7

Roberto Lopes: Named as the official man of the match without doing anything overly spectacular. 7

Lee Grace: Composed and stylish. Read the game very well along the left side. 7 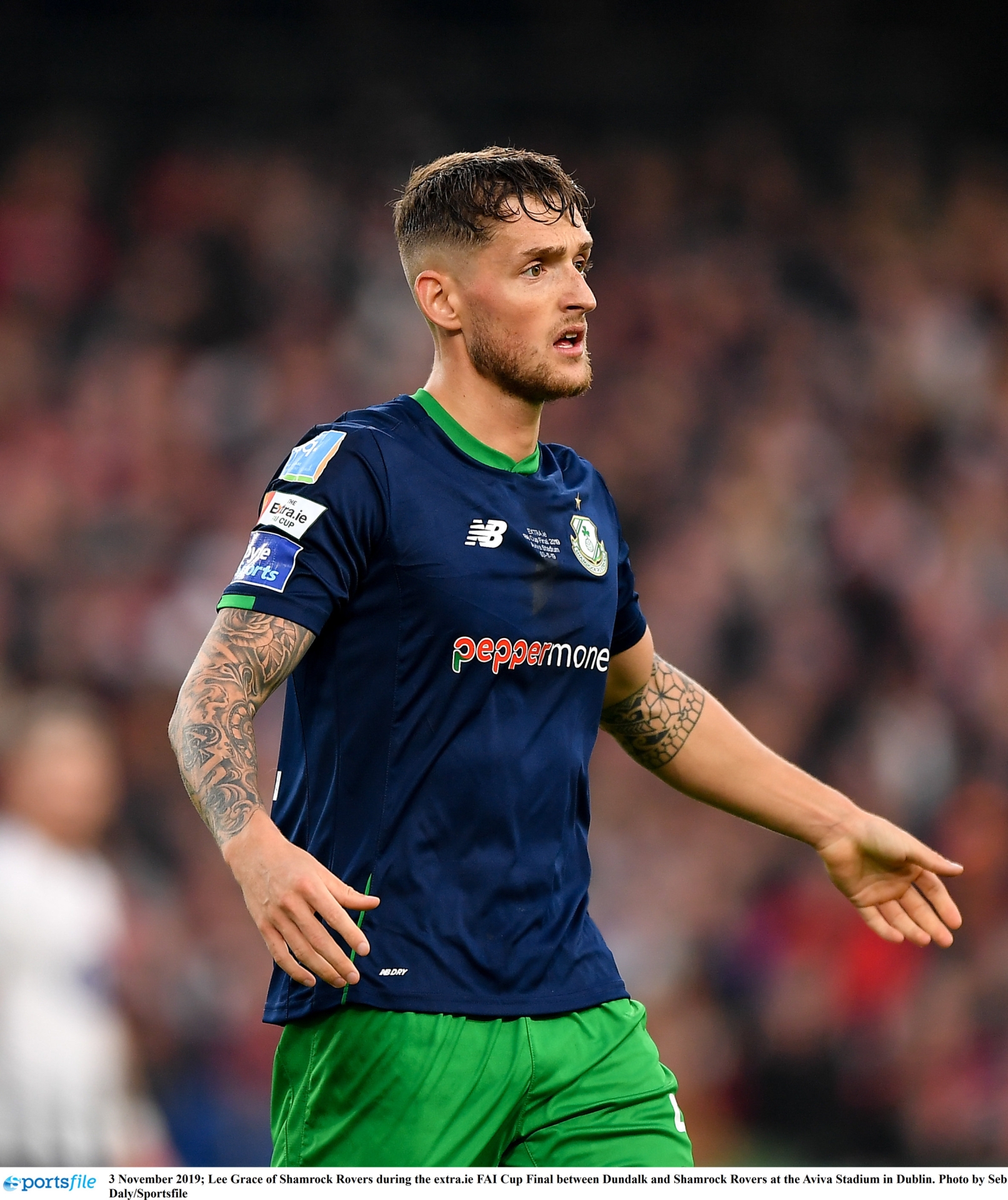 Seán Kavanagh: Started strongly, but faded, which led to his substitution. Had little to defend. 6

Graham Burke: Came to the fore during the second half when pushed further forward. Created the move which forced Gary Rogers to foul Aaron Greene for the penalty. 7

Aaron McEneff: Rovers’ best player on the day. Hugely impressive in possession and adventurous when fitting openings arose. Converted what seemed like the match-winner from the penalty spot entering stoppage time. 8

Gary O’Neill: Became a Rovers hero by stroking home the decisive kick in the shootout. Neat and tidy without doing anything out of the ordinary. 7

Jack Byrne: Dictated the play without being subject to the type of pressure necessary. Blasted home The Hoops’ first kick of the shootout. A touch of class. 8 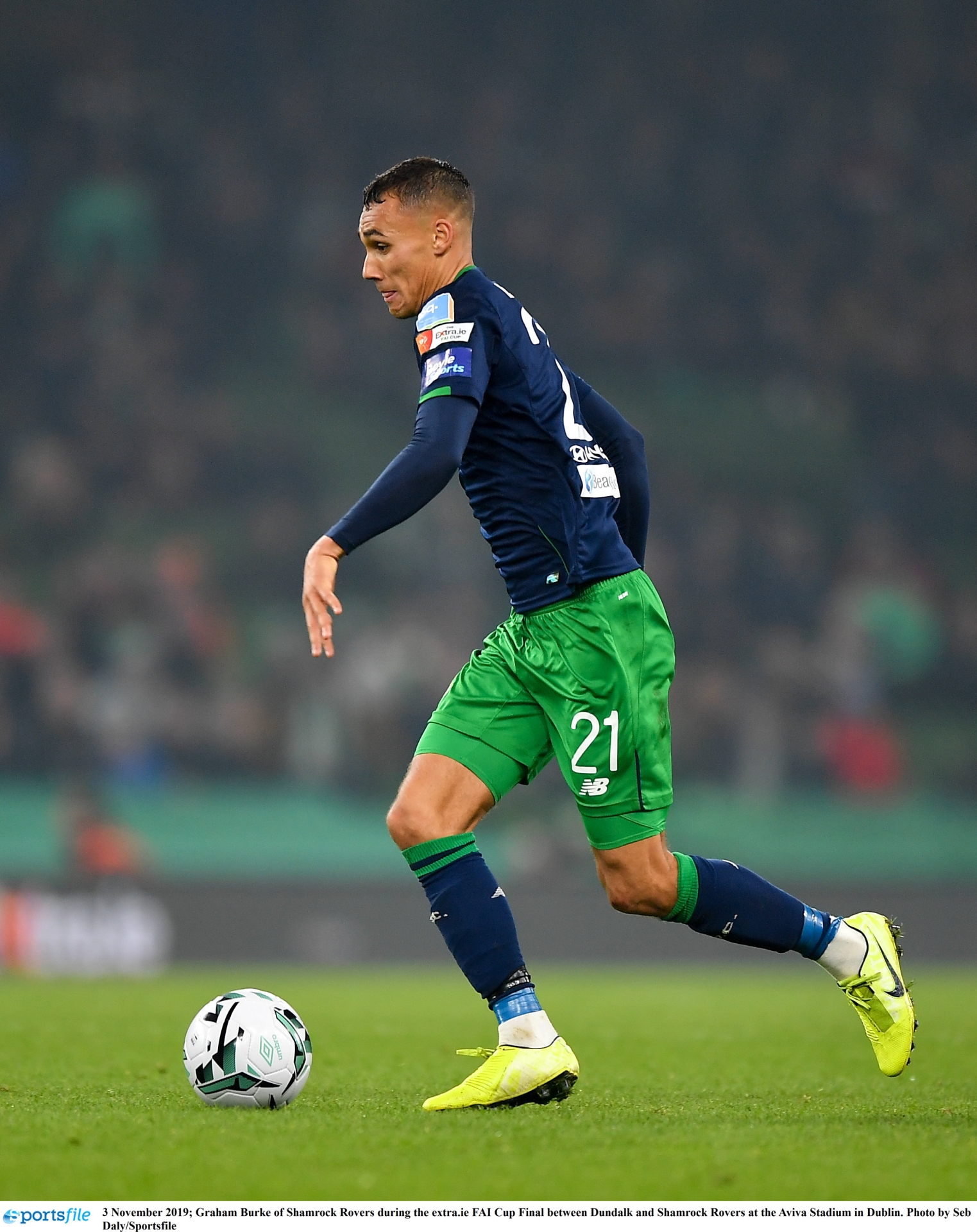 Aaron Greene: Worked selflessly. Could have scored early and set-up Finn subsequently. Fouled for a penalty. 7

Neil Farrugia: Struggled to outwit Seán Gannon having come in for Seán Kavanagh. 5

Greg Bolger: The former Dundalk man drove home a penalty in the shootout. 6

Daniel Lafferty: Involved in little of note when introduced on the left. 5