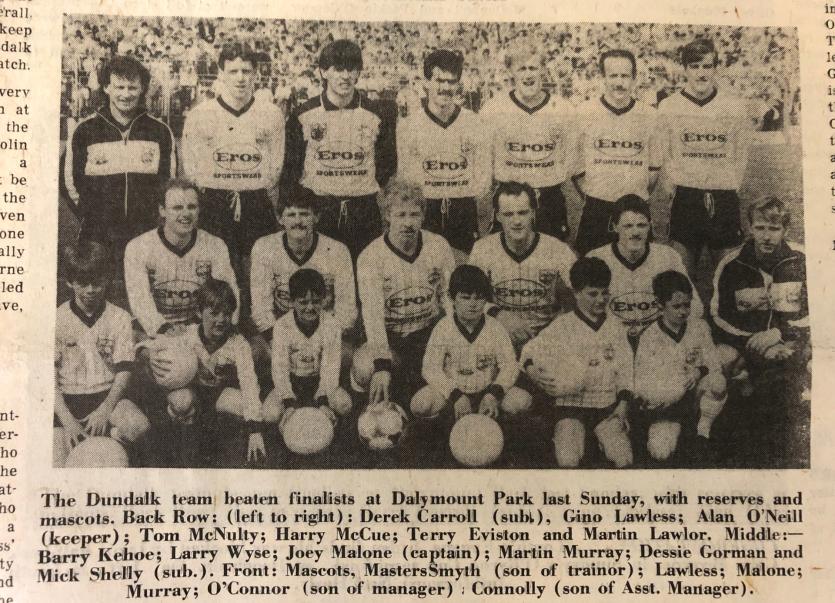 The Dundalk FC team before the 1987 FAI Cup final against Shamrock Rovers.

Of course, the latter are often referred to as ‘The Cup Specialists’, which can be construed according to individual perception. The Hoops are record 24-time winners of the title, but haven’t held the silverware since the last occasion on which the teams met in the decider, 1987.

Dundalk, meanwhile, are seeking to win the trophy for the 12th time, having also lost seven showpieces, including the finals of 2016 and two years ago. Their tally of triumphs has them second on the roll of honour.

Concentrating particularly on the clubs’ final clashes, below are snippets of The Democrat’s reports. 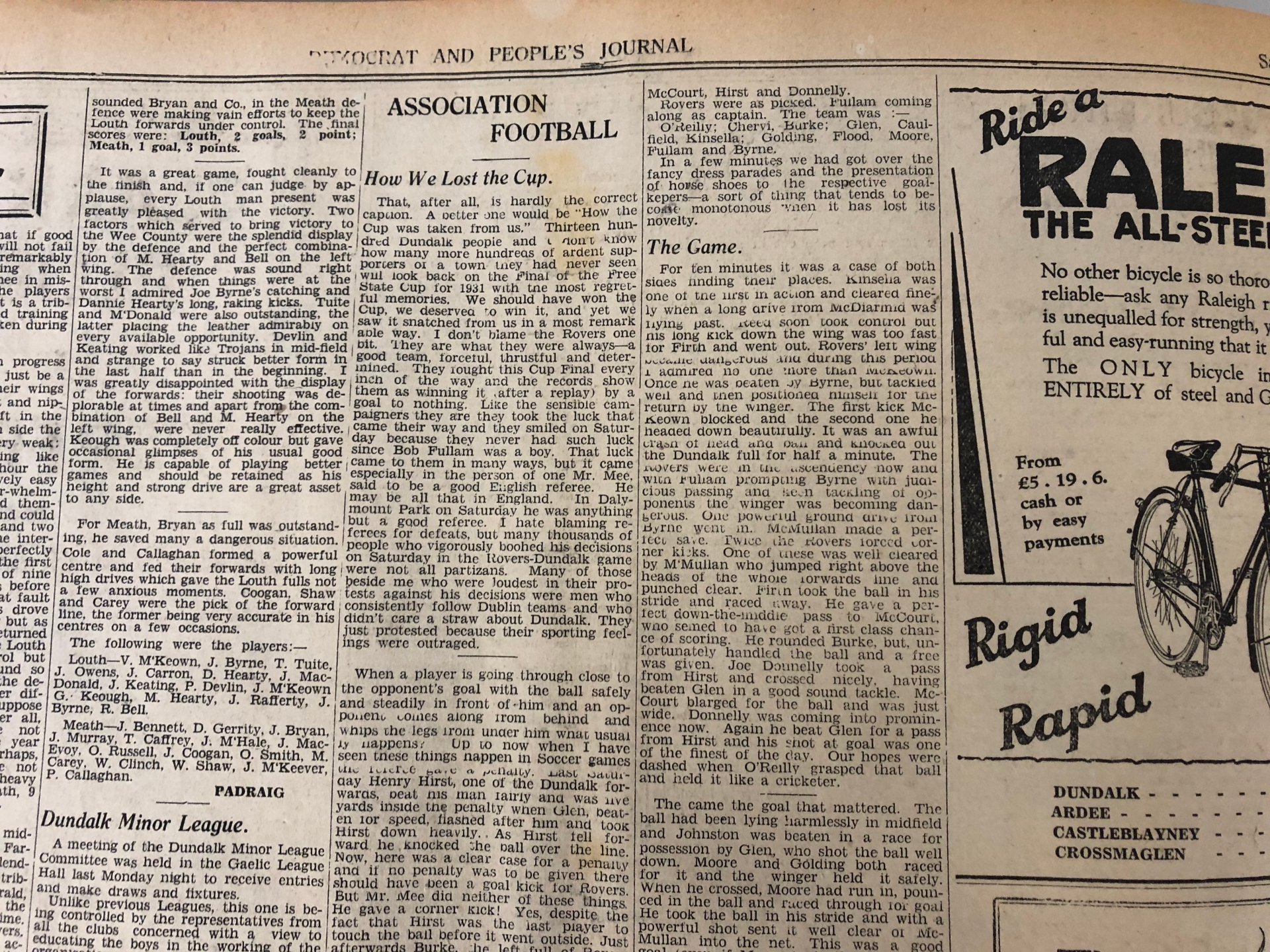 How we lost the FAI Cup

That, after all, is hardly the correct caption. A better one would be “How the Cup was taken from us.”

Thirteen hundred Dundalk people and I don’t know how many more hundreds of ardent supporters of a town they had never seen will look back on the final of the Free State Cup for 1931 with the most regretful memories.

We should have won the Cup, we deserved to win it, and yet we saw it snatched from us in a most remarkable way. I don’t blame the Rovers one bit. They are what they were always - a good team, forceful, thrustful and determined.

They fought this Cup final every inch of the way and the records show them as winning it after a replay by a goal to nothing. Like the sensible campaigners they are they took the luck that came their way and they smiled on Saturday because they never had such luck since Bob Fulham was a boy.

That luck came to them in many ways, but it came especially in the person of one Mr Mee, said to be a good English referee. He may be all that in England. In Dalymount Park on Saturday he was anything but a good referee.

BLAMING REFEREE
I hate blaming referees for defeats, but many thousands of people who vigorously booed his decisions on Saturday in the Rovers-Dundalk game were not all partisans.

Many of those beside me who were loudest in their protests against his decisions were men who consistently follow Dublin teams and who didn’t care a straw about Dundalk. They just protested because their sporting feelings were outraged…

In a final little things count for a lot. In Saturday’s game these big things just knocked Dundalk right off their balance. They did more harm to Dundalk than even the robust tackling of Glen Byrne and Fulham and were even more deadly than that splendid goal of Moore’s which kept the Cup in Milltown. 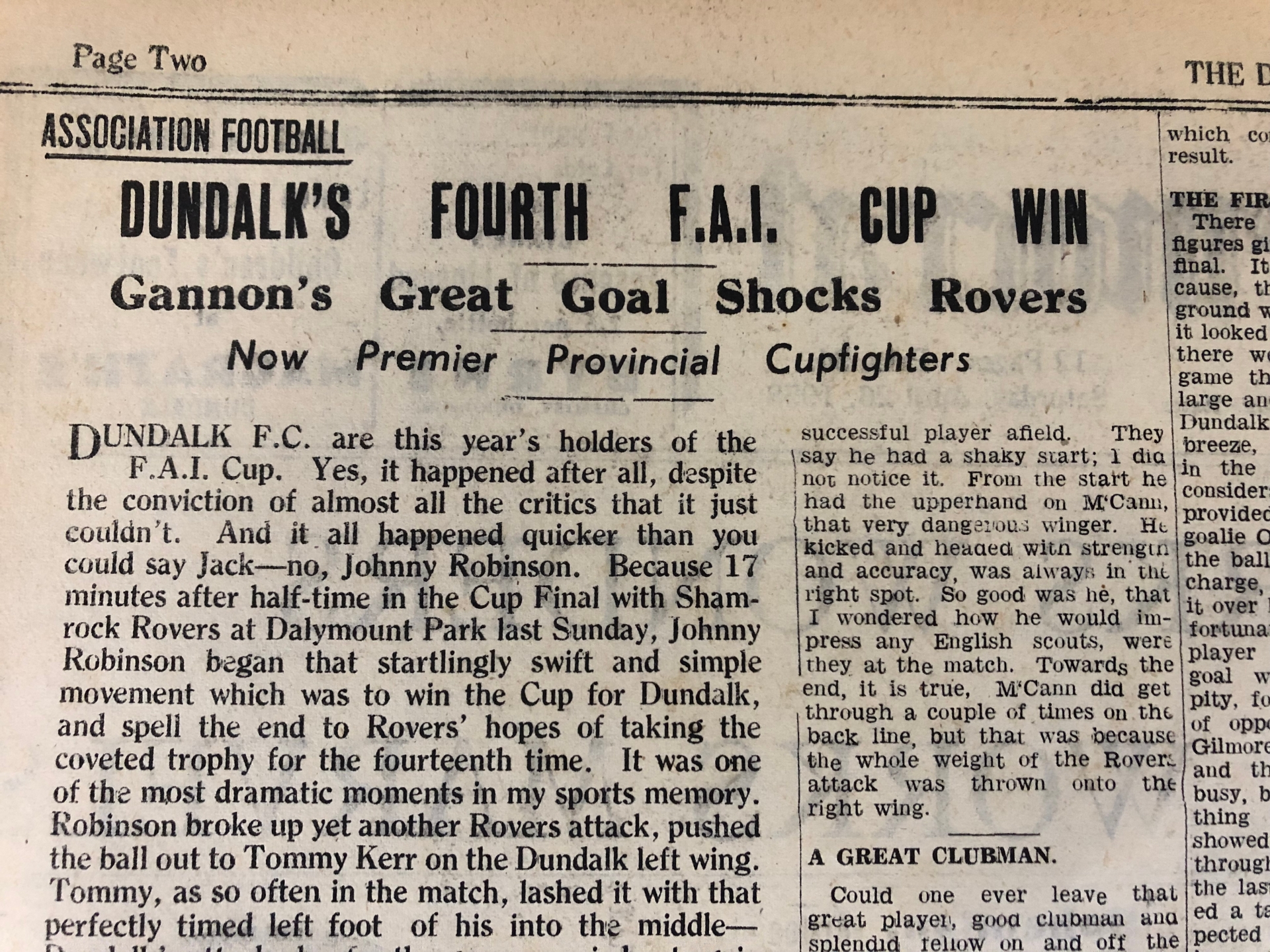 Dundalk FC are this year’s holders of the FAI Cup. Yes, it happened after all, despite the conviction of almost all the critics that it just couldn’t. And it all happened quicker than you could say, Jack - no, Johnny Robinson.

Because 17 minutes after half-time in the Cup final with Shamrock Rovers at Dalymount Park last Sunday, Johnny Robinson began that startlingly swift and simple movement which was to win the Cup for Dundalk, and spell the end of Rovers’ hopes of taking the coveted trophy for the fourteenth time.

It was one of the most dramatic moments in my sports memory, Robinson broke up yet another Rovers attack, pushed the ball out to Tommy Kerr on the Dundalk left wing. Tommy, as so often in the match, lashed it with that perfectly timed left foot of his into the middle - Dundalk’s attack plan for the game, carried out again and again through the ninety minutes.

Up for the high ball went Vincent Gilmore, higher than young Farrell, Rovers’ centre-half, and he headed the ball goalwards as Hubie Gannon, Dundalk’s most likely goalscorer, rushed in in that determined, steamrolling way of his.

The ball hopped in the goal area with Mackey, Hennessey and goalie O’Callaghan apparently in position to clear it. But they didn’t reckon with the hurtling Gannon, who flashed between them, rose like a pheasant to head the ball past the bewildered Rovers goalie, and himself crash to the ground knocked almost senseless by the crashing momentum of his drive, and lying there with a fractured jawbone as delighted Dundalk players hugged each other, and thousands of Louth men and women, boys and girls, went wild.

TREASURED MEMORIES
It was a moment which will not be forgotten among the treasured memories of Louth sportsmen and women, nor will the throbbing 25 minutes that followed.

The anti-climax to that goal, when Rovers swept down irresistibly on the left, Tommy Kerr did that inexplicable thing men do in the excitement of the moment, and handled what was probably a safe ball, and the ref pointed to the penalty spot.

The moments of tension and the ball shot by Hennessey wide of the Dundalk posts… what an anti-climax!

And the thrills that followed as Rovers flung everything into desperate efforts to force that equalising goal that never came; the acrobatic saves of Ted McNeill and the heroic resistance put up by the heroic Dundalk defence - surely fit to vie with the greatest defence the club has ever had - which held the Rovers, shaken out of the composure born of one-time mastery, scoreless to the end. 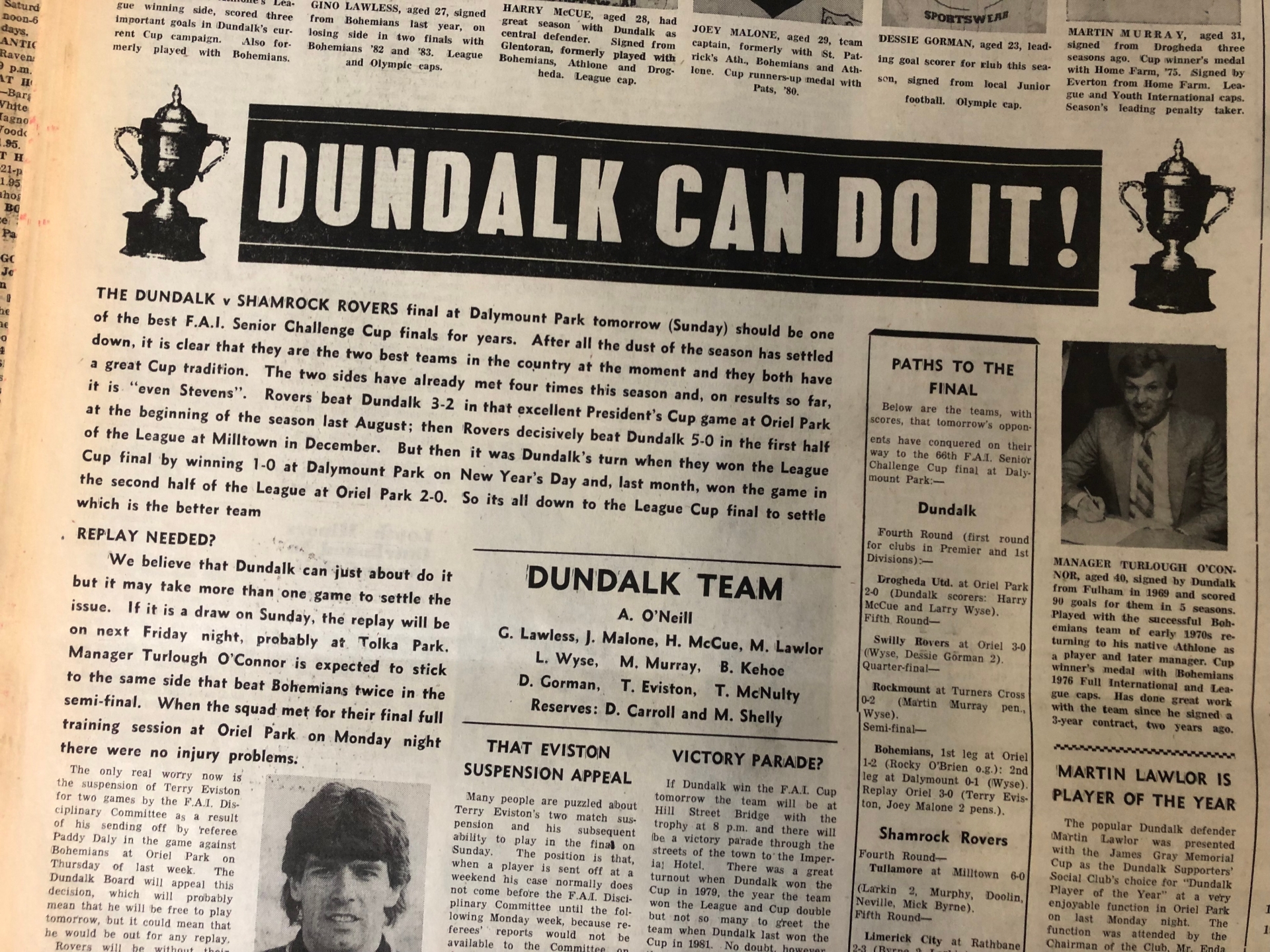 In memories packed with sports pictures down the years, those thrills will never be forgotten.

Dundalk are the most successful provincial club in the history of the FAI Cup. They won it four times, with the three Cork teams, Fordsons, Cork United and Cork Athletic, each winning it twice. In addition, Dundalk were three times runners-up. And they appeared in countless semi-finals.

There was great disappointment among the many Dundalk fans who travelled to Dublin on last Sunday with the performance of their team in the FAI Senior Challenge Cup final against Shamrock Rovers at Dalymount Park.

“We never really got started” remarked Barry Kehoe as he left the pitch with his runners-up medal after the game, and this just about sums-up the display of Dundalk in the game.

Outplayed in all departments, they managed to keep the score down to a single penalty goal until the last ten minutes, but, in the end, it had to be admitted that they were outplayed by a superior Shamrock Rovers team on the day.

Bad as the 3-0 defeat in the game was, however, far worse was the behaviour of some of the so-called Dundalk ‘supporters’ before, during and after the match.

Something between 1,500 and 2,000 people had travelled to Dublin for the game and they were joined in the city by hundreds of Dundalk supporters living in and around Dublin.

The vast majority of these people were totally disgusted by the behaviour of a relatively small number of hooligans sporting Dundalk colours.

Eleven people were arrested, arising from the disturbances, but it is clear that many more were very lucky to escape the rigours of the law.

While it is true that many of the Shamrock Rovers supporters were no angels, it was clear that the Dundalk followers were mainly responsible for the trouble and it was also very obvious that drink was the root cause. 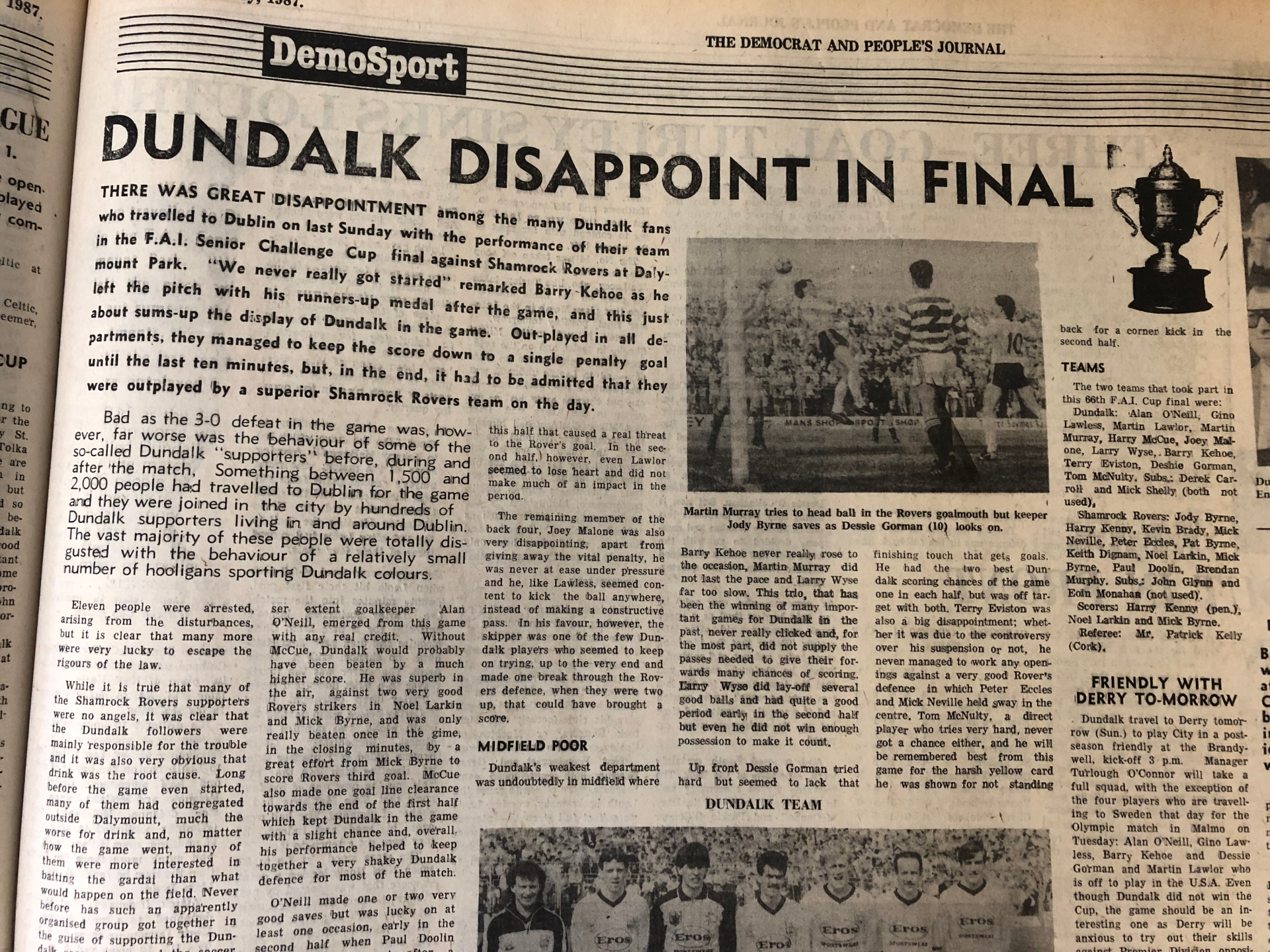 Long before the game even started, many of them had congregated outside Dalymount, much the worse for drink and, no matter how the game went, many of them were more interested in batting the gardai than what would happen on the field.

Never before has such an apparently organised group got together in the guise of supporting the Dundalk soccer team and the soccer authorities in general and the Dundalk club in particular, will ignore the growing threat to their sport at their peril.

Otherwise, it won’t be long before decent people will not want to go next or near to a professional soccer game in this area.