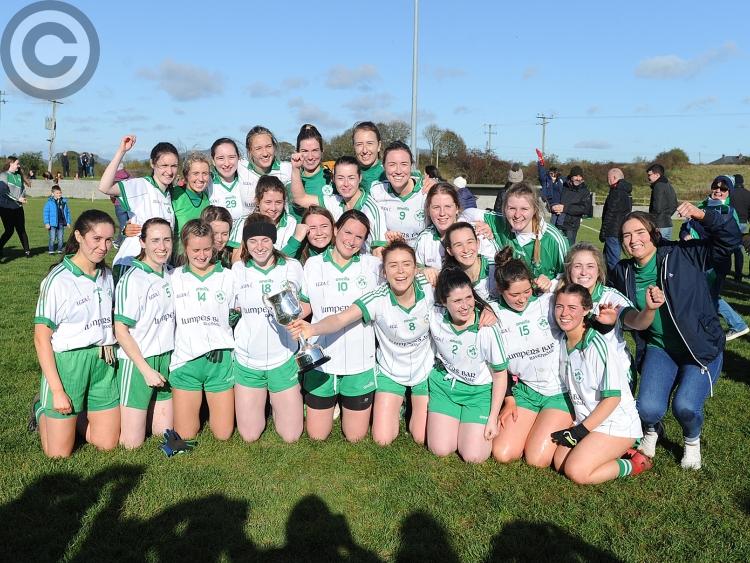 Kate Flood put on a second half exhibition of point-taking as St. Patrick’s completed the intermediate league and championship double in Kilkerley on Sunday morning. (Pic: Arthur Kinahan)

Kate Flood put on a second half exhibition of point-taking as St. Patrick’s completed the intermediate league and championship double in Kilkerley on Sunday morning.

The Louth star, who leaves for Australian Rules duty during the week, was ultimately the difference between two otherwise evenly-matched outfits, that went at it hammer and tongue for over an hour in pursuit of the Division Two crown.

Yet, for the second time within a matter of months, Dublin referee Finbarr Shanahan was the chief talking point among members of both camps. Pat’s contended that Roche ought to have had players disciplined for challenges and while this may have been the case, the Lordship side’s free-count was astronomical in comparison to Emmets.

Roche were five in front after Sarah McArdle’s goal early in the second half, only for Flood to take centre stage, converting eight times - from play and placed kicks - as Pat’s appeared to run out deserving victors. It must be said, though, that Roche seemed to be out of favour with the whistler during this spell.

However, there is a bigger issue at play here, one which was discussed the length and breadth of the ground stood on by the large gathering of spectators. Never mind that Roche have previous with Mr Shanahan, following his calling of their SFC semi-final loss to Cooley Kickhams, but why was a Louth man not appointed to take charge of the game, considering that it’s been widely speculated that there were several willing?

It must also be asked: Why not appoint outsiders for duty in both finals? Or, with Mr Shanahan’s pedigree as an inter-county official, how was he overlooked for the Division One showpiece instead? The County Board’s actions have caused widespread discontent.

But, getting back to on-field matters, Pat’s shaded the encounter and had the crossbar not come to Roche’s rescue on occasions, the gap could have yearned by full-time. With the breeze, Mickey Heeney’s charges improved as the opening period progressed, leading by three twice, including 0-9 to six at half-time.

And when McArdle expertly dispatched to the net after great play by the excellent Louise Byrne, they looked destined for victory. But Flood - and the impressive Meg Woods, had other ideas and when she gets going - few can stop her.