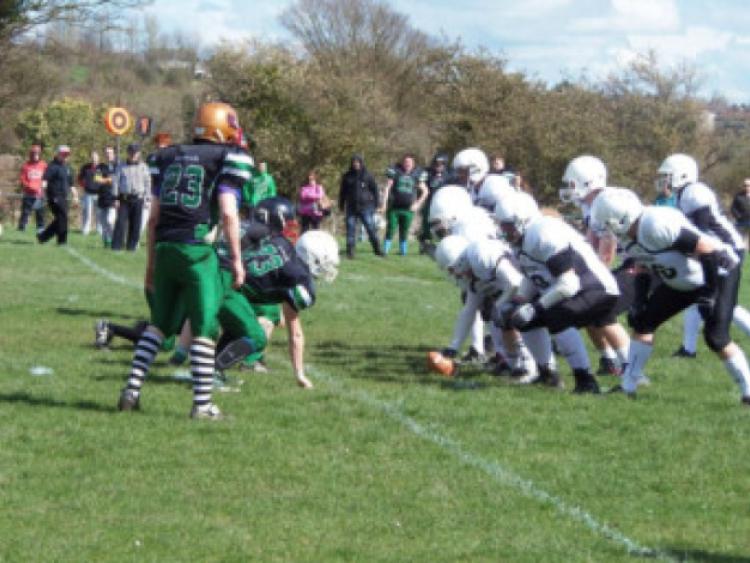 Dundalk Mavericks made a successful debut in IAFL2 with a 15-6 win away to the the South Kildare Soldiers.

Dundalk Mavericks made a successful debut in IAFL2 with a 15-6 win away to the the South Kildare Soldiers.

The two newly established teams played out a supremely entertaining match, one that belied both teams inexperience. Showing no debut nerves at all, the Mavericks immediately took the game to the home team following the kick off, forcing a quick three and out of the Soldiers offence. But on the ensuing punt, their safety Ruairi MacArtain ran the ball back effortlessly for the team’s first ever touchdown and with kicker Matty Hagan easily slotting over the extra point, the Mavericks led 7-0 after just a few minutes of play.

The teams traded blows for the rest of the quarter. The Mavericks made excellent ground through their running game, thanks to backs Robbie Caldwell, Anthony Vize and Robert Shevlin. Despite dominating possession,the yards failed to turn into scores but the Mavericks defence were tormenting the Soldiers, and as the half drew to a close, the pressure turned to a score. Barry Durnin’s excellent punt left the Soldiers beginning a drive on their own one yard line and despite a brave stand, linebacker Conor Lennon broke through the ranks with an endzone tackle, thereby scoring the Mavericks first safety. The Mavericks went into half time with a 9-0 lead.

However, they were quickly caught out at the beginning of the second half, as the Soldiers attempted and recovered a daring onside kick, one which NFL fans will remember was a move that paid dividends for the New Orleans Saints in the 2009 Superbowl. A brave call, it took all at the venue by surprise.

The Soldiers could not capitalise, as the strong Mavericks defence quickly regrouped, upped tempo and pushed for more scores. They were rewarded for their efforts towards the end of the third quarter, when a mis-communication on a punt from the Soldiers led to a fumble. The ball was happily picked up by Mavericks defensive end Guntis Vitolins, who ran it in for the touchdown. An unsuccessful PAT left the score at 15-0 to the Dundalk team.

As the fourth quarter ticked by, the Soldiers pushed to get a score on the board and caught out the Mavericks with a pass, which WR Sean Douglas ran back for an impressive 98 yard touchdown. But determined to keep the lead, the Mavericks offence took the lead, entrusting the ball to running back Robert Caldwell.

Thanks to some impressive blocking from a determined offensive line, and great running from Caldwell, the Mavericks kept possession and ran the clock out. As the final whistle blew, celebrations broke out for the teams 15-6 win.

A hard earned first victory, the Mavericks now sit a top the table, as they await the visit of the Tyrone Titans to DKIT on the May 11.