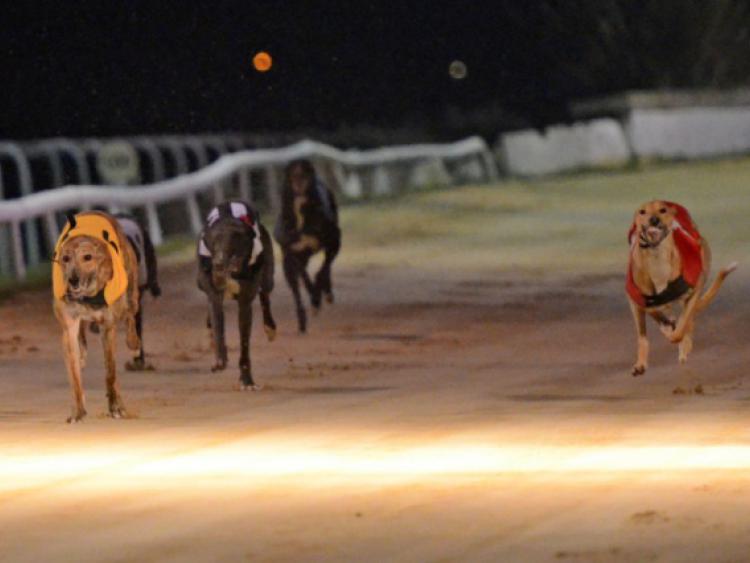 Racing at Dundalk Stadium on Saturday night provided Shane Grimes with a much-needed boost after the local lad sustained a nasty injury while playing in the United Park derby tie, 24-hours earlier.

Racing at Dundalk Stadium on Saturday night provided Shane Grimes with a much-needed boost after the local lad sustained a nasty injury while playing in the United Park derby tie, 24-hours earlier.

One of Drogheda United’s most valued defenders, Grimes shipped a hand injury as he and his colleagues tried to pull over Dundalk in the Malone Cup tie.

The tie went the home side’s way after a penalty shoot-out, but it finished with the 26-year-old having to retire, and his worry is that he won’t be ready for the rematch coming up on the day the league gets underway.

The dogs were better, the one Grimes owns in partnership with Peter McArdle triumphing in a heat of the Racecourse Road 400. Fiftyildoya, the subject of a few tasty wagers, ran from trap two, and although led early on, the June pup had the pace to get to the first bend in front.

The daughter of Tubbertelly Dubh lost nothing at the bends, and she was well clear in the home straight. Another local runner, Dine Chick, jointly-owned by Ned Lawrence and Colm Farrelly, ran on well to be second, but was still four lengths behind the impressive 22.11 winner.

Third place went to Paddy Kerr’s Banshee Tom, and he, along with the fourth-placed Lip Bound advance to this Saturday night’s semi-finals.

Monleek Empire, owned by Rita Downey, took the opening semi-final, and in the process recorded the fastest time, 22.08. The Tullyallen runner made it difficult on herself, checking at the opening bend, but she recovered well to edge out Clonrooske Bound in a photo-finish.

Thats The Story was the other heat-winner, and as luck would have it, the Belfast-owned dog has been drawn along with each of the other two Saturday night scorers in the first of the semi-finals.

There were three graded race winners on Saturday night’s card, one of them, Tolka Bob, running a blinder to record the night’s fastest time for the 525.

Owned by Togher men, Thomas Butterly and Michael Doyle, and trained by the latter, Toka Bob never saw another runner as he sped his way over the sand, and in winning by five lengths clocked a best-ever 28.74.

Racing opened with Mr Furious, the only previous winner in the race, scoring for Channonrock’s Seamus Casey – and then in the concluding event, Belmur Nobby scored a last-ditch win for Drogheda-born Marian Park resident Derek Murtagh.