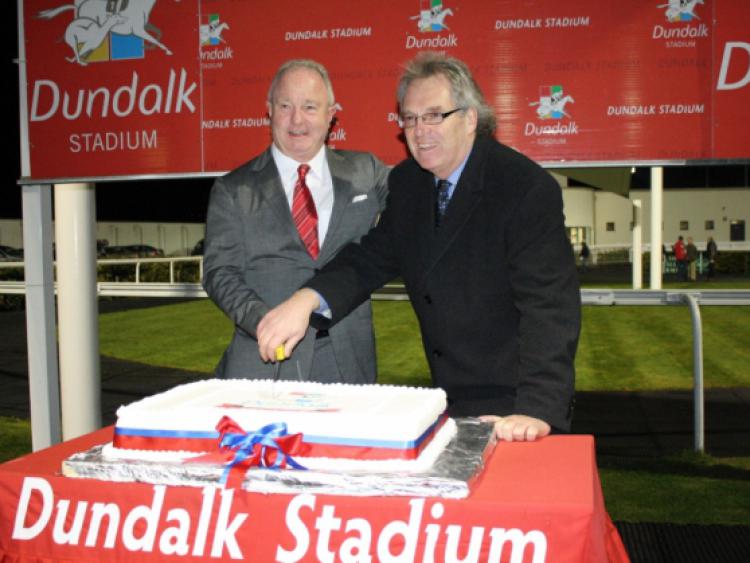 Lots of regulars, new customers, shareholders, directors and many more arrived for the night’s entertainment of horse and greyhound racing followed by live music by the Long Riders.

The cutting of the cake ceremony took place in the parade ring with Leo McCauley, Chairman and Jim Martin, CEO of Dundalk Stadium. The cake was so large that the remainder was cut on Saturday night for our many regulars attending greyhound racing that night.

A commemorative race card included photographs of the old Dundealgan Greyhound Track and the old Dundalk Race Course for those who wished to reminisce on days gone by and compare to the outstanding facilities that now house both sports.

“When we opened for greyhound racing in November 2003, Ireland was in the midst of one of the greatest boom periods the country has ever witnessed”, said Leo McCauley, Chairman of Dundalk Stadium.

“In the difficult, intervening years, I am pleased to report that we have managed to keep the long and proud greyhound and racing heritage in Dundalk well and truly alive.

“We are very proud that our stadium is major asset for the north-east region, contributing to the sporting, social and economic life in the area. Dundalk is now the busiest racecourse in Ireland.

“I am very pleased to say that the board have a vision to bring back national hunt racing to Dundalk. However, we are at the very early stages of this development and there are many hurdles to be crossed.

“I want to pay tribute to Jim Martin, our CEO and his very loyal and dedicated team. We now provide employment for over 100 full-time and part-time employees.

“I would also like to say a very special thank you to all our patrons, shareholders, sponsors, the Irish Greyhound Board and Horse Racing Ireland for their continued support.”

Horse racing continues every Friday until December 20 when the Crowne Plaza Dundalk Leading Jockey & Trainer Awards will be celebrated. Current leaders are trainer Edward Lynam who is two wins ahead of Michael Halford at 19 wins and Jockey Shane Foley who is five wins ahead of Pat Smullen at 22 wins.