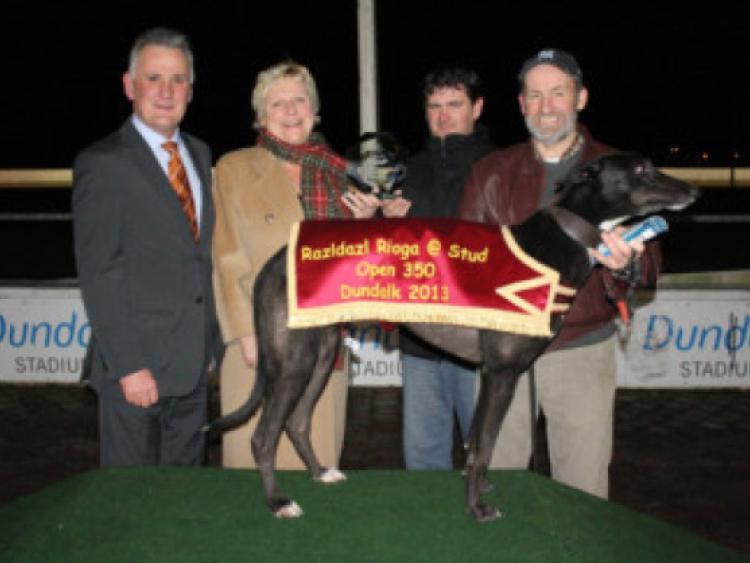 An excellent programme at Dundalk Stadium on Friday night, complemented the occasion that was in it – the track’s 10th birthday.

An excellent programme at Dundalk Stadium on Friday night, complemented the occasion that was in it – the track’s 10th birthday.

Five finals and three opens produced fare of the highest order, and if Mickey Cee Mayo was the winner that got the loudest greeting, it was because there was a huge crowd present from the West, and, according to reports, all of them dabbled in the market.

The son of Honcho Dexter is the first greyhound Mayo county footballer, Michael Conroy, has had his name attached to. The Davitts clubman was encouraged to get involved by his good friend and Mayo football fanatic, Danny Cawley, and Mickey Cee Mayo runs in their joint-ownership.

Formerly known as Usain Mayo, Mickey Cee turned in a flawless performance in the Catunda Kennels 550, winning his three rounds and improving on the clock as he progressed. As in the earlier rounds, he got away fast in the final, taking a nice lead into the back straight.

Colarhouse Jean challenged wide, looking a major threat at one point. But Mickey Cee wasn’t for passing. The now winner of nine from 21 galloped the whole way to the line to win by three-and-a-half lengths from Colarhouse in a night’s fastest 30.09, with Clondoty Leaona staying on for third.

The Mayo football team has a lot of unfinished business, and Michael Conroy wants to be there to see it done. But don’t be surprised if his name appears on race cards more often. Mickey Cee Mayo’s form has given him all the encouragement a beginner could wish for.

The biggest purse of the night was the €1,440 available to the winner of the Gourmet Island 525 final, and it went to Valeries Courage, the track’s recent-week revelation. This lassie was a four-race maiden before taking his place in this competition; now he has a record reading four from eight.

Trained on the Cooley Peninsula by Peter Noone for the Athboy, Co Meath father-and-daughter team of Christy and Denise Mahon, the son of Dukes Special has broken the 29-second barrier in each of his four wins, but more than that has been as resolute as they come, defending his lead against all-comers, only once having to come from behind in the competition.

Having taking an early lead, Valeries Courage was tackled by Sad Bean coming towards the third bend, with Craig Kelly’s Clogherhead-based Beretta Hawk joining in near the turn for home. He wasn’t for catching, however, and in the dash for the line reasserted to win by a length-and-a-half from Laurence and Brian Jones’ Sad Bean in a career-best 28.75.Beretta Hawk missed second-place money by a short-head.