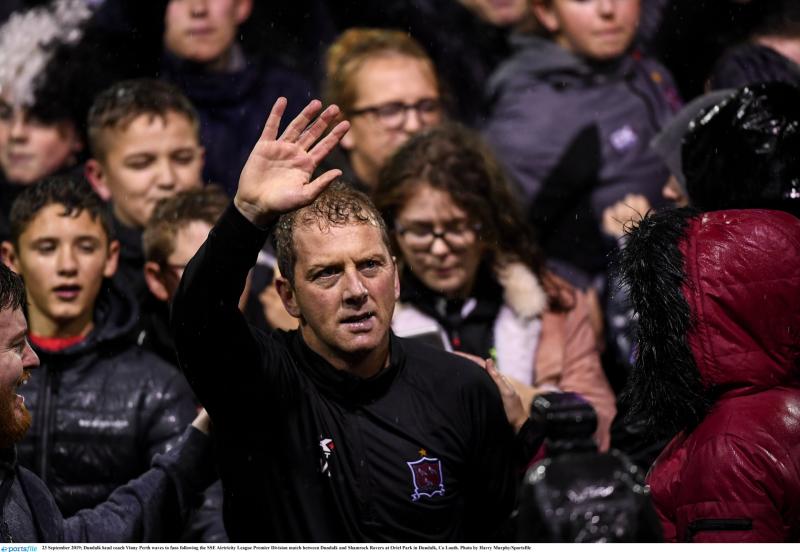 If Vinny Perth’s Dundalk team succeed in doing the business, you can only imagine the speed – and pride – with which IT’s most active correspondent will put pen to paper. (Pic: Sportsfile)

Jim McCourt’s message wasn’t expected at the Inside Track desk until after the Cup final. There’s a treble to be brought up at Oriel, and if Vinny Perth’s Dundalk team succeed in doing the business, you can only imagine the speed – and pride – with which IT’s most active correspondent will put pen to paper.

Anyway, while he doesn’t say so, his earlier than expected note could have been prompted by a sentiment expressed here last week.

“Dundalk fans should appreciate the success”, ran the headline. Jim agrees. “Enjoy it while we can,” he says, and then goes on to highlight what could be around the corner. “Look at Cork City. Up at the top for several seasons and now in danger of relegation.”

Dundalk’s long-time chief rivals playing in Division One is something he wouldn’t like to see. “Yes, we had our clashes with them, on the field, along the line and in the media, but I genuinely wouldn’t want to see them going down.”

Cock-a-hoop as he might be, glorying in the exploits of “the best Dundalk team in my 60 years going to Oriel,” Jim’s not an entirely happy camper. Not for the first time, he laments the “poor” turn-outs for home games.

“We have fans calling for a new 5,000 all-seater, but how many 4,000 crowds have we had? None. I’ve asked it before, does the town really deserve a team as good as the one we now have? Take those who come in from Cooley and other outlying places out for the big games and we wouldn’t touch the three-thousand mark. There should be more support from the town itself.”

That said, he expects a good representation at The Aviva for the final and is really looking forward to this meeting with Rovers, who, he’s certain, won’t lack for motivation.

“They’ll be all out to bring us down. They had that huge lead on us at the beginning of the league, and there were even many Dundalk fans I know saying it was all over. But with two games in hand I knew we had a chance of pulling them back. Look at what has happened in the meantime. This is their last chance to take something off us.”

Retaining the enthusiasm he had when first heading up the Carrick Road from his Barrack Street home, back in the 1950s, Jim can’t wait for the first Sunday in November. “It should be a great occasion, and a great game.”