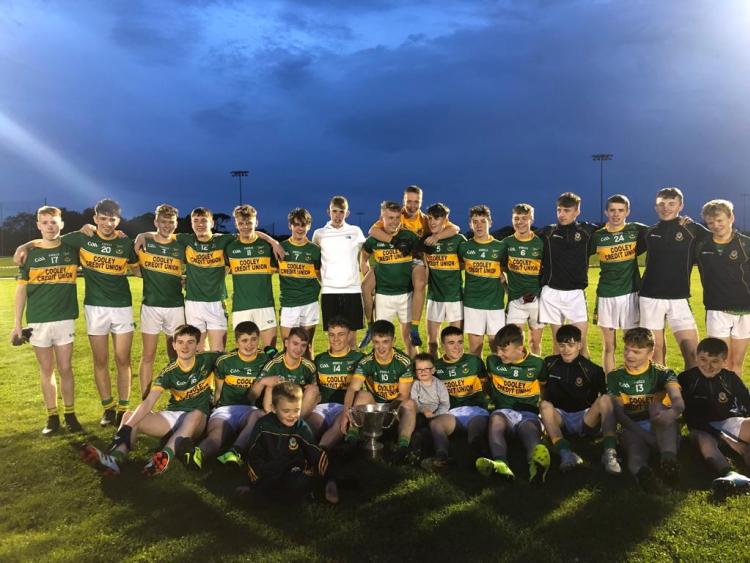 The victorious Cooley Kickhams/Cuchulainn Gaels team celebrate their victory over O'Raghallaigh's in the league final at Darver last Thursday night.

U16 Division One final

Cooley Kickhams/Cuchulainn Gaels completed the perfect U16 league campaign with a superb team display in the final against O’Raghallaigh’s played in windy conditions last Thursday in Darver.

Following hot on the heels of their impressive U17 championship success two weeks earlier, the peninsula side used the supporting wind to excellent effect to race into an early four point lead through three fine scores from Cian Connor and another from sweeper Cian Murphy.

With the midfield of Eddie Kirwan and Cormac Malone dominating possession, Cooley were working the ball forward well to create excellent attacking options. At the same time the tight-marking full back line of Seán McCarragher, Paul Brennan and Colm Keenan were well on top, restricting a very mobile O’Raghallaigh’s inside line to minimal scoring opportunities.

Gradually, however, O’Raghallaigh’s got into their rhythm and a fine move brought a great goal scoring opportunity for the Drogheda men, only for Thomas Fearns, Cooley’s young ’keeper, to deny them with a superb one handed save high to his right.

Cooley responded straight away with two quick points from Calum O’Hanlon and Cian Connor before a sharp turn and finish from the lethal O’Hanlon raised a green flag to push his team further ahead. An opportunistic point immediately before halftime from Enda O’Neill had the North Louth outfit leading by 1-7 to no-score at the break.

Playing with the wind, O’Raghallaigh’s started the second half at a hectic pace and quickly tagged on three points to bring themselves back into the game. Immediately, Cooley rebounded and another clinical finish from Calum O’Hanlon raised his second green flag of the day to restore his side’s ten point advantage.

But this O’Raghallaigh’s side were not beaten and two further points raised their hopes. However, the peninsula side never lost their composure as, marshalled by the dynamic half back line of Daire McDaid, Cathal Malone and Gerard Hanlon, they continued to work the ball out cleverly from the back.

One such move from one end of the field to the other yielded a great team point for O’Hanlon which was followed shortly afterwards by a well taken goal from dynamic full-forward Dylan Quinn set up by the intelligent play of Tommy McCarragher.

O’Raghallaigh’s fought back once more with three good points only for Cooley, powered on by substitutes Aaron Sheelan, John Digney, Christopher McQuaid, Darragh Brady and Caolan Haugh, to put the contest to bed with a minor score from Calum O’Hanlon followed by major and minor scores from the clinical Cian Connor.

A strong O’Raghallaigh’s side never let their heads drop and they deservedly secured their only goal late in the game giving a final score of 4-09 to 1-07 in favour of the green and golds.

The final whistle was greeted with great celebrations by players, mentors and supporters alike for what was a fantastic team performance which capped an unbeaten league campaign for this talented squad of players.

In accepting the cup Cooley captain Cian Connor thanked players, mentors, supporters and opposition alike and acknowledged that this was a victory built on hard work and organisation and delivered by a superb squad made up of players from the clubs of Cooley Kickhams and Cuchulainn Gaels with notable contributions through the campaign from younger players such as Ronan McMullan, Seán Quinn, Seán Brennan, Shane Rogan, Conal Donnelly and Stephen Mullen.