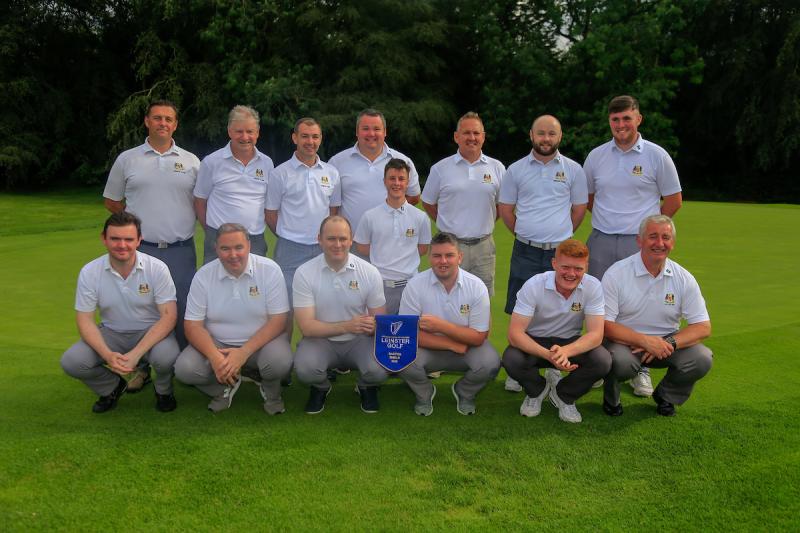 Dundalk Golf Club have retained the Leinster Barton Shield and booked their place in the All-Ireland semi-final in Westport at the end of September.

Last Saturday at Royal Tara Golf Club, Dundalk beat Woodbrook in the provincial semi-final in the morning before defeating The Island in the final to win a second successive senior pennant.

“Last year was the first time since the club was founded in 1905 that we won a senior pennant so to have gone out this year and retained it is very special and a great achievement by the lads,” said John Conlon, who jointly manages the team with Alan McCabe.

“But it is only a step towards our ultimate goal this year which is to win the All-Ireland title. We were very disappointed to lose in last year’s final and our whole focus this year has been on getting back to the national final and bringing a green pennant back to Dundalk.”

The Barton Shield is a competition for elite players with two two-man pairings playing, off scratch, in a foursomes matchplay format and the match being decided by the aggregate number of holes won.

Dundalk got a massive boost on the eve of the Leinster finals when Caolan Rafferty announced he was available to play after being knocked out in the second round of the South of Ireland Championship on Friday evening. 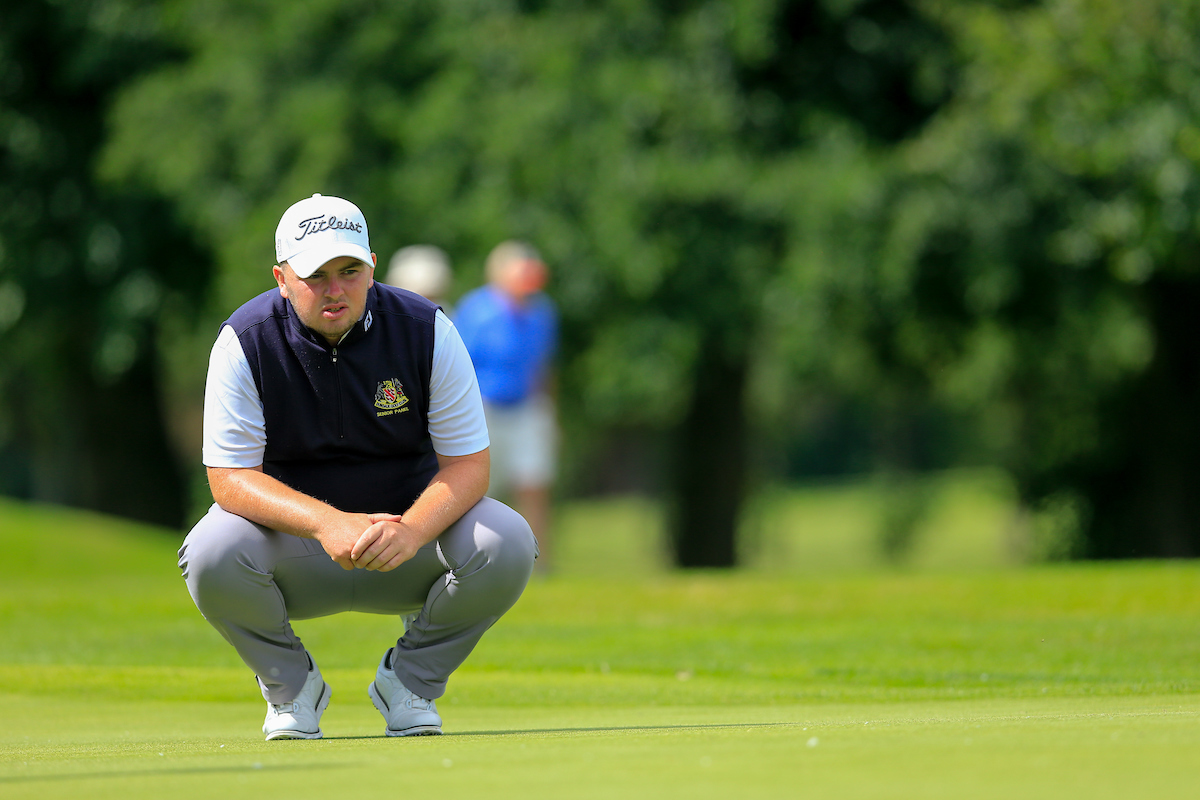 Quite how Woodbrook felt when the plus six handicapper, who has been named on the 14 man panel from which the 10 players to represent Britain and Ireland in the Walker Cup will be picked, teed it up isn’t known, but after winning the first hole they must have felt they were going to benefit from a post-Lahinch hangover.

It proved to be a short-lived feeling because on the second hole Rafferty fired an approach shot to 15 feet and his partner Eoin Murphy sank the birdie putt to bring the match back to all-square.

At the next hole, the Dundalk pairing went one up after Woodbrook put their third shot in the bushes behind the green and stretched their lead to two holes on the par four sixth when Murphy drove around the dog-leg to within 10 yards of the front of the green and Rafferty chipped in for an eagle two. Although they lost the seventh they turned for home three up after winning the eighth and ninth with birdies. They lost the 10th, but restored their three shot advantage on the 12th.

It was clear at this stage that this match was going to decide who would advance to the final because up ahead Josh Mackin and Brendan Lawlor were heading for defeat after a frustrating morning on the greens. After losing the first hole, they got back to all square by winning the third in par. However, they lost the fourth, sixth and seventh to fall three holes behind by the turn. 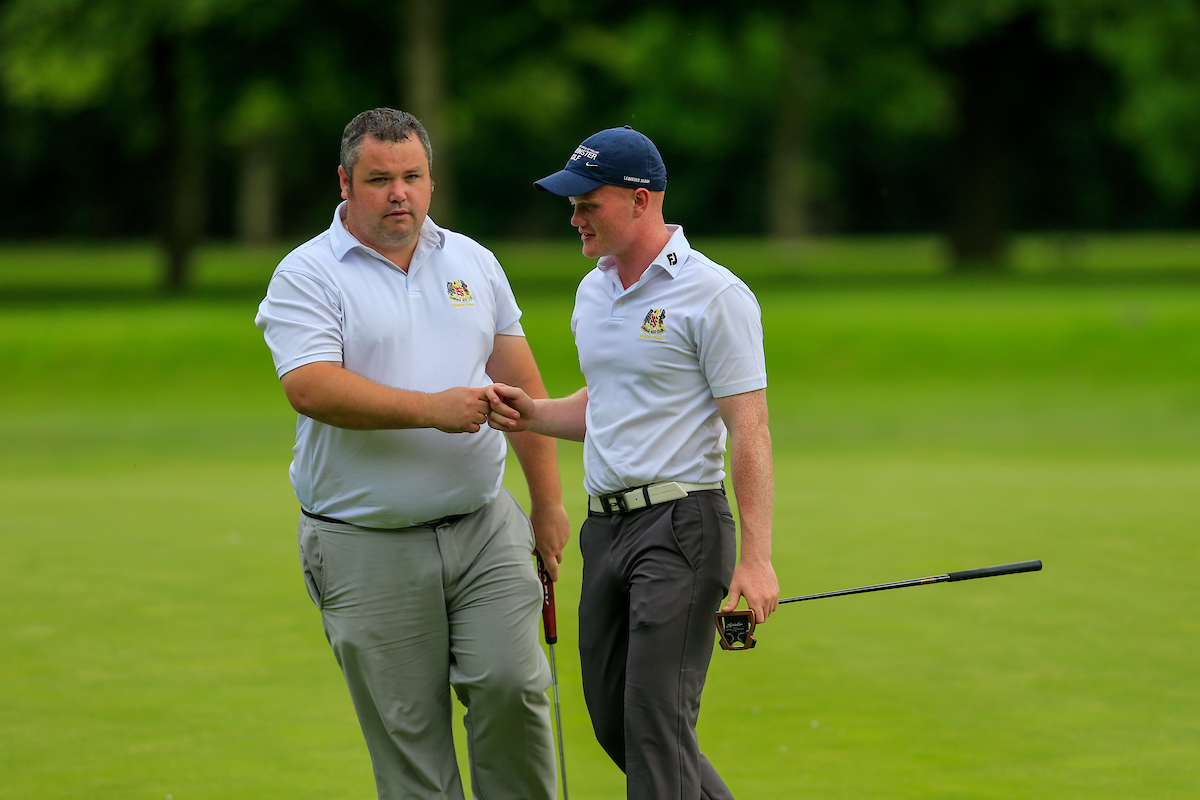 The Dundalk pairing did rally on the back nine by winning the 10th and 13th to reduce the deficit to one hole, but then lost the 14th to birdie and the 15th to par to find themselves three behind again with just three holes to go.

At this stage it was all about limiting the damage and hope that Rafferty and Murphy in the match behind could win by more than they lost. The youngsters dug deep to win the par five 18th, where Mackin found the fairway, Lawlor drilled a two iron 260 yards to off the back of the green, Mackin chipped on to three feet and Lawlor sank the birdie putt.

As that putt dropped, Murphy was pitching in to 10 feet on the 17th and when Woodbrook missed their birdie putt from 30 feet, Rafferty lagged his putt to the edge of the hole and Dundalk’s place in the afternoon final was secured.

The other semi-final between The Island and Palmerstown House went to 19th hole, giving the Dundalk players some extra time to recover before the final. The managers made one change for the afternoon with the experienced Aaron Grant coming in for debutant Brendan Lawlor as Josh Mackin’s partner in the top match.

“It was great to give Brendan his Barton Shield debut and let him get some very valuable playing time. His approach shot and putt on 18 were crucial to the win in the morning and being able to bring in a fresh and experienced Aaron Grant in the afternoon was a big boost,” said Conlon.

After halving the first three holes of their match against Jonathon Quinn and Rhys Clarke, Grant and Mackin got their noses in front by winning the fourth with a birdie. They extended their lead to two holes by winning the ninth with a birdie, but then bogeyed the par three 13th to go back to one up.

Behind them, things didn’t start so well as Rafferty and Murphy lost the first two holes to birdies by Fergal Kennedy and Jack Blake, but they won the third and brought the match back to all square on the seventh when Murphy holed a testy left to right breaking putt following a sublime chip by Rafferty from the back of the green.

A superb tee shot from Rafferty on the par three 11th to six feet set up Murphy for a birdie that put the Dundalk pairing in front for the first time and they followed that up with birdies on the next two holes as Murphy drained putts from 20 and 15 feet respectively to go three up with five to play.

The next three holes were halved and as the two Dundalk pairings went down the 17th they were lying four up overall with four to play. It all ended when Aaron Grant coolly sank a six foot putt to win the 17th in his match and seal a five hole victory for the defending champions.