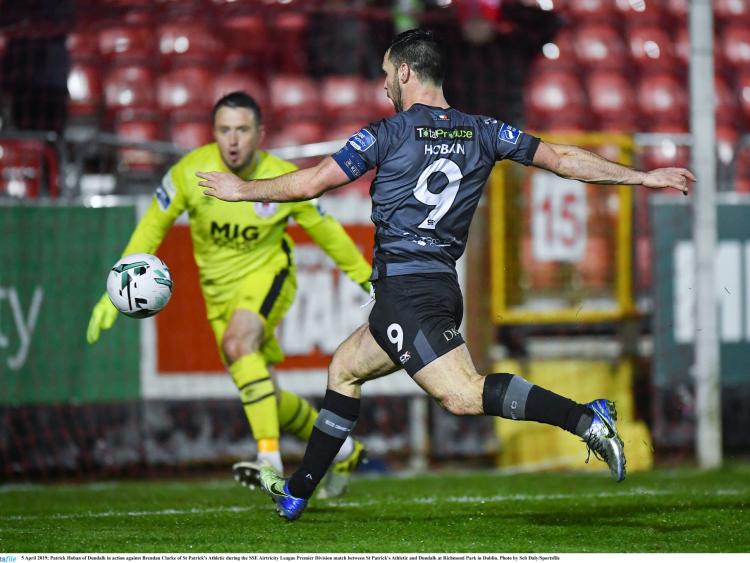 Dundalk FC must eat their bread and butter if they want to continue dining at the top table, say the champions, with full focus on their SSE Airtricity League Premier Division clash at St. Patrick’s Athletic on Saturday evening (Richmond Park, 5:30pm).

The game had originally been postponed from its Friday night slot, but has since been re-fixed, despite Dundalk’s impending departure to Azerbaijan.

The Lilywhites recovered from an early shock against Qarabağ to claim a well-deserved 1-1 draw in their UEFA Champions League second qualifying round first leg at Oriel Park on Wednesday evening, leaving the tie delicately balanced ahead of next week’s return.

They will make the long journey to Baku on Monday morning, but first, they must ditch the glamour of Europe’s elite competition and take care of domestic business.

Shamrock Rovers took advantage of Dundalk’s inactivity last weekend with a 7-0 whipping of UCD at Tallaght Stadium, which reduced the gap at the top to five points. 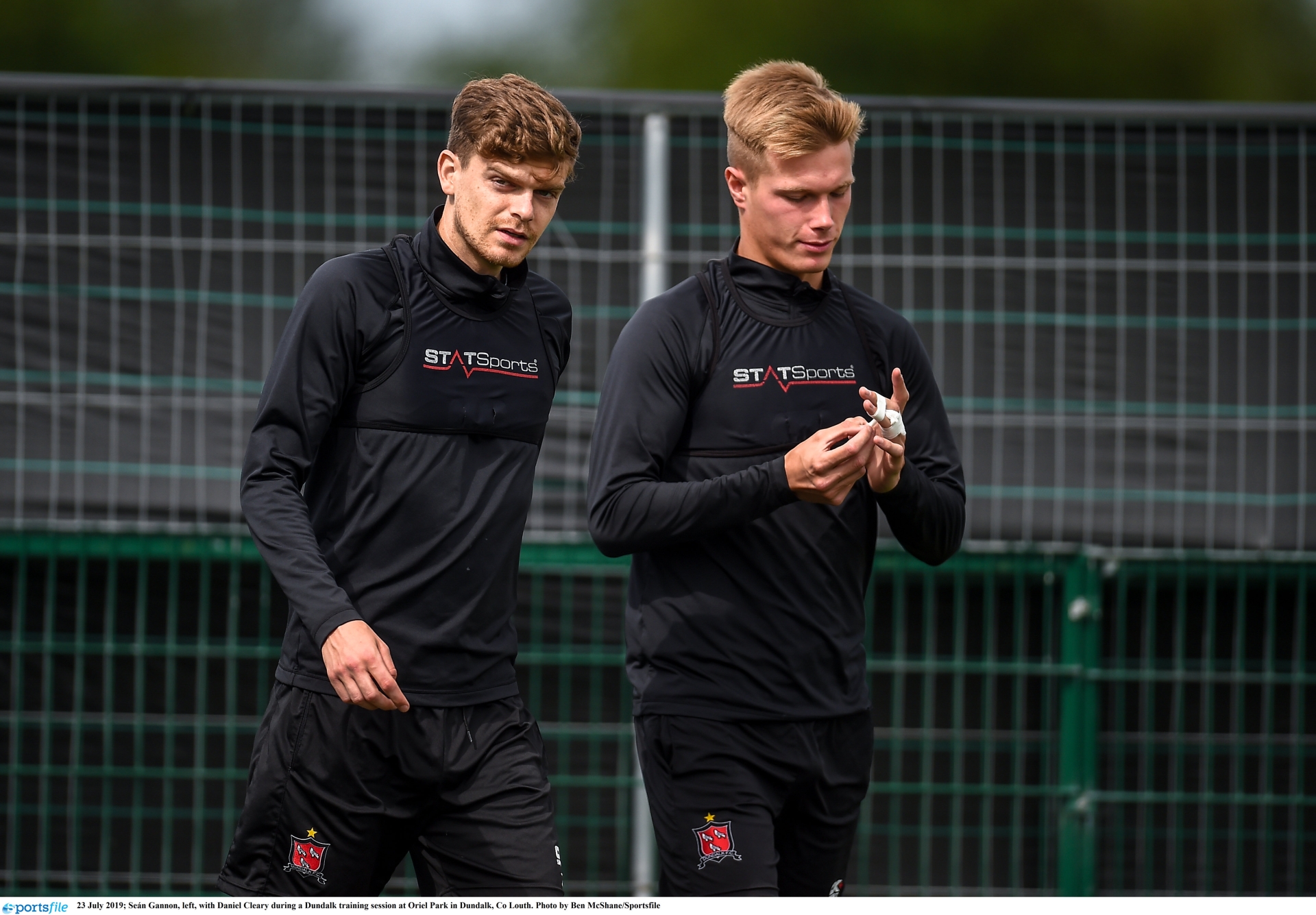 Vinny Perth’s players can now regain their eight-point advantage in the capital this Saturday – for 24 hours at least – ahead of the Hoops’ trip to struggling Cork City on Sunday (4pm), as Ireland’s two European hopefuls navigate their congested fixture lists.

Dundalk’s head coach spoke of a “special night” against Qarabağ on the Carrick Road, and he knows that they must not take their eye off the ball if they want to experience the same nights next summer.

“We spoke to the players after the Qarabağ game and said ‘if you want these special nights again, you’ve got to win the league’,” Perth revealed.

“We have got to refocus now ahead of St Pat’s. We had an amazing support up there the last time we played; our away support has been excellent over the last number of months.

“We’re going to need them again, because we’re going to have to go to the well on Saturday and get a big performance before we head off to Azerbaijan.

“You can play matches that don’t mean a lot, but this is what we want. We want to be involved in these big games and Saturday is just another one of them.”

Defender Seán Gannon – who won the league with St Pat’s in 2013 before subsequently winning four titles with Dundalk – reiterated the point, as he chases an incredible sixth league crown in seven years.

“We’ve got a big game now on Saturday and we need to focus on that first (before Qarabağ next Wednesday),” Gannon said, “because the only way you get these nights back is if you win the league.

“It’s a massive game for us on Saturday and that is where we’re looking at now. We’ve got to put all our energy into that and then obviously once the game is over and done with, we can start looking forward to the next leg.” 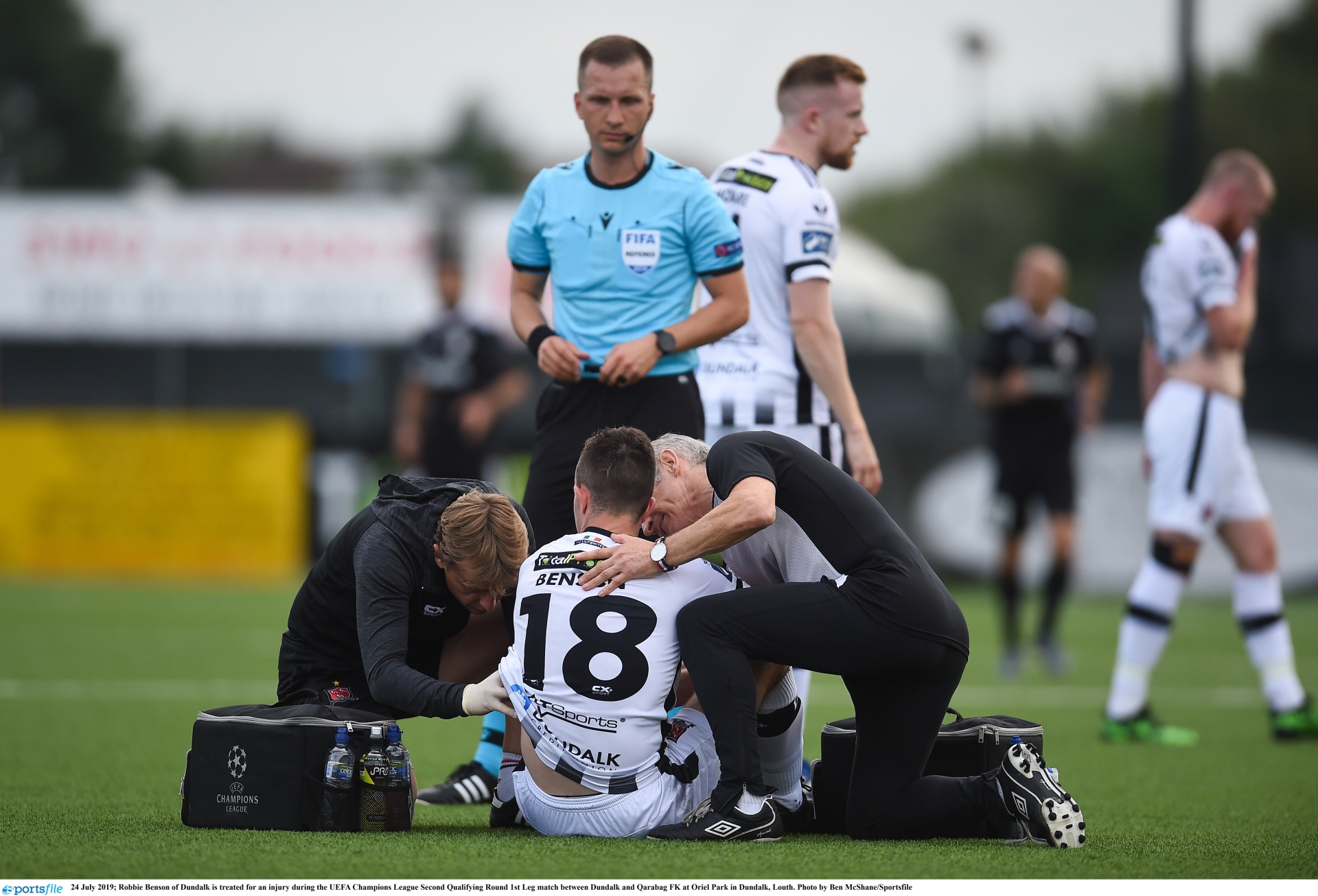 Robbie Benson is tended to by Dundalk FC's medical team on Wednesday night.

Dundalk are unbeaten in 19 games in all competitions since suffering back-to-back defeats by St Pat’s and Sligo Rovers in early April.

That loss at Richmond Park was particularly unlucky as the champions went down 1-0 after a late first-half own-goal from centre-half Daniel Cleary.

Cleary is likely to be called upon on Saturday as Perth freshens up his team, with Daniel Kelly, Dean Jarvis, Georgie Kelly, captain Brian Gartland and in-demand Cameron Dummigan others in contention for starts.

However, Robbie Benson’s rib injury sustained early on in the draw with Qarabağ means he joins Jordan Flores (hip) and Stephen Folan (knee) on the sidelines.

Gannon, though, believes Dundalk have the adequate resources to fulfil a league fixture between their two legs with the Azerbaijan outfit.

“We have got a seriously strong squad,” the 28-year-old said. “We’re well capable of games every few days and that’s just what we have to do.

“It’s a game that we have to go and win. We’re in good form, so we have to be going there confident. I think the strength of our squad will come out and you’ll see – I’m always saying, anyone in the squad is as good as each other and anyone can play.

“St Pat’s are a dangerous opponent in Richmond. We need to go there fully prepared; recover well and go to try to win the game.

“They have beaten us already; they have got very good players and on their day they’re a very good side. We need to show them a lot of respect. We’ll go there confident, with a good game-plan and try to get three points.”

Meanwhile, his fellow defender Andy Boyle – who has been a class act since recently returning from the UK – says Dundalk’s fixture list is a sign of their success and he would not want it any other way.

“We have to go and win the league – that’s what gives you the nights like this, that every player wants to be involved in,” Boyle added, as focus switched immediately following Wednesday’s 1-1 draw.

“When you win a league, they are nights you remember forever. When you retire, they’re the nights you’ll remember and the medals you have.

“We’ll do it properly over the next couple of days and we’ll turn our attentions now.

“The more games you play obviously means that you’re doing well in all competitions. It’s a good complaint. Of course, we’re enjoying it. They’re great nights and big games to play in.”

St. Pat’s, who currently lie in fifth with outside hopes of catching Bohemians in third, were outclassed in Europe by Swedish side IFK Norrköping, going down 4-1 on aggregate in the UEFA Europa League.

Harry Kenny’s men will now aim to get their league form back on track, after losing 3-0 to Bohs at Dalymount Park last Sunday.

However, they have given Dundalk plenty to think about already this season. The Saints won 1-0 when the sides met at Richmond Park on 5 April, with the Lilywhites edging the return 1-0 at Oriel Park in May after the most fortuitous goal from Seán Hoare at the death.

The teams also met in the EA SPORTS Cup in Dublin in April, with Dundalk winning 2-1 thanks to Georgie Kelly and Jarvis. James Doona had temporarily levelled for the hosts.

Dundalk’s last league outing was three weeks ago, a 2-2 draw at Derry City, with the champions this weekend putting their 15-match unbeaten run in the Premier Division (13 wins, two draws) on the line.