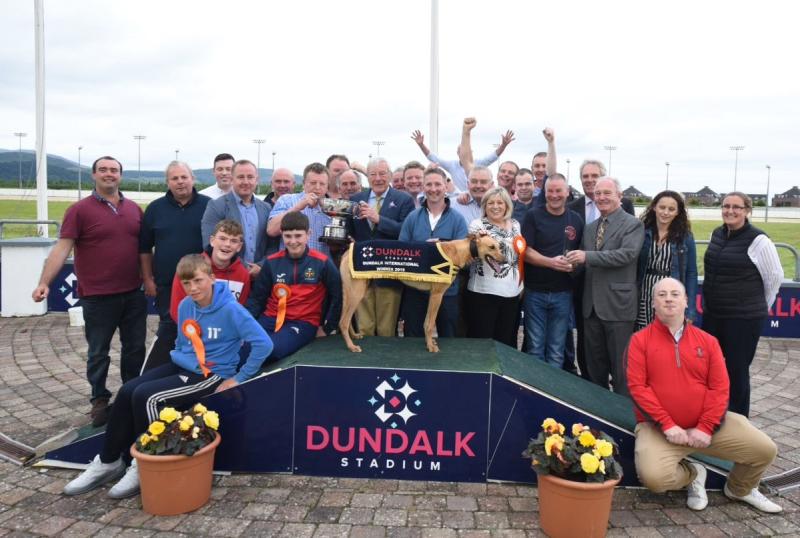 It could be argued that the 2019 champions, Ardnasool Lad and Killmacdonagh, rate as the best-ever winners of Dundalk Stadium’s two big annual showpieces.

When Ardnasool dashed to the line a little under a length clear of Cabra Hurricane last month, he was creating history, becoming the first to win the Bar One Racing Irish Sprint Cup for the second time. A few had attempted the double, but until this year none was successful, the short- distance Classic having been first run in 2004.

Killmacdonagh was supreme in the International a fortnight ago, finishing with one of the widest winning margins in the 53-year history of the race and going to within four spots of breaking the 550 record. She was only the seventh bitch to triumph in the race and the sixth to complete the Irish Oaks/International double.

And to think that the first winner of the race to be kennelled in Cork did it all after taking a bump at the opening corner with recently-crowned English Derby champion, Priceless Blake, alongside her. In addition to being the Oaks winner, the daughter of Zero Ten and Deercrest Lady has the Curraheen 550 record to her credit, and if she doesn’t go in season in the meantime, the BoyleSports Irish Derby in September will be her next objective.

A career at stud is next for Ardnasool Jet. This flying machine, dubbed the Donegal Dynamo, has been found to have an injury, and while it’s not known if, after treatment, he’ll be put back in training, he has already done enough to find a place among the game’s greatest sprinters.

Since his second major Dowdallshill triumph the Cathal McGhee-trained brindled has captivated Shelbourne Park crowds, lowering the 350 record on his way to yet another competition win.

While a sprinter is not most breeders’ preferred choice, bookings for Ardnasool’s services are likely to be plentiful. He had blinding pace, and was never left with ground to make up in his 20-plus races.

The Donegal runner would have been called home by either Michael Fortune or his son, Ian, in their roles as Shelbourne Park track commentators. Same with Killmacdonagh for her exploits at headquarters.

Sadly, Michael passed away on Monday last, his death at the age of 70 the cause of much sadness among the greyhound and newspaper fraternities. His first role was as a sports reporter with the Irish Press Group, covering greyhound and horse racing, coursing and GAA before graduating to becoming Sports Editor of the group’s daily paper.

In more recent years he was involved in RTÉ’s coverage of greyhound racing as well as being Editor of trade newspapers, and the publication of the Greyhound Review Annual.

He was a regular at Dundalk on August 15, covering the horses in the afternoon and then taking in the International. I remember him coming in for acclaim at one particular greyhound meeting many decades ago; earlier that day he had seen all of his selections for the Press trotting up at Dowdallshill’s grass track, some of them at very tasty prices. The Sports Editor of the day hadn’t much thinking to do to come up with a headline for the following day’s paper: “Fortune Favours The Punters.”We shared a slot at Dundalk Stadium a few times in recent years, reviewing the cards on the nights of the International and Sprint finals. I was there to provide local knowledge, Michael the expertise.

He was a man who was passionate about the greyhound game, and had he been in full health, it would have been odds-on him providing a robust repudiation to much of what was offered as concrete evidence on the recent RTÉ television programme. Sympathy is extended to his wife and family.

Sympathy also goes to Darver owner and trainer, Paul McDonnell on the recent death of his father, Brian. Like his son, Brian – or, Bruce, as he was best known to his friends – had a deep interest in greyhounds, having over the years turned out a few good ‘uns from his Mid-Louth kennel. Two names that come quickly to mind are On The Dallyon and Walterstown Miss.And the two boys, along with another of Brian’s sons, Seán, also shared a passion for Gaelic football.

Brian wore the Darver Volunteers colours, while it was with St. Joseph’s, who took over as Darver and Dromiskin parish representatives in the early 1960s, that the lads traded their wares, winning a senior championship in 1996.

Many connected with the local greyhound scene were present for Brian’s obsequies.