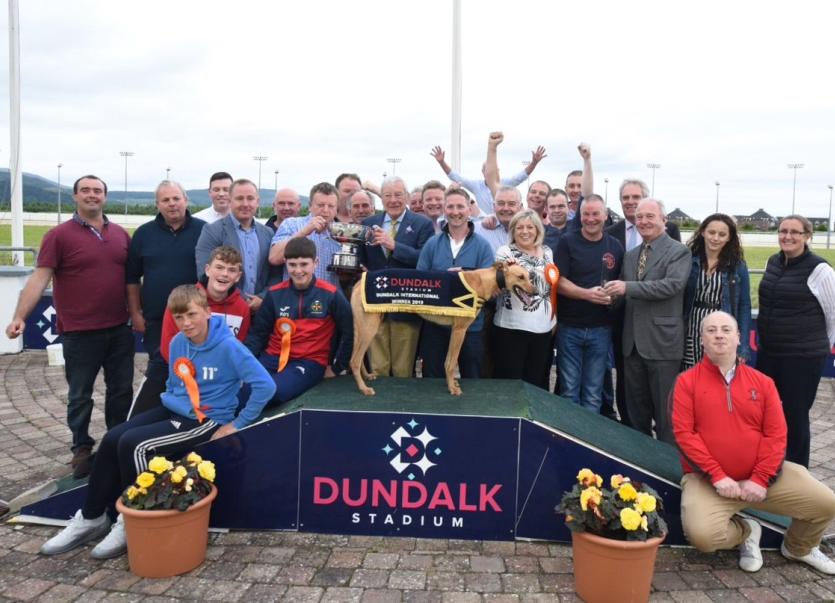 Killmacdonagh had not only to be fast but also brave to win the Dundalk International at Dowdallshill last Friday night. (Pic: Dundalk Stadium)

Killmacdonagh had not only to be fast but also brave to win the Dundalk International at Dowdallshill last Friday night. And the Cork runner was fast and very, very brave.

Quick to find a stride after leaving the five box, the recent Sporting Press Irish Oaks winner had English Derby scorer, Priceless Blake, on her inside at the opening corner, and looked to be in some danger.

But calling on every bit of courage and determination available to her, Killmacdonagh wasn’t for stopping. She took a tip from the one on the inside but never lost stride and turning into the back had a length to spare.

Opening up impressively, the daughter of Zero Ten and Deercrest Lady widened the gap between herself and her main challenger with every stride after that and turning for home had the race in safe keeping. She powered her way to the line, finishing with almost five lengths to spare on the always-second Priceless Blake. It was one of the most decisive wins in the 51-year history of the event.

The favourite, Ballymac Arminta, was slow to leave the traps, and was back among the tail-enders going down the back. The Kerry flyer, one of the fastest bitches to cover the 550 distances, made up some late ground to take third, a total of six lengths off the winner.  Skywalker Logan was fourth, followed by Gurteen Feather and Ballyanne Sim.

Killmacdonagh, owned by William Hennessy and trained by Kieran Lynch, both proud Corkmen, becomes the sixth bitch to complete the Irish Oaks/International double, all of them bringing  up the double in the one year.

The Newry-bred Main Avenue was the first in 1975, followed by the Ger McKenna-trained Nameless Pixie, four years later. The finish to the 1983 International, when five of the sextet crossed the line together, is still talked about; the winner, the Coalisland representative, Quick Suzy, was in Harold’s Cross  a matter of days later, adding the bitch Classic to her laurels.

Ruairi Dawns’ Borna Survivor followed her Shelbourne Park win by taking the last International to be run at The Ramparts, in 1999, and it was a decade later when the Matt O’Donnell-trained Skywalker Queen completed the two-timer at Dowdallshill.

Killmacdonagh must rate among the best-ever of her gender. She was superb in the Oaks final back at the beginning of last month, lowering  Ballymac Arminta’s colours in the process. Since then she has taken major honours at her home track, breaking the Curraheen 550 record two weeks on the trot.

Described by her trainer as “special”,  the flying fawn will now be aimed at the Boylesports Irish Derby, that’s if she doesn’t go in season in the meantime. And what a double that would be, bringing up a never-before achieved double.

Priceless Blake also has the Irish Derby as a target, but in the meantime, will, according to trainer Paul Hennessy, return to the scene of his recent triumph for a tilt at Nottingham’s  Select Stakes.

There were 11 races on last Friday night’s supporting card, seven of them finals of minor stakes. If the loudest cheer went up for Groveshill  Orla’s win in the LAN Consultants 525 it’s because this lassie had ‘local’ written all over her. She’s trained in Channonrock by Seamus Casey, who’s also joint-owner with Dowdallshill veteran, Arthur Boyle.

Now well into his ninth decade, Arthur has had a life-time in greyhounds; if circumstances permitted he’d still have a few out the back of the house. But in their absence he’s taking huge satisfaction from the performances of the Groveshills. There have been four winners in recent weeks, Orla’s latest the very best of them.

Running from six and accompanied to traps by her kennelmate, Groveshill Echo, the daughter of Kinlough Brae took charge at an early stage and was always travelling like a winner after that. She  finished just over a couple of lengths clear of Kieran Lonergan’s Castleblayney, Matilda Jane, clocking her best ever time for the distance.