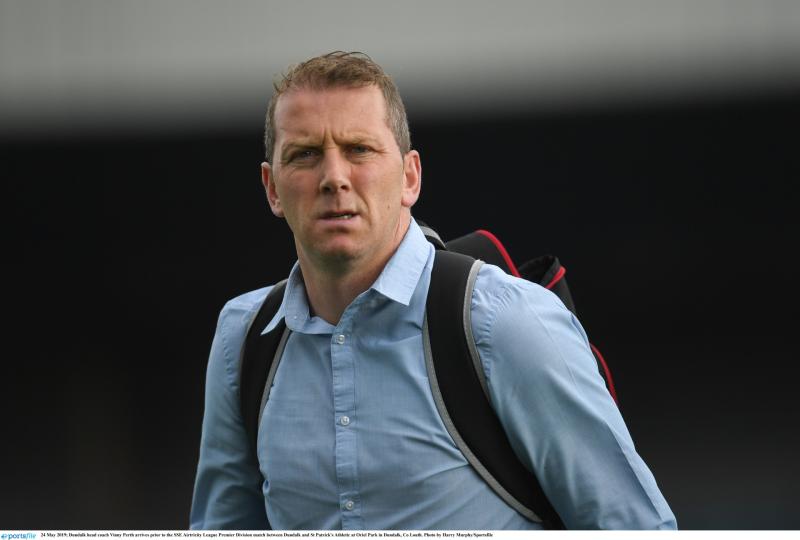 Dundalk hold the top spot in the top division, Vinny Perth’s men having worked up a head of steam after stumbling from traps. (Pic: Sportsfile)

So far, so good. No, make that very good, as Oriel Park regulars would see it.

The League of Ireland is about to go into recess and Dundalk hold the top spot in the top division, Vinny Perth’s men having worked up a head of steam after stumbling from traps.

This paper’s Keith Wallace said last week that Patrick Hoban is ‘goal-hungry’, and so he is. But Michael Duffy likes to get on the board as well, and now, having taken his leave of the treatment table, John Mountney is matching his wellbeing with some clinkers. The pony-tailed one’s recent hat-trick was his first at this league level.

Shamrock Rovers are a close-up second in the table with 21 matches played and 15 remaining; third-placed Bohemians are well back. Several of the rest have fourth place to aim at; but UCD and Finn Harps will find it near impossible to avoid a relegation scrap.

Still, there’s always the Cup for the whippers-in to go for, and as they strive for a place in the Aviva showpiece, the Students and Harps can look to England for inspiration.

Research for a recent a quiz, part of a Bellurgan United-organised weekend commemorating of one of this most progressive club’s players, Ciarán Casey, had your writer delving into the record books. They showed that Middlesborough reached the 1997 FA Cup final – beaten 2-0 by Chelsea – but having finished second last in the league were relegated. The same happened to Brighton in 1983 and to Leicester in ’69 and Man City back in the 1920s. None of them won the Cup, by the way.

Back to the quiz. It went to a tie-breaker, three questions for a representative of each of the dead-heating teams. Both got the first two right, Williams the team to sack Damon Hill the year he won the Formula One title and Nick Faldo the most recent Englishman to captain the European Ryder Cup team. But it was only Kevin who got the third one right.

Come on you soccerites - who did Arsene Wenger succeed when he took over as Arsenal manager?

No, not George Graham, but Bruce Rioch.

Bellurgan have another commemoration coming up on the last Saturday of this month. It’s in the name of another of their former players, the one known to this page as the ‘young man’. It will have golf in Ballymascanlon, penalties in the promoting club’s Tom Flynn Park, free-taking in St. Patricks’ Páirc Eamoin and greyhound racing at Dundalk Stadium.

More about the day later.