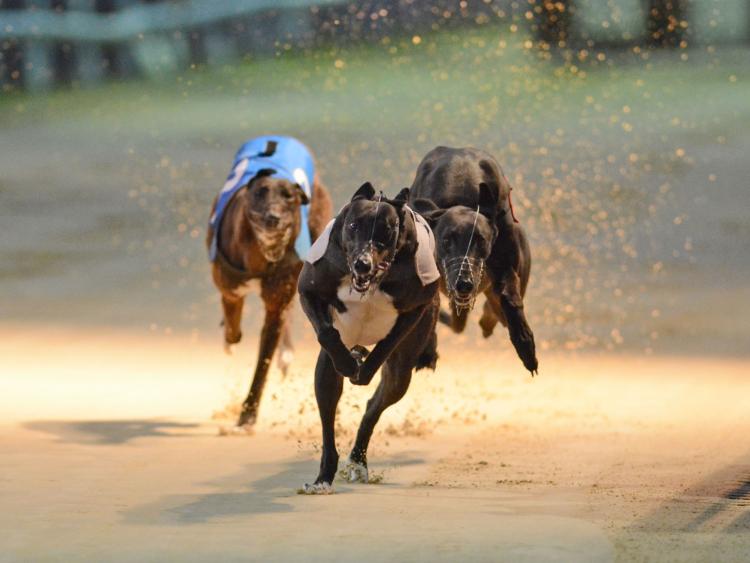 Effernogue Patsy and Rocket Ranger remain unbeaten in the May Novice Stake at Dundalk Stadium.

Effernogue Patsy and Rocket Ranger remain unbeaten in the May Novice Stake at Dundalk Stadium after last weekend’s quarter-finals. The first-named went fastest in the opening round, but this time it was Rocket Ranger’s turn to take top spot in the time test.

The Marina McKeown- trained runner came in with 28.92, getting the better of his market rival, Cree Astra. Effernogue Patsy had to overcome a first bend bump before going clear of Drumcrow Lincoln. The Antrim-owned dog clocked 29.05, which was back from his 28.85 first round run, understandable considering his first bend trouble.

The Ruddy kennel in Dungannon gained compensation for Drumcrow Lincoln’s defeat when Drumcrow Luna went well clear of her rivals to win by almost eight lengths in 29.01.

The opening round of the consolation stake cut up badly with only three going to traps for the first semi-final. This resulted in Bob Hund scoring an emphatic win for Michael Doyle’s Togher kennel, the Paradise Madison dog winning by seven lengths from Seamus Casey’s Channon Storm in 29.08.

The other qualifier had another big-margin winner in Millhill Cruise. The Tyrone runner was slowly away, but trouble up front at the opening bend put him back in the picture. A good finish won it for the son of Drumcrow William in 29.65.

In a week when his former work colleague, Peter Burke, was laid to rest, Knockbridge’s Gerry Callan saw his Knock Them Bandy score a photo-finish win in a 400. A winner back at the beginning of last month, Knock Them Bandy broke in front, and was still ahead of the pack turning in, but before making it over the line in front, the Callan runner had to withstand a late challenge from Whitertock Dan, winning by a head in a smart 21.56.

Peter Burke, from Clogherhead, who died after a lengthy battle with illness, was also involved in the greyhound game. Indeed, he presided over one of the north-east area’s most successful kennels, running most of his greyhounds, nearly all of them home-bred, under the Mulla prefix.

But it was two ‘outside’ runners that propelled Peter up the training ranks. Assisted by his wife Doreen and daughter Petra, he took on the best with Mams Bank and Dads Bank back in the first half of the 1980s.

Mams Bank had the form to win a place in the 1983 Carrolls International at his trainer’s local track on The Ramparts, and in one of the most dramatic runnings of the event, the Meath-owned bitch ran a blinder to be part of a five-way photo. After a lengthy delay, the print showed Mams Bank dead-heating for second, a head off the winner, Quick Suzy. Less than a length covered the first five home.

Dads Bank, also Meath-owned, won 11 of his first dozen races for the Burke kennel, and when his racing days were over, he enjoyed an outstanding career at stud, English Classic and Champion Stakes winners figuring among his progeny.

Many from the greyhound fraternity were present at Peter’s Requiem Mass and burial on Friday last. Sympathy is extended to his wife and family.