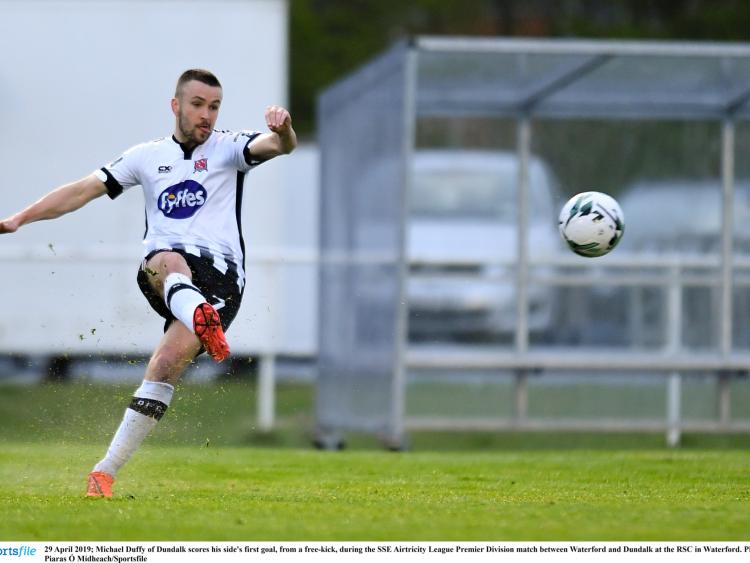 Michael Duffy struck gold and Jordan Flores dug further as Dundalk made it five straight wins to keep the heat on in the SSE Airtricity League Premier Division title race, with an impressive 3-0 success on a miserable Monday in Waterford.

The defending champions had stayed overnight, and it was a costly but valuable Sunday sojourn to the South East as they burst out of the blocks.

Waterford had put together a four-match unbeaten, albeit including three draws, and they were undefeated on home turf since the opening night of the season. However, they did not lay a glove on Dundalk here.

Vinny Perth’s side were in control from the first whistle and they deservedly took a lead into half-time after Duffy’s delightful free-kick evaded everyone to find the net.

Flores had been thrown into action in the early stages after an unfortunate injury to Jamie McGrath, but the Wigan-born midfielder showed his class with a wonderful 25-yard strike that flew beautifully into the top corner.

Waterford were well beaten, and their star man Bastien Héry’s frustration was evident with two quick-fire yellow cards to earn an early bath. Duffy then fired in a quality long-range third, as Dundalk issued another telling statement.

WATCH | Here's a look at that free kick by @michaelduffy_ to break the deadlock at the RSC. #WATDUN #CmonTheTown pic.twitter.com/NHVVVIZ151

Despite another quick turnaround in fixtures, Perth had named nine of the starting XI that blew leaders Shamrock Rovers away 72 hours earlier. The two changes were both in defence, with captain Brian Gartland and Dean Jarvis returning in place of Daniel Cleary and Dane Massey, the latter absent from the matchday 18.

Like the Lilywhites, Waterford were on a four-match unbeaten sequence. Boss Alan Reynolds had little room for manoeuvre and so stuck with the same side that earned a hard-fought point at in-form Bohemians on Friday night.

Dundalk started very brightly, owning the ball early on. Their first opening arrived on nine minutes when record goalscorer Patrick Hoban played Duffy through, but the winger was denied by a good Matthew Connor stop.

Perth’s plans were then disrupted when McGrath had to be carried off, with Flores entering on the quarter-hour. Midway through the half, Daniel Kelly almost paved the way for the breakthrough, but after his pass to Duffy, Connor was quick to smother the ball.

Waterford’s dangerous frontline were feeding off scraps and, from those, they almost feasted on 28 minutes. They won a header from a Connor kick-out, with Ismahil Akinade seizing possession and unleashing a 30-yard strike that for a moment had Gary Rogers worried as it flew off target.

That lifted the home support, and the Blues appeared to be gaining a foothold in the game. However, that would be as good as it got. By half-time, they were silenced.

Patrick McEleney drew a foul on the left angle of the area, and Duffy stepped up to curl a delightful free-kick to the far bottom corner. Hoban had looked set to connect with the delivery, which left Connor wrong-footed, as the Derry native scored for the third game running.

It could have been more before the break but Kelly was denied, much to the frustration of Perth. But it would ultimately matter little.

The second goal arrived in stunning fashion on 57 minutes, as Dundalk again threatened down the left through Duffy, with Hoban laying a pass into the path of Flores who let fly with a sweet, unstoppable rising shot from distance that rippled the net.

Héry then earned a yellow card for a poor tackle on Kelly, and he was soon shown red after a challenge on McEleney. Duffy made it 3-0 on 67 minutes with a fine finish, to well and truly signal a return to top form after struggling recently for full fitness.

That killed the game, and allowed Dundalk to give McEleney the final quarter off as they now prepare for another huge game against his hometown club Derry City at Oriel Park on Friday night (7:45pm).