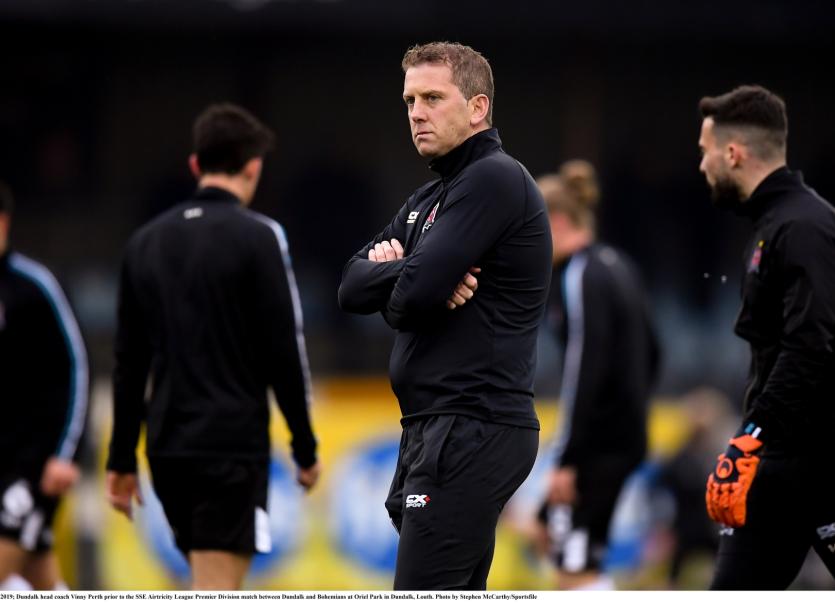 Dundalk FC head coach Vinny Perth says his players must be “right at it” and take nothing for granted against bottom-of-the-table Finn Harps, as they look to build momentum before league leaders Shamrock Rovers roll into town next week.

The defending champions stopped the rot with a lucky 1-0 win over Bohemians at Oriel Park on Monday night, as Patrick Hoban fired home a penalty in the fifth minute of injury-time.

Goalkeeper Gary Rogers had remarked after last Friday’s defeat in Sligo that Dundalk would “take a bad game and a win right now”, and that’s exactly what they got.

Perth stated post-match that he hopes it can be a turning point in a season which has so far not gone to plan. Injuries to some and lack of match practice for others have left the boss with constant headaches, ever since they kicked off their campaign in mid-February. Certain key players, he admits, are just not firing.

It must be noted that while Harps have lost eight league games in-a-row – including three heavy defeats on the road – UCD have won three of their last five. Those victories were all recorded at the UCD Bowl, with Cork City the latest to fall there on Monday.

Harps already look certain to return to the First Division. They have collected just two points from a possible 33, but one of those was against Dundalk in Donegal eight weeks ago.

That result will be on Perth’s mind, and he has called on some of his star players to raise their game in what is a crucial period for the club.

“At the moment, we’re not good enough or playing well enough to take anything for granted,” he said, looking ahead to Harps.

“We have got to be right at it, we’ve got to be so strong. People think Chris Shields and Patrick McEleney are back, but they’re not back. They need game-time. There are a few lads out of form. You can see Michael (Duffy) is just not at his level. He’s 7/10 or 6/10. Michael is a 10/10 player most weeks, so you can see he’s not at it.

“The one who is at it, in my opinion, is (Patrick) Hoban. I think Hoban has been outstanding. If we’re better around him, you’ll see him being better. We need that. You see (Jamie) McGrath, Duffy, (Daniel) Kelly, (John) Mountney on Monday are just 6/10s. We need them to go up to 8s.

“That will come. We will fix that on the training ground as they get fitter and as we get regular training sessions. But we’re just not there yet.”

Almost 2,800 watched as Dundalk struck a smash-and-grab win over Bohemians, and Perth praised the home support for getting behind him and his team.

“I thought the crowd were outstanding, but they have been for the last month,” he said. “I hope they understand what we’re going through. I can only praise the crowd and how they have been. There is a bit of moaning and groaning going on, but I actually expect that.

“I think it’s normal and I sort of embrace it. I don’t have a problem with it, and if they want to moan and groan, it’s up to us to give them nothing to moan about.”

Dundalk’s home form has been perfect, since the opening-day draw against Sligo Rovers, with four straight wins – the last three accompanied by clean-sheets. The head coach hopes they can continue that form in front of a passionate support.

“Someone said we’re not that good away from home,” Perth noted. “But winning away in Derry was a massive result for us. We should have won up in Rovers – we should have got a penalty like Monday, in the 90th minute. They are big decisions that change perceptions.

“But at the same time, we have got to dig in. We have got a home game again here on Friday. We need a big crowd to support us. If they do and they do what they done on Monday, we’ll pick up another three points. You get the same three points for beating Finn Harps as you do for beating Cork at home.”

Midfielder Robbie Benson and centre-half Stephen Folan are continuing their recoveries. Chris Shields and Patrick McEleney may not be fit to start on Friday, and there has been no indication on the condition of Seán Murray, who was forced to sit out on Monday.