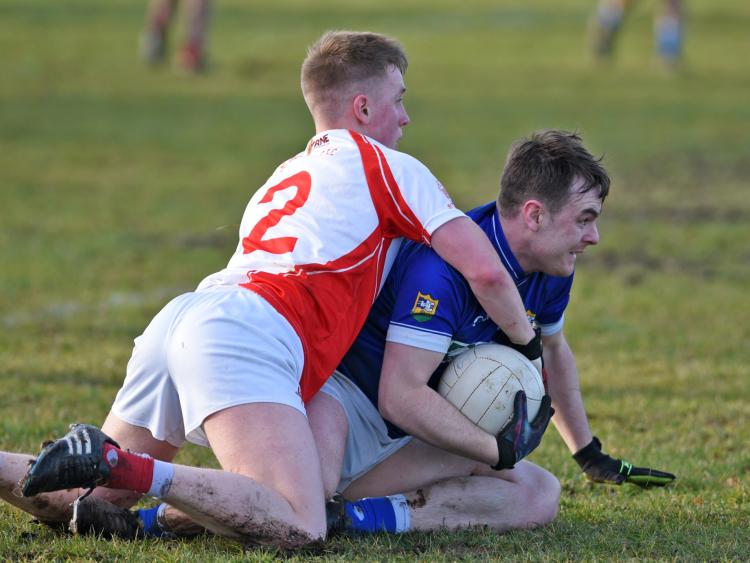 Ronan Bailey was on the St. Bride's team that earned a draw with Newtown Blues on Sunday. (Pic: Ciarán Culligan)

St. Bride’s had to rely on a last-gasp free-kick from Conaill Devin to salvage a draw in this closely contested match at Páirc an Chuinnigh on Sunday afternoon.

The Newfoundwell men were the quickest out of the blocks and raced into a four-point lead with the scores coming from Colm Judge, Ciarán Downey and a brace from Robert Carr, before Conaill Devin got his side off the mark on 13 minutes.

The visitors notched up a further three unanswered points from Fergal Donoghue, Dáire Nally and Carr again and were well in control of proceedings with half-time quickly approaching.

The hosts replied with a late point from Seán Brennan and a fisted goal from full-forward, Enda Murphy, on the stroke of half-time to leave only two points between the sides at the interval.

After the restart Blues extended their lead by three more points from Carr (2) and full-back Emmet Carolan. It was looking good for the visitors at that stage, but St. Bride’s found their shooting boots and enjoyed a purple patch with five unanswered points of their own from Seán Marry (2), Devin (2) and Brennan to leave it all square with 10 minutes remaining.

It could have been worse for Newtown Blues as they had to rely on two point-blank saves from their custodian, Dean Martin.

The match was on a knife edge for the final ten minutes, but Ciarán Downey appeared to have won it for the visitors when his free-kick was pointed right at the end of normal time.

However, there was still one more attack from the Reds which resulted in a pointed free-kick from Devin to level the game.