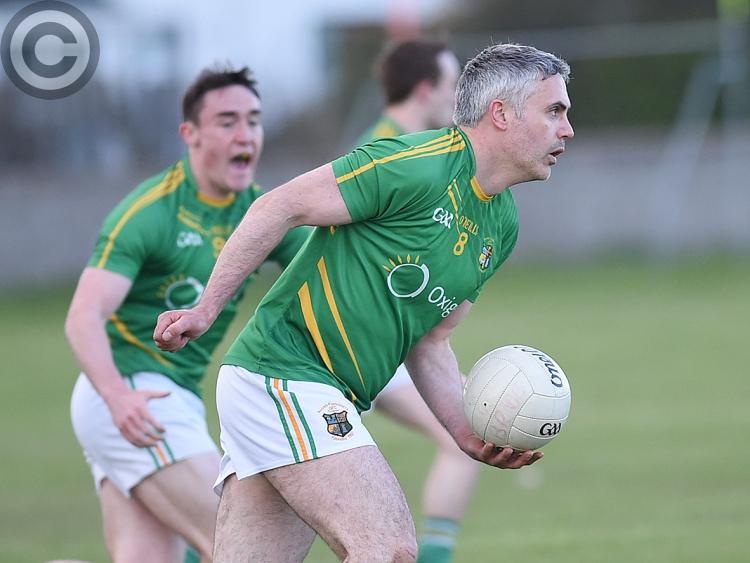 Naomh Fionnbarra had John Doyle at midfield in their win over Dundalk Gaels at the weekend. (Pic: Arthur Kinahan)

Naomh Fionnbarra held off a brave fightback from Dundalk Gaels before returning home from Dundalk with victory in this Division Two clash.

The Ballygassan side laid the foundations for the win with an impressive first half display that saw them hit the net three times on their way to an eight-point lead.

The Finbarrs started brightly and Jack Butterly had the ball in the back of the net after two minutes, but William Woods then hit the post with a goal effort before nailing a free. Led by Derek Crilly, Gaels hit back to move a point ahead, but the Barrs regained the lead when Pádraic Murphy reacted quickest when the ball came back off the upright before lobbing the keeper.

The Barrs were in full flow at this stage and saw Woods denied from the penalty spot before he made amends with his side’s third goal as they went in at the break leading by 3-4 to 0-5.

The Dundalk men started the second half with two pointed frees, but scores from Woods and Conor Obsorne helped keep the Finbarrs in control.

A goal from sub Mark Hanna in the closing 10 minutes gave his side hope as they got back to within a point, but a late score from Osborne ensured the Togher men held out for their first win over the Dundalk men since 2006.