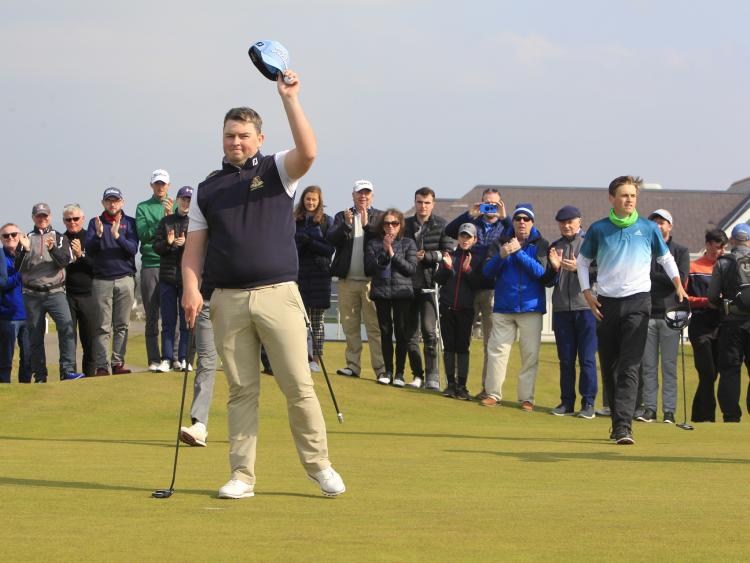 Dundalk’s Caolan Rafferty refused to allow a stellar chasing pack to get in the way of his charge to victory on Sunday, as he signed off with a one-over par 72 to win the first ever stroke play staging of the West of Ireland Championship by four shots at Rosses Point, and take an early lead in the Bridgestone Order of Merit race.

The 26-year old entered the final round with a commanding four-shot lead, but didn’t have to look too far for threats with current Australian Amateur Champion and world number 26 Conor Purcell alongside him in the final three-ball, though five shots back.

Chelmsford’s Arron Edwards-Hill was the third member of the group and a shot closer to Rafferty, but perhaps it’s unsurprising that there was a sense among those in attendance in sun-kissed County Sligo that the biggest danger to Rafferty would be himself.

No stranger to winning, the reigning South of Ireland champion had only entered the final round of the R&A Scholars championship at St. Andrews on Tuesday with an even stronger five stroke lead, only to let the advantage slip at the home of golf. Determined not to falter from the front this time around, however, Rafferty epitomised cool as he navigated his way around the treacherous track in pristine playing conditions on Sunday.

“Having a four-shot lead, I was joking with my father last night, ‘awh, here we go again’,” reflected a visibly delighted Rafferty.

“But golf’s golf; you can have a five shot lead or a ten shot lead but you never know what the next day’s going to bring. I might have got a wee bit upset about it on the golf course over there but once I had finished, I rang the girlfriend, rang my father and got on with it. I’ve had plenty of bad days in my career and that wasn’t going to be the worst day.”

Instead, Rafferty looked more determined than ever to find the finish line and any hopes the chasers had of a false start from the leader soon diminished with a reassuring birdie at the par-five fifth, Rafferty safely through his first six holes in one-under par.

“I knew when I birdied the fifth, I was 10-under then and if I could keep it around level par the lads would have to shoot a really good score to beat me. This golf course doesn’t throw out too many birdies. We played really good golf over the last few days to get to the score we were on and I knew if I could hold it together, I should get the job done.”

Yet it was never going to be all plain sailing and with Rafferty bogeying seven, Purcell made the turn one shot better in 35 before chipping in for birdie on 10 and two-putting for another gain on the par-five 12th. When Rafferty bogeyed 14, Purcell had a short but testing four-footer on the same hole for par to reduce the gap to just one. It was a putt that slid agonisingly past the hole and it seemed to give Rafferty the lift he needed.

From there, the bubbly Dundalk player parred home, restoring his four-shot cushion for an eight-under par winning total. Having contemplated giving the event a miss prior to the tournament, he cut a relived figure atop the 18th green at Rosses Point after claiming one of Ireland’s oldest crowns in a stroke play format that proved vital to Rafferty’s win.

“I was humming and hawing whether I should even come over or not given my college work load but funnily enough, I actually have a great stroke play record from the qualifiers around here. I sat down and looked at my scores and thought, well I’m actually not too bad at stroke play around this golf course and to have four rounds of strokes could actually play to my advantage. Luckily enough it did because I’ve a lot of college work to catch up on now!”