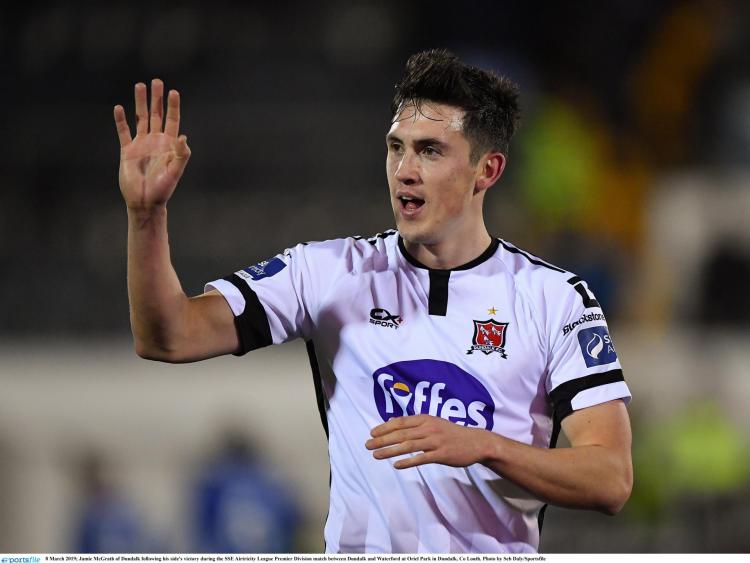 'Jamie McGrath has arguably been Dundalk FC’s best performer this year and the exciting young midfielder is hoping that things can only get better'. (Pic: Sportsfile)

Jamie McGrath has arguably been Dundalk FC’s best performer this year and the exciting young midfielder is hoping that things can only get better, having already stepped up a level on his award-winning 2018.

Last November, McGrath was named the PFAI Young Player of the Year after helping Dundalk to the league and FAI Cup double in just his second season at the club.

Now, he’s even better. The 22-year-old’s form has been remarkable given that he missed all of pre-season as well as the opening two league games with a groin injury. When he did appear, his impact was immediate as he was key in the team’s first win, after coming off the bench at home to UCD.

That was only five weeks ago, but he has shown impressive levels of fitness. He has slotted in seamlessly to nail down his place in the starting XI, and in what is the most competitive squad in the country, it is difficult to see him being displaced.

His piece of magic created the match-winning moment against old rivals Cork City at Oriel Park last Friday. Yet he is still not at 100 percent.

“I picked up a small bit of a knock in the second half; just on my hip, it’s nothing major,” Jamie revealed, asked where his fitness is at. “But I felt good – in the second half I probably didn’t move as much as I’d like to. I feel like I’m getting there now.

“Hopefully, I can kick on from last year. Last season was much better than my first year here. Hopefully, that can just keep continuing, I can do my best for the team and the performances get better.”

McGrath’s introduction to the League of Ireland came with St. Patrick’s Athletic, where he made his Premier Division debut aged 18 in 2014. This Friday, he returns to his old stomping ground, intent on inflicting further misery on an out-of-sorts Saints.

His former side have lost three on the trot, but the Athboy native is taking nothing for granted.

“They have quality right throughout the team,” he noted. “They have strengthened with Harry (Kenny) coming in. They have a really good squad – it’s not going to be easy at all.

“They started off very well. There was a really good buzz around the place up there. I spent a few years there and when things are going well, it’s a great place to play football. I’m looking forward to going there. It’s a great pitch to play on; hopefully, we can pass the ball well on it and come out with the win.”

Shamrock Rovers are currently seven points clear at the summit thanks to having played two games more than Dundalk. But McGrath dismissed table talk.

He said: “Rovers have played extra matches so we’re not going to get worked up on that. They have Cork next weekend as well. We just have to focus on ourselves. We had the same start last year and it worked out okay. There is no need to panic – it’s still very early days.