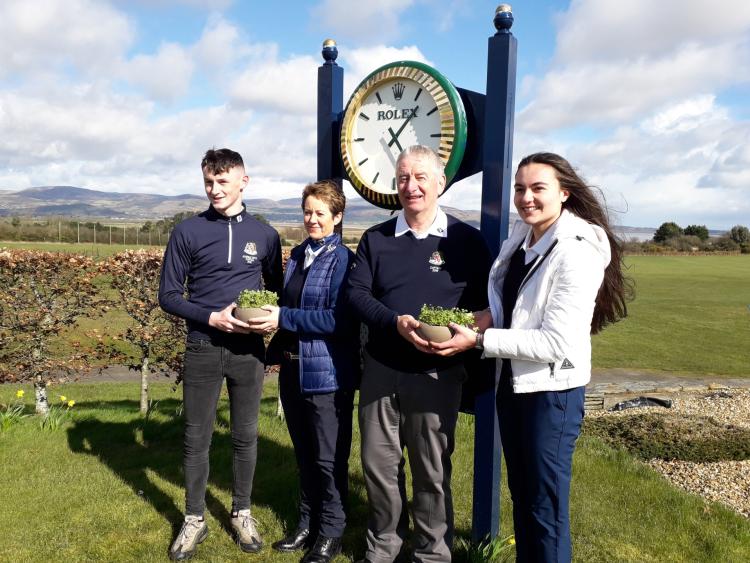 St. Patrick’s Day was celebrated on Sunday with a four man team competition over 14 holes in the morning following by a nine hole scotch foursomes event down the front and back nines in the afternoon.

The team competition, which was part of the Winter Series sponsored by Tiernan’s Centra Blackrock, saw 21 teams battle it out in testing conditions which featured wind, rain and sunshine as the four seasons made regular appearances across the morning.

Another nine points followed at the 17th and 18th and two bogeys at the first earned another four points to leave them on 17pts after four holes and a little off the pace for a team competition with two to score at each hole.

However, they got themselves right on track at the index one fourth when Hession and Cheshire both birdied the difficult par four for an impressive return of eight points.

Those were the team’s first two birdies of the round and they went on to add another four through Traynor at the par three fifth and Hession at the par five seventh, par four eighth and par five 12th.

Their scoring was extremely consistent and, in addition to that eight point return at the fourth, they scored seven points at the sixth and never managed lower than four points at any hole as they also reeled off one six pointer, five five pointers, and six four pointers for an overall total of 70pts.

That gave then a one point win over Neal MacKell (2), Noel Reidy (12), Dermot McKenna (16) and Gerry McDermott (16) who finished on 69pts having started on the first hole.

They too were very consistent with six six pointers, three five pointers and three four pointers but will regret three point returns at the par five sixth and par five 12th where the various water hazards drowned their hopes of victory.

The afternoon scotch foursomes competitions sponsored by Kilbeggan Distillery saw Tommy Reneghan (14) and Briege Renaghan (24) win the Front Nine prize while the Back Nine was won by Brid Rocks (19) and Eddie Rocks (9).

Entries for the Gents Mixed Foursomes and Scratch matchplay events can be made in the Bar. Entry fee is €5 per player, per event and the closing date for entries is April 1.