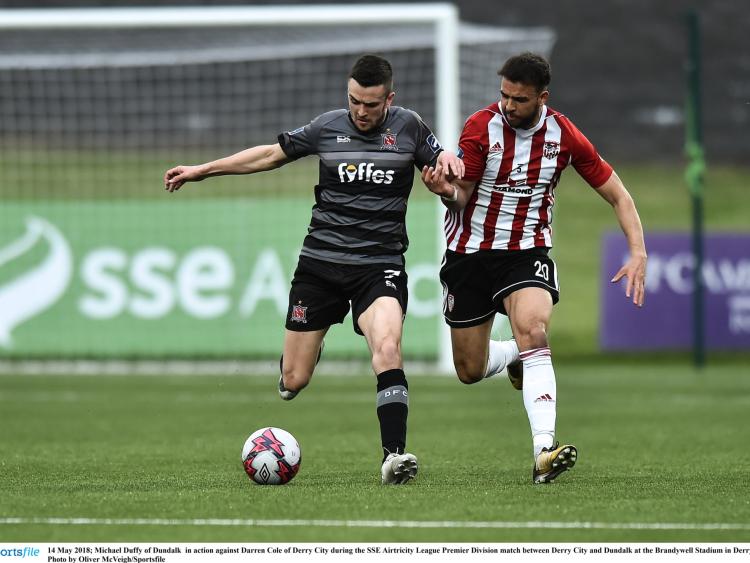 Dundalk FC's Michael Duffy and Darren Cole of Derry City in action during last May's meeting of the teams at the Brandywell Stadium. (Pic: Oliver McVeigh/Sportsfile)

Dundalk FC are faced with a different animal, says head coach Vinny Perth, as the champions prepare to face a Derry City side who have “got their identity back” under returning boss Declan Devine.

Devine led his hometown club to the FAI Cup in 2012, and his second coming as manager this year has started impressively. They boast a 100% record at the newly-named Ryan McBride Brandywell Stadium, while they have earned solid points on the road at Cork City and Bohemians.

Incredibly, Dundalk have lost just one of the last 18 Premier Division meetings between these two. That sole defeat, in March 2017, was a night when McBride scored his final goal for Derry before his tragic passing.

Derry’s record in this fixture speaks volumes. Following the departure of Kenny Shiels, Devine has been tasked with turning the club’s fortunes around, and to do so, he has had to build a completely new squad. He signed well, with former Dundalk favourite Peter Cherrie among his acquisitions, and they have hit the ground running.

Ahead of Friday’s clash, Perth said: “Declan is someone I have a lot of time for. He’s a student of Stephen Kenny, no different than myself. He seems to have really got that club going again. They have got their identity back. It’s going to be a tough game for us, we’re  looking forward to going there. The council has built a brilliant stadium for Derry.”

The Dundalk camp are well aware of the task facing them in the North.

“Declan is a Derry man and he did a terrific job up there before. Derry are always difficult opponents. It’s going to be a tough game, but we are well used to the astro, so it shouldn’t be a problem. Hopefully, we go up there, play well and get a good result.”

The Lilywhites will again be without several influential figures, with Chris Shields, Patrick McEleney, Robbie Benson and John Mountney still on the sidelines. Perth would not be drawn on the extent of Michael Duffy’s groin injury, but he looks set to miss a return to his hometown this weekend.

But the strength of the squad is the key to Dundalk’s success, says hitman Patrick Hoban. “We have a lot of bodies out, but it’s a squad game and it’s a team effort. It’s the same as last year – it was a team effort to win the league, and it will be the same this year. We have to make sure that we stick together.”

As he chases his first goal on the road this season, Hoban added: “Derry are a different outfit now. They’re playing well, they’re doing well at home, so we have to make sure we’re on it.”