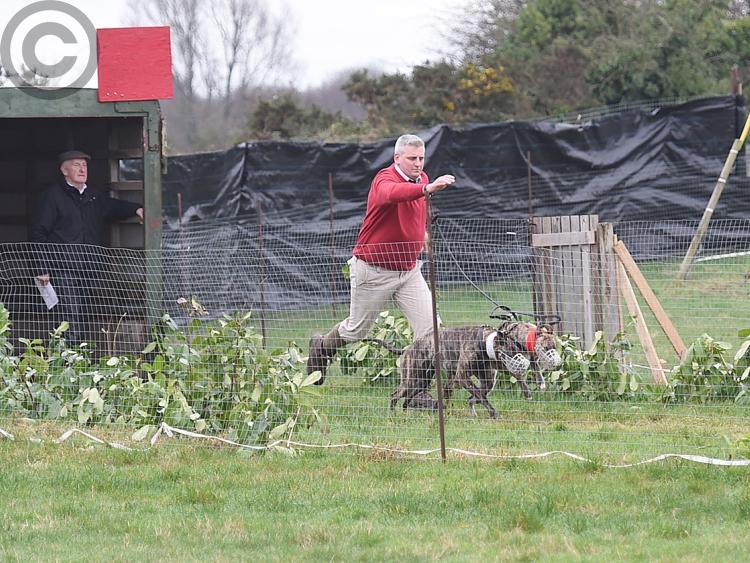 David Hoey would have faced up to Niall O’Donnell quite often in his Gaelic football days wearing the St. Bride’s colours. O’Donnell played in goals for Clan na Gael, and the probability is the big man came out on top most often in meetings of the two sides. By coincidence, both were known to their colleagues as ‘Smiler’.

It’s been the opposite, however, on the coursing field. Both are avid followers of the leash, playing their part as owners as well as committeemen. Twice in the last two renewals of the Dundalk & Dowdallshill Club’s annual get-together the lads have seen their charges clash in a final, and on each occasion the longtail housed at Hoey’s Knockbridge kennel has triumphed.

The latest set-to came at the local club’s meeting last week, and represented by Mystic Ann Marie – running in the name of his son, Conor – Hoey brought home the famed Macardle Cup once again, his home-bred, a winner of several races on the track, successful in the Johnny Heeney Workers’ Stake.

The final, in which O’Donnell had Belfry Flyer running for him, was a thriller, the most exciting of the ten run at a meeting in which the Dundalk & Dowdallshill Clun joined forces with Balbriggan to run a three-day meeting. The minimum divided the pair where it mattered after they’d gone head to head from the second the Slipper released them. Twelve months ago the same stake had a similar outcome, the Hoey kennel’s Ah Be Happy getting the better of Brain Freeze.

This wasn’t the only reverse suffered by the O’Donnells. They had She’s Ours going for them in the Oaks Trial Stake, and this daughter of Adios Alonso and Laytown Girl did well to reach the semi-finals. It was at this stage that she clashed with her litter-sister, Aubrieta, and was moving sweetly until going unsighted nearing the turn. This allowed the Castleblayney-based Aubrieta to nip in for the winning points.

This victory wasn’t a sign of better to come for Kieran Lonergan’s runner. In the decider she had to concede to Ironhill Lady, the Lifford challenger who has as one of her kennelmates, Ardnasool Lad, the winner of the Irish Sprint Cup at Dundalk Stadium back in August and a number of other top-class short distance races at Shelbourne Park who must be long odds-on for the 2018 sprinter of the year award.

Last week’s feature event, the Corn Cuchullain, was won by Darling Daughter, owned, trained and bred by Bessbrook’s Paddy Burns. This famed trophy has had a resting place in many other areas in the north-east, most often in the kennels of Jack Mullan and Brendan Matthews. But this is a first for Bessbrook, and by far the biggest prize Paddy Burns has won.

Darling Daughter’s win was the first in the Corn for a bitch since Fingal Gosling succeeded in 2005 and only the third in the 70-year history of the event. She was among the outsiders in the betting, getting a 12/1 quote before coursing; and was still an outsider with just two remaining. Her win in the decider was never in doubt, however - but it may be that her opponent, Meenagh Master, was carrying an injury.

Indeed, there were a number of injuries over the three days, the result of the going being on the firm side. This, plus a surfeit of courses being decided without a turn did nothing to embellish what was a significant occasion, the first in which two clubs from the area came together to make a joint presentation.

Darling Daughter had a prize to her name even before the Corn Cuchullain final was decided. As the last surviving bitch in the 16-runner stake, she put her name on the Paddy Carroll trophy, which commemorates a former Dundalk & Dowdallshill Club secretary and for many years a member of the Irish Coursing Club executive.

The Farrelly kennel in Ratharney, Co. Westmeath, which has enjoyed considerable success at the venue in recent times, was on the mark again, Scuba Steve winning the Derby Trial Stake.  The home-bred won from the Co. Cork-based, Co. Down-owned Donard Star in the final.