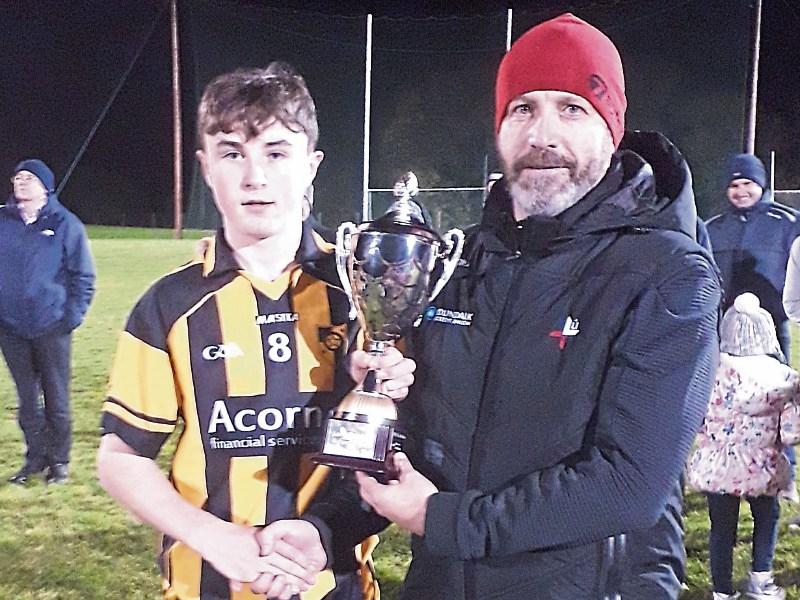 The young U14 hurlers of Naomh Moninne completed a clean sweep of all the Louth U14 hurling titles when capturing the League title with this hard earned victory over the St Kevin’s/Mattock/Glen Emmets combination in the final played in Darver last Wednesday night.

The Dundalk boys had the better of the early exchanges and thanks to a 12th minute goal from Seamus Reid they led at that stage by 1-2 to no score. The combination side responded with three successive points from Robert Mathews (2) and Cameron Maher.

A second goal from midfielder Fionn Cumiskey on the stroke of half time had Moninne leading by 2-2 to 0-3 at the break.

A pointed free from Sam Phelan extended the black and amber outfits lead on the resumption before their opponents got right back into it with a good goal from Cameron Maher.

Further scores from the pair of Phelan and Cumiskey which included a second third goal on 38 minutes had Moninne comfortably in front by 3-9 to 1-3.

To their credit the combination side fought gamely to the end and were rewarded with late goals from Maher and Mathews but it was Moninne that had done enough to hold out for the victory.

Afterwards the cup from presented to the Naomh Moninne captain Fionn Cumiskey by the Coiste Iomana Chairman Ken Tobin.