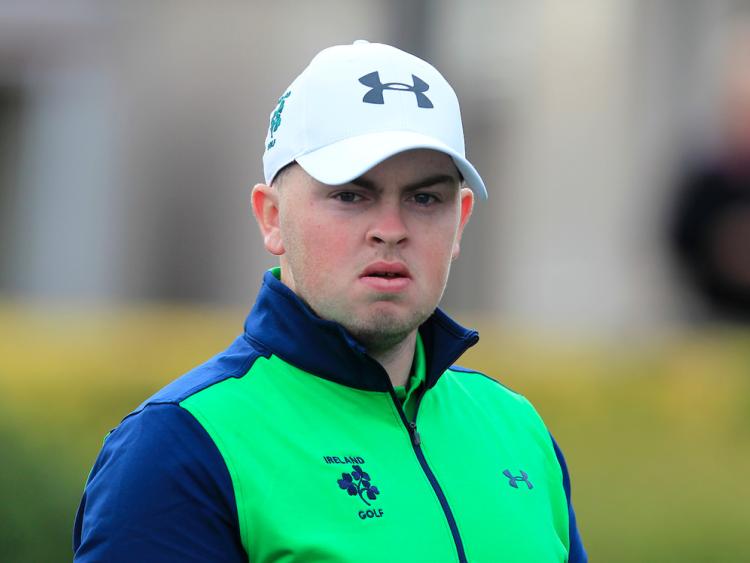 Caolan Rafferty produced a fantastic performance in the wind and rain in Scotland last week to win the 14th Fife Tournament on the British Universities & Colleges Tour.

The Dundalk player, who is a Harrington Scholar at Maynooth University, shot a six under par total of 136 to win the 36 hole event at Fairmont, St Andrews, by seven shots. His victory saw him move up to 54 in the world amateur golf rankings, his highest position yet.

The opening day of the competition, which attracted college golfers from all over Britain and Ireland, was characterised by shocking weather which included strong gusting winds followed by heavy that nearly made the course unplayable.

While most golfers struggled in the conditions, Rafferty revelled in them as he showed a high level of skill and patience in carding a one under par round of 70 that included three birdies and 13 pars after he started his round battling the high winds and finished it in a monsoon.

Conditions improved on the second day and Rafferty, who held a one shot lead overnight, quickly stamped his authority on proceedings with three consecutive birdies from the third to move to four under.

Stirling University's Laird Shepherd emerged from the chasing pack as five birdies over the front nine saw him reduce Rafferty’s lead to two shots but the Dundalk man put his foot on accelerator down the back nine with birdies on 10 and 11. Although he dropped a shot on the 12th Rafferty holed his sixth birdie of the day on the 14th and finished with a five under par 66 for a two round total of six under. He won by seven shots from Maynooth teammate Eanna Griffin with Laird in third.

Rafferty was the only player in the field to finish under par and he led Maynooth University to victory in the team event as they beat Durham University by a massive 23 strokes with Stirling a further two strokes back.

The tournament brought Rafferty’s 2019 season to an end and he can look back on very successful campaign which saw him make a major breakthrough by winning the South of Ireland Championship and getting into the top 100 in the World Golf Rankings as well as helping Dundalk to its first ever senior title when winning the Leinster Barton Shield at Mount Wolseley in July.