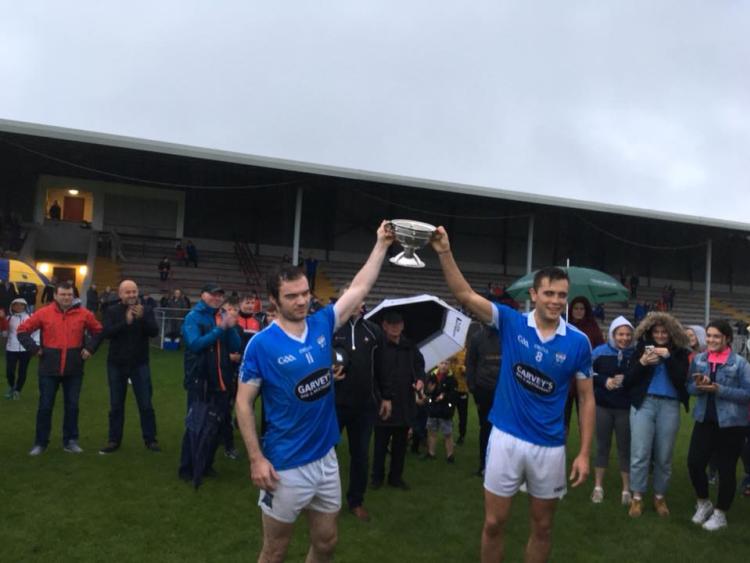 Their third win over the Jocks this year, Blues were comprehensive victors, despite falling well below their clinical best and wallowing through the motions for the majority of the second period.

Jim Farrell’s men were the better side for large portions of a stop-start first half, in which referee David Fedigan had plenty to deal with; but Blues took a grip shortly before the break and it was a hold they never looked like losing.

Máirtín’s midfielder Wayne Campbell was dismissed for a second yellow card on 21 minutes and from the resultant play ‘keeper Craig Lynch was beaten to Ciarán Downey’s dropping ball by Conor Moore’s fist. Having led 1-1 to 0-2 after seven minutes - Sam Mulroy winning and finding the net from a penalty - the Jocks went to the dressing room five down after Downey and Conor Branagan points followed Moore’s major. They really were weighty blows.

The Monasterboice men went just shy of a half-hour without a score, until Mulroy opened his account from play not long after the restart, and such a lean spell was never going to lend itself to turning over Blues, who had won 13 from 14 league and championship matches this year.

Again, they had plenty of the second half and Blues were not without their problems in trying to repel the holders’ advances, having had John Kermode and Fergal Donohoe ushered off for black and red cards respectively, the latter’s coming in bizarre circumstances. Having flattened a Máirtín’s runner, a caution looked to be the due course of action, though, assumedly for something Donohoe muttered or did in the aftermath, Hunterstown whistler Fedigan issued the ultimate punishment.

The Jocks will reflect ruefully upon their inability to convert two glorious goal opportunities when on top in the second half, especially given they fell to marksmen in Stephen Campbell and JP Rooney. However, Blues ‘keeper Dean Martin was in inspired form, saving with his body twice, and he must surely fall into the Man of the Match category, especially as none of the outfielders sufficiently distinguished themselves.

In contrast, Ross Nally gave Lynch no chance with a cracking drive which found the top corner of the net. Early in the second half, the goal doubled Blues’ lead and at 2-6 to 1-3, the outcome was all but confirmed.

Mulroy kept the underdogs’ hopes alive, but on every occasion they threatened to draw within touch, Blues knocked them back with Robert Carr, Andy McDonnell and Colm Judge among those to register late minors.

The teams are in championship action next weekend and provided they avoid each other en route, a repeat pairing in October’s showpiece cannot be ruled out.