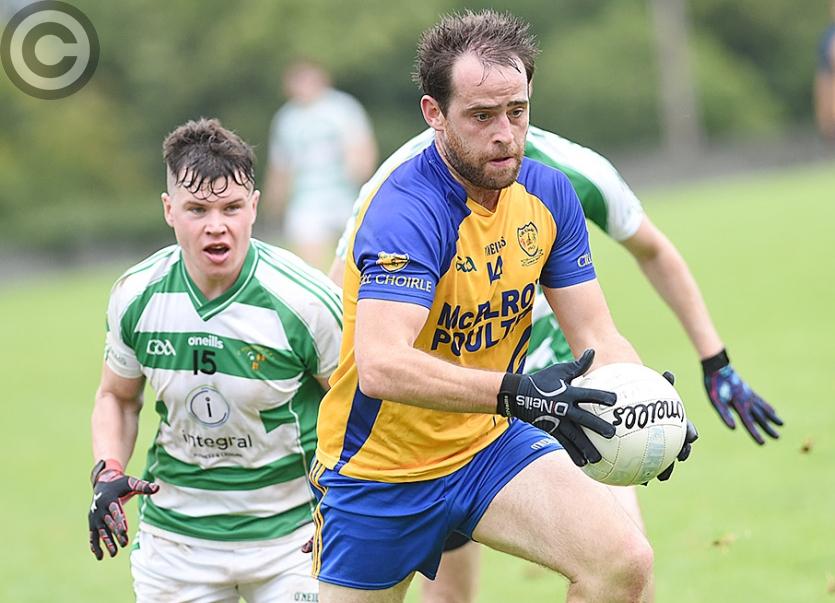 Kilkerley Emmets' Shane Lennon makes for the goals against O'Raghallaigh's at The Grove on Sunday. (Pic: Arthur Kinahan)

A late fisted point from Ben Rogan ensured that O’Raghallaigh’s will be playing in the Senior Championship next year as the Drogheda men came out on top after extra-time against Kilkerley Emmets at The Grove on Sunday.

The north-Louth side got off to a flying start and a goal from James Fegan saw them take the early advantage before points from Daniel McKeown, Shane Lennon and Tadhg McEnaney helped them take a 1-6 to no-score lead after just 10 minutes.

Daniel Morgan got O’Raghallaigh’s off the mark and that was the start of an amazing revival as points from Rúairí Moore and Barry Flanagan along with an Olan Walsh goal had the gap down to 1-9 to 1-6 at half-time.

O’Raghallaigh’s got back level after nine minutes of the second half and it was point-for-point for much of the remainder of the game before a Lennon score sent the game into extra-time.

Once again there was little between the teams, but scores from Joe Flanagan and Eoin Moore helped the Hoops lead, 1-20 to 1-17, at half-time.

Kilkerley fought back to level through a Lennon effort, but Rogan had the final say as he claimed a late winner.