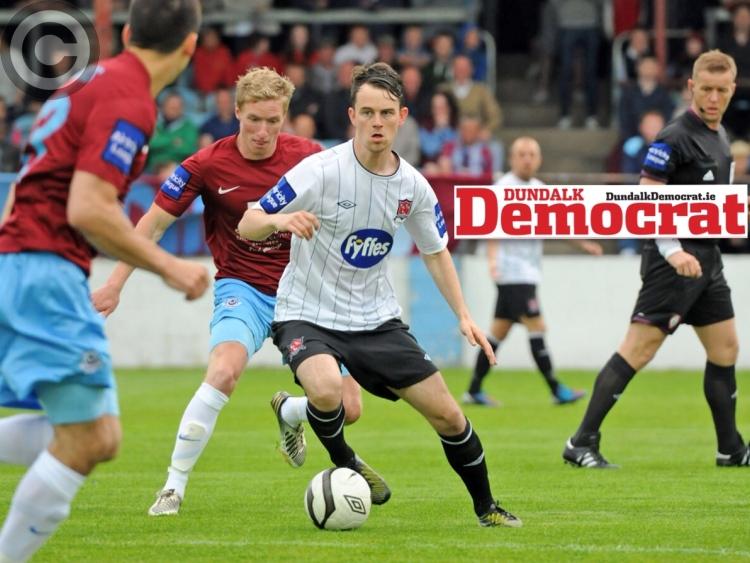 John Dillon in action for Dundalk FC during a 2013 Louth derby meeting with Drogheda at United Park. (Pic: Ciarán Culligan)

In years to come, long after the trophy-laden Stephen Kenny era at Dundalk FC has come to an end, there will be a quiz question, and it could stump quite a few. Who scored the club’s first league goal under the Dubliner?, it may be asked.

The answer: Liverpudlian midfielder, John Dillon. Against: Shelbourne, in week two of the new season.

First up in 2013 was tomorrow night's opponents, Shamrock Rovers, at home. Coincidental, perhaps, considering Kenny endured a disappointing eight-month spell in Tallaght the previous campaign. They drew scoreless; nonetheless, it was enough for Dillon to survey and say “we’ve a good team here”.

And they had, following the opener up with two wins over Shels in a week, the latter a 3-1, come-from-behind victory at Tolka in which Dillon equalised from a penalty.

“Stephen O’Donnell said to the lad who had the ball, I think it was Richie (Towell), ‘give him the ball. He’s confident, he’s going to score’. I remember putting the ball on the spot and thinking, ‘I’m putting this straight down the middle’.

“We went on the win the game. I don’t think the club has ever looked back since then… It’s kept going.”

Dillon was one of Kenny’s first signings, joining after helping the Bit O’Red to the 2012 Premier Division title.

He met the Dundalk manager at a hotel in Sligo, unsure of what exactly to expect despite close friend Jason McGuinness, who had worked with Kenny previously, advising of his infectiousness.

And it was that livewire attitude which proved luring for Dillon, who remains in touch with his former boss to this day.

“As a guy, I can’t speak highly enough of him. He’s so passionate, and that is his biggest strength for me, his passion for being successful was brilliant.

“I met him in a hotel in Sligo, he drove all the way down and you could see that he wanted to start the next day. You could see the disappointment of what happened at Rovers, but at the same time he couldn’t wait to get going again.

“The passion you could see in his face, he was convinced Dundalk could have success. Maybe not in the Europa League, but he was havin’ a go. He wasn’t going there to be in the middle of the league.

His penalty conversion at Shels was a prelude of things to come as Dillon would make the net bulge five times in 29 appearances over his sole season.

Admittedly, his form wasn’t as strong in the second half of that campaign, by which point he had moved to Dublin, due to his wife’s work commitments, with the ultimate intention of going home to England at the end of the year.

But it was something Kenny understood - evidence of his man-management skills which Dillon believes has rubbed off on Patrick Hoban, for one, since his return from the English lower leagues.

Then came a story…

“Talking about being passionate, I’ll always remember playing Derry at home and he read out a poem which related to us as a football team. It gave you goosebumps and we went out and it was like ‘here we go’. We won quite convincingly.

“It was little things like that, I think he understands when to go into certain games and take the pressure off. That’s the comparison I can give to him with Paul Cook.

“Man-management, he couldn’t have gone on for this long and had so much success without his brilliant man-management. I enjoyed it massively with him.”

Dillon’s departure was unluckily timed, some may say, as the next three league titles went Dundalk’s way and he would most likely have been part of at least one of them.

Still, he remained in football on his return to the UK, playing non-league in England with Southport before spending a couple of seasons in Wales.

“Because I’d moved home, I wanted them to win, more so for Stephen because I’d seen that first day how much it meant for him to be a success after what had happened at Rovers. He’s deserved it, he’s a top guy and I genuinely couldn’t speak highly enough of him and that’s why I still keep in touch.”

Dillon’s current job, as opposition analyst and head of recruitment at Crewe Alexandra, keeps him at the coalface, having retired as a player despite his moderate age, 30.

“I’d never change the four years I had in Ireland, not in a million years,” he says. Thus, he watches out for the results of both Sligo and Dundalk on a weekly basis.

His final match against Rovers yielded a 3-1 win in August 2013. Let’s hope history repeats itself…