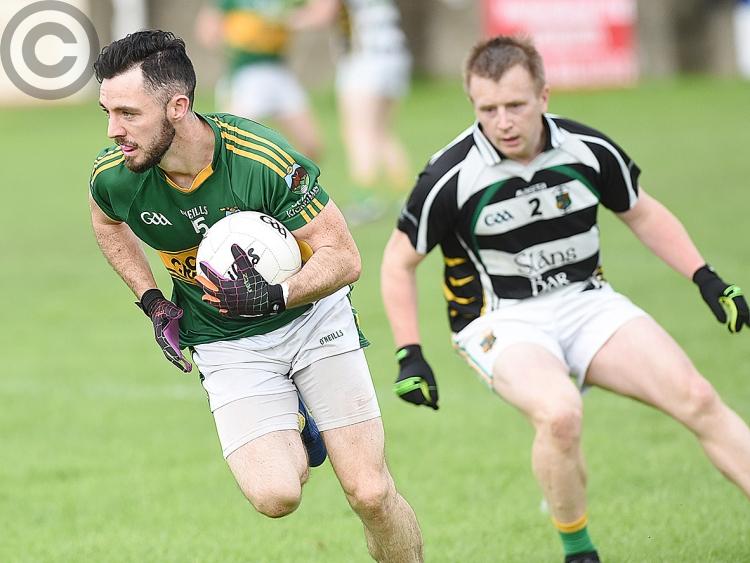 William Woods spear-headed Naomh Fionnbarra’s march into the last four of the Intermediate Championship in Dowdallshill on Sunday afternoon.

The Louth marksman caused havoc as Cooley Kickhams’ bare and brittle backline paid the price for their lack of cover. On every occasion the ball was sent into the ‘Barr’s offensive third, Woods and Adam Hanratty had the beating of their markers in the footrace. Woods closed with 1-7, but Hanratty’s contribution can’t be underestimated as many of them stemmed from his primary collections.

Woods was integral in the scoring of both of the Togher men’s goals. He ruthlessly placed the first beneath Neil Gallagher when his team trailed by two early on before laying on for Conor Osborne shortly after the break, and the son of John made no mistake in picking his spot in the bottom corner.

And from there the outcome had an inevitable feel, despite James O’Reilly and Brian White pushing Kickhams forward in the dying embers in search of parity.

The winners’ start was sluggish and in failing to punish them, Cooley perhaps left the match behind. Emmet Rogan, Michael Carron (2), O’Reilly and Conor McGuinness (2) all raised white flags as the ‘Barrs mustered only Woods’ goal, but a run of five points out of six had Paddy White’s side showing in front by two as half-time neared.

Yet Cooley halted their march with points from Fearghal Malone and O’Reilly, and in doing so, re-entered the fray as frontrunners for victory.

But Woods, helped by the service of John Doyle and Darren McConnon at midfield, came alive in the second half, play-making and scoring at will, and when Osborne found the net the mid-Louth outfit led 2-6 to eight points.

Cooley responded in desperation with five of the final seven points, but it was those two from Woods which acted as the dagger in the peninsula men’s charge. It was almost as if Woods was teasing them, and he was, letting rip a loud roar towards the Cooley dugout at full-time.

If they can keep him in this form, with St. Fechin’s to come in a semi-final, who’s to say the Togher men can’t go the whole way.