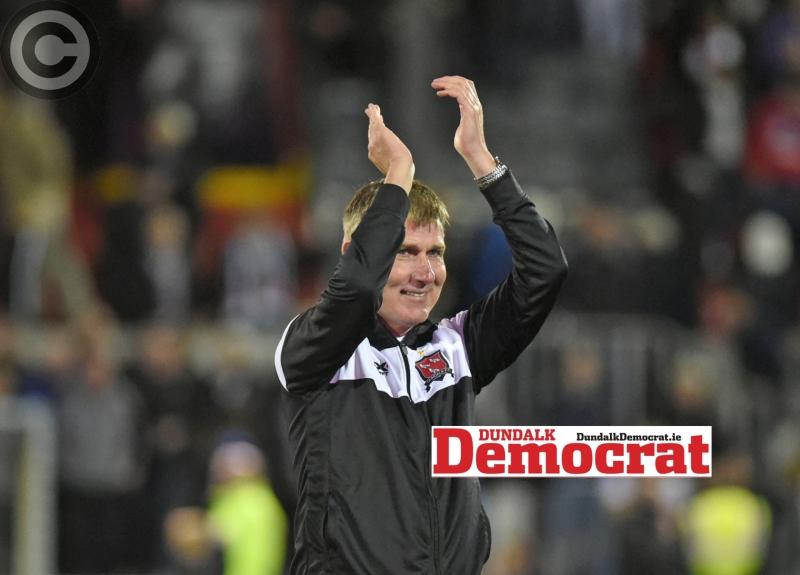 Nothing carried in programmes, on websites, on Facebook, or on this newspaper’s Leader pages over the past few weeks is going to deflect me from continuing to take a long-range view of Oriel Park goings-on. There are stories, most of them good, emanating from the Carrick Road and are worthy of mention. It’s not difficult making observations from afar.

I’m not at the coalface. While a regular in Casey’s field in my early teens, taking in Dundalk senior and reserve team games in the winter months Sunday after Sunday, being part of Jim Berry’s programme-selling team, and playing with Frankie Whitmarsh’s underage Arsenal before transferring to Lisnawilly for a fee that would make Cristiano Ronaldo’s teeth water, I’ve been up there only twice since they turned the pitch around.

Once was to see one of the next generation play for a Bellurgan United boys’ team, the other to have a photo taken with Joe O Cearuill, the ex-Republic of Ireland International and Arsene Wenger student who at one time was providing so much soccer grist to the Inside Track mill, Jim McCourt wanted to know if he’d done anything on us. Joe’s pitch next door was venue for most of my outings, but there were occasions when we got the chance to kick the ball up and down the Oriel hill.

Nowadays the dailies and weeklies are full of what’s going on to keep me fully informed, and when an update is required on the latest Dundalk outing, John Murphy (inset) and Ger Cunningham provide it on local radio.

When Ger’s not available to fill the role of supporter-with-a-microphone - “Ah, come on ref, he didn’t handle it, he practically caught it” - Gussie Hearty is a more than able reserve.

Stephen Kenny, who would know that his achievements at Oriel have won him recognition beyond the game of soccer, had his say on the Liam Miller testimonial issue in the Dundalk programme for the Euro tie with Larnaca. I thought he was OTT, maybe even OOO, and said so here. The reaction was swift, even before the Demo’s sports guru, Caoimhín Reilly, put my piece up on the screen.

An email to the address at the top of this page said what I had said ‘needed to be said’ (if you know what I mean), while the contents of another wouldn’t be fit for reproduction in a family newspaper. Not being a F/b member/enthusiast/follower, or a website warrior, I didn’t see the digital content, but someone said it split on expected lines, GAA followers and Orielites first of all having their say and then taking on each other.

What should please everyone is that having had its gates opened for the Miller benefit, Páirc Uí Chaoimh will be full to the rafters in late September, housing an attendance of 45,000.

This will be exhibition stuff. When Dundalk eyes are next averted towards Cork after that, there could be a league title on the line. Inside Track will also be looking in.