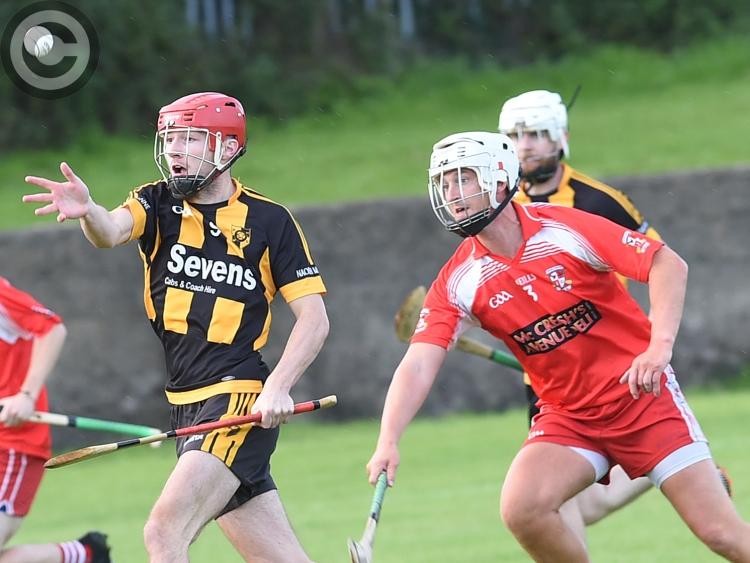 Knockbridge qualified for the Senior Hurling Championship final on Thursday night after a late scoring burst saw them over Naomh Moninne in Dowdallshill.

Holders Moninne looked on course for the victory which would have sent St. Fechin’s automatically into the decider, and Knockbridge into a semi-final with the Black and Amber.

However, two goals in a minute entering the dying embers of a topsy-turvy contest saw the Reds reach the decider for the second time in three years. Last year’s final pair, Moninne and Fechin’s, will meet to determine the other showpiece contender.

The first of Ronan Geoghegan’s three goals installed Moninne with a 1-3 to 0-4 lead after 10 minutes following a start which saw Knockbridge open the scoring through Gareth Hall.

And the gap was bridged when the younger Geoghegan sibling, Darren, knocked over another point to put Moninne 1-6 to 0-5 in front.

But, defiant, the Reds closed the opening half the stronger and through points from Ronan Byrne and Shane Fennell (2), reduced their deficit to the minimum at the break; 0-8 to 1-6.

Feidhelm Joyce put Brian Brady’s side two ahead with the first score of the second half; however, five of the next six minors would go to Knockbridge, with Fennell and Hall among the registrars, as they took a 0-13 to 1-8 advantage.

Darren Geoghegan cut the Reds’ lead to one before Ronan buried his second goal past James King with 19 minutes to play.

Knockbridge responded with a goal of their own from David Kettle, but four points out of five followed for Moninne who led 2-13 to 1-14 with three minutes to play.

Ronan Geoghegan’s third major came in injury time to close Moninne to within a point, but Gerry McKeown completed the scoring, with a point for the ‘Bridge, as the champions finished with 13 players following the dismissals of Paul Challoner (second yellow) and John Martin.