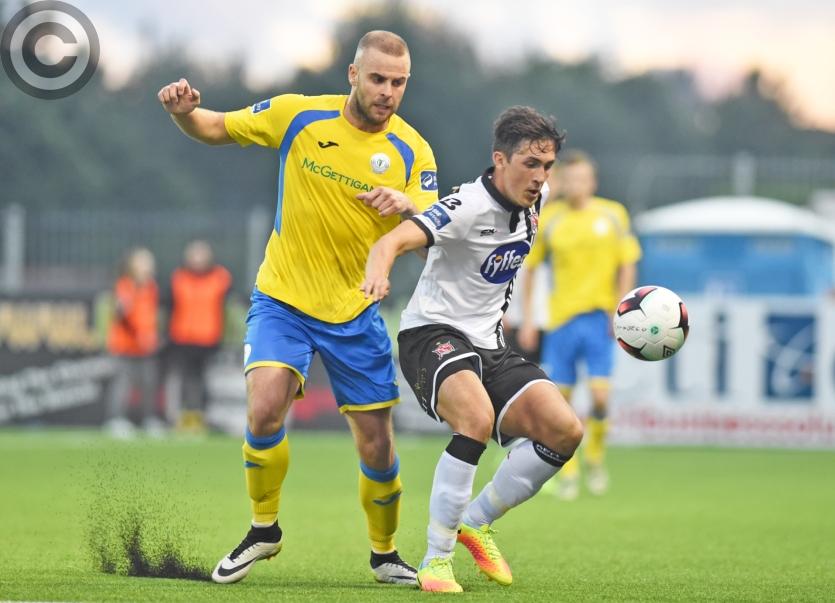 The earliest round Dundalk FC have bowed out of the FAI Cup under Stephen Kenny is at the quarter-final stage: Shamrock Rovers claimed a 2-1 replay victory at Oriel Park in 2014.

Rovers suffered a swift exit from the competition this time around, losing surprisingly,  if deservingly, 1-0, to Drogheda at United Park.

But while there will be no repeat of a cup fixture with Rovers in 2018, Friday night will see a re-match of the 1981 FAI Cup semi-final and the omens are stacked in Dundalk’s favour ahead of Finn Harps’ visit.

It’s seven meetings and 11 years since Harps last tasted anything but defeat, and since scoring their last goal, against

Dundalk as their two-season spell in the Premier Division came to an end last autumn. The Lilywhites have bagged 20 goals in the last six meetings.

MILLTOWN -  APRIL 5, 1981
They also failed to score in the ‘81 semi-final loss to the Louth side at Milltown as Dundalk proceeded to claim a seventh FAI Cup win by beating Sligo Rovers in the decider.

Mick Fairclough, a man who featured in an extensive interview on these pages last year, settled that last four affair, having overcome a knee injury to take his place in the team.

The move was seen as a gamble by  Jim McLaughlin, but Fairclough repaid his manager with the breakthrough effort on 13 minutes.

“Harps keeper, McDermott, had parried a Willie Crawley effort, but before the ball could be cleared Fairclough converted the rebound,” it was noted.

“Harps had no real answer as Dundalk settled to defend their lead. Blackmore dealt ably with Logan’s effort in the 36th minute, while Vinny McKenna came close to extending Dundalk’s lead with a fiercely driven shot that shaved the crossbar.

“Harps had one last chance when Blackmore scampered across his line to save from McGroarty. By this time, Harps had been reduced to 10 men when McLoughlin was sent off after a dispute with Dermot Keely.”

Goals from John Archbold and Fairclough sealed a 2-0 final win over Sligo Rovers.

NO GAMBLES NECESSARY
While McLaughlin gambled on the fitness of his match-winner, Fairclough, Kenny has no major fitness concerns for Friday night’s clash, apart from injured skipper Stephen O’Donnell, who has stepped up his recovery programme in recent weeks in a bid to return before the end of the season, and Karolis Chvedukas.

John Mountney, who came off the bench during Monday night's win over Sligo Rovers, is one expected to come into the team.

“It has been a frustrating time for John, but he’s someone who is very important for us and will probably come into the team against Finn Harps on Friday.