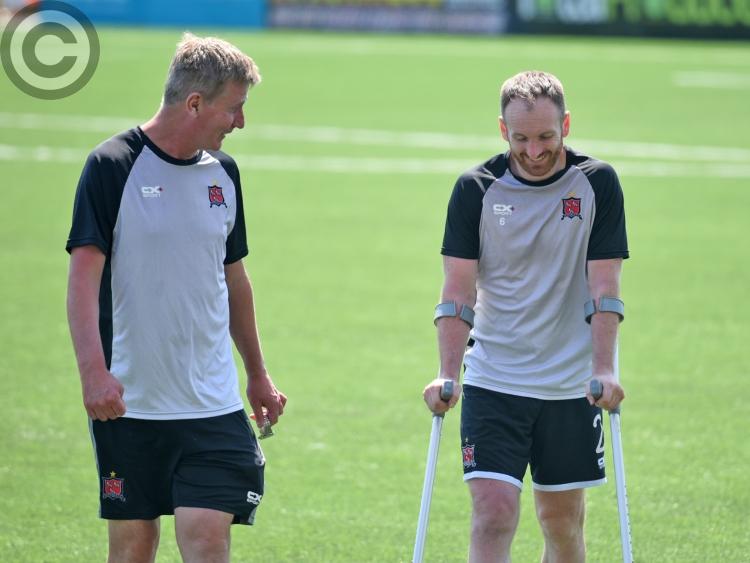 Next Thursday, August 2, could be a decisive 24 hours in Dundalk FC’s season. As the Lilywhites play the second leg of their Europa League qualifier against AEK Larnaca in Cyprus, the club’s ‘skipper, Stephen O’Donnell, will meet with specialist surgeon Denis Collins at Beaumont Hospital for one last check-up.

It’s 12 weeks since O’Donnell broke his right leg in an Airtricity League match away to Waterford.

An innocuous landing when tussling with his opposite number, Stanley Aborah, resulted in the horrific injury - the second potentially career-threatening the 32-year-old has picked up since joining Dundalk in 2013.

In recent weeks, he’s returned to the area and began to step-up his rehab work, and being back amongst his team-mates has helped him to focus on getting himself fully fit.

“I’m through the worst of it probably; the brace is off and I’m without the crutches so I’m back in, this (last) week was probably the first main week of doing stuff in the gym; trying to strengthen the leg muscles around the knee and doing a bit of fitness work on the bike and the rower with the medical team,” O’Donnell told The Dundalk Democrat.

Coping with the injury proved difficult at first, as doubts over his future in the game surfaced in his own head.

Having worked so hard to get over an ankle concern at the start of the year, to be faced with another arduous road to recovery - a trek he completed in 2014 after rupturing the ligaments in his left knee - was a stern mental hurdle. Yet time is a great healer, in more ways than one.

“I’m more relaxed about that now. I wasn’t too insecure about my future this time; I was a lot more the last time, when I did it first, and I don’t really know why,” said O’Donnell, who is the longest serving captain in Dundalk’s history.

“Obviously, I’m not getting any younger and you know that there’s not a load of seasons left in me so it has been frustrating, missing another large chunk of games and seeing the lads going on a great run.

“You’d only be hoping that that would be the case, but if you’re a footballer, and especially one getting on in age, it is frustrating to see the season go by and you not actively involved.

“That’s the frustrating part, but I’m kind of used to it at this stage.”

Manager Stephen Kenny has been in constant contact, and is always willing to give him “a pep talk” when required.

He’s hoping to play a role in what could potentially be the seasons of all seasons for the club, as they remain fighting on five trophy fronts, but feels the coaching staff and players that are there are well able to keep things moving in a forward direction.
Ultimately, O’Donnell’s future must come into question too.

Despite his status as a club legend, his current contract expires at the end of the year.

Talks over where he will play football next year haven’t taken place, as yet, though it’s not something he’s dwelling on.
Getting back on the field of play is target number one.

“Everything hinges on how you come back,” he admitted.

“There’s no guarantee that you’ll come back as right as rain from any major surgery on your knee. That’ll all be played out depending on how I come back, but there’ll be no chat, and I don’t expect there to be any chat, at this stage.

“My main priority is to get rehabbing and get my body in the best shape possible, and we’ll worry about that further down the line.”

Indeed, a return before the season’s end is not being ruled against. After all, four years ago, he came back after six months out to inspire the Lilywhites over the title line, scoring the opening goal in the decider against Cork City on the final day.

“I’m a bit more positive about it than I was, but it’s very hard to tell.

“Obviously, I’d have to get everything to go my way between now and the end of the season. I’m a bit more optimistic now than I was, but I don’t want to pre-empt anything."

Here’s to a positive August 2 all round.