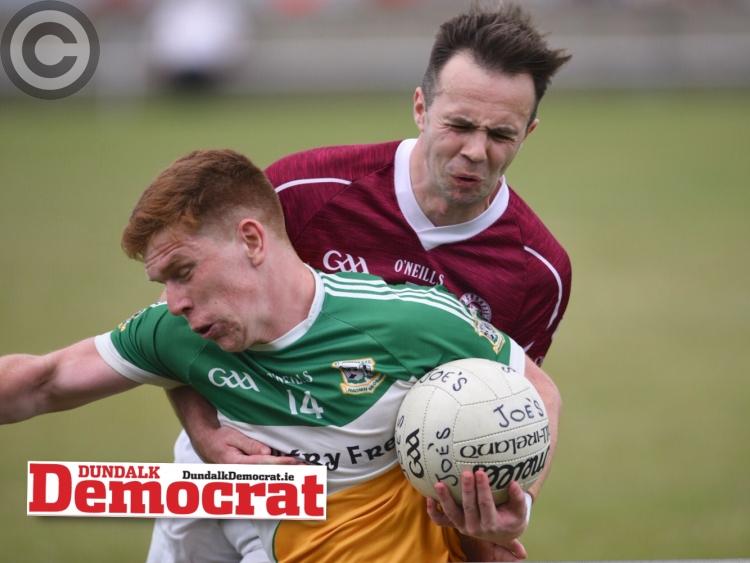 St. Joseph’s sprung a surprise in Dunleer on Sunday night to book their place in the last eight of the Senior Football Championship.

And the Dromiskin/Darver side were full value for their triumph over a bitterly disappointing O’Connell’s, who featured like a team whose minds had already moved to the knockout stages.

The Castlebellingham natives, who scored 3-18 just a week earlier at the same venue, just about managed to wrestle top spot in the group, after a stunning surge had the Joe’s ahead on score difference.

A strong finish, which included points for Robert Quigley and Niall Conlon, the latter having plied a lone furrow in attack for much of the contest, put Paul Gallagher’s charges through as winners of group four, as O’Raghallaigh’s, despite their round one victory over the Joe’s, dropped into the demotion reckoning.

While just marginally less wasteful than they were in their previous defeat, the Joe’s had Conall Smyth and Alan Quigley in prolific form, particularly in the second half.

The pair accounted for eight of their team’s 11 points after the break, with Quigley converting on five occasions after Smyth had kept them in touch in the early stages.

For much of the first half, the Joe’s dominated, but with their shooting letting them down and the wide count reaching seven, O’Connell’s made good use of their breaks forward.

Conlon fortuitously found the net after Dean Stanfield’s shot had been blocked as the ‘Bellingham side took the lead for the first time. It followed fine long-range points from Jack Mulligan, Conall Smyth and Craig Doherty for the Joe’s.

With O’Connell’s ahead by one, the opening period ended with the trading of four points, the highlight being Mulligan’s second with the outside of his left.

Conlon and Salem Rifaie immediately pushed the gap out to three; a scoreline which had the Joe’s on their way out of the championship. But then they came with a second wind, shooting six of the next eight points as they made O’Connell’s pay for a lacklustre display.

The gap widened with Quigley pointing frees from various positions, but, as if able to turn it on whenever necessary, O’Connell’s cranked it up a notch to qualify atop a group where all three teams finished on two points. This despite having James Clerkin dismissed on a second yellow card.