Can you name for four World Cup 2018 players who have played against Dundalk FC? 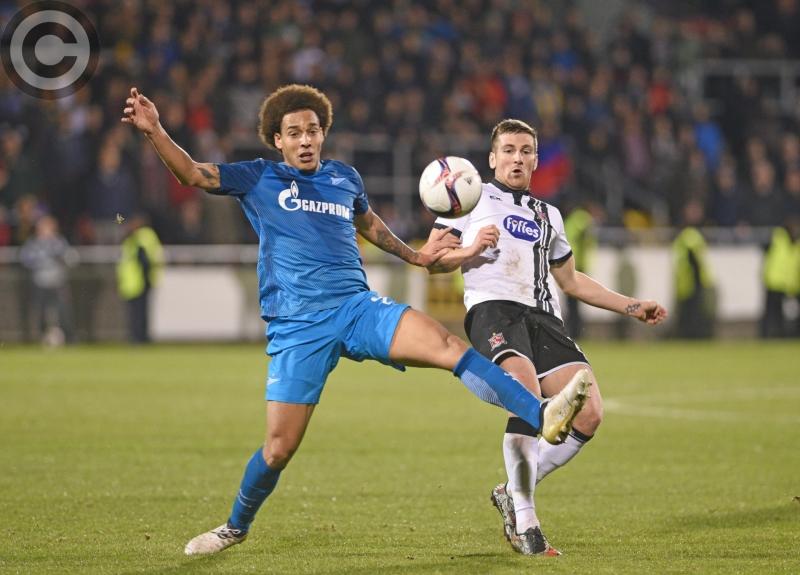 Axel Witsel and Patrick McEleney during the 2016 Europa League clash of Zenit and Dundalk at Tallaght Stadium. (Pic: Ciarán Culligan)

Pete Traynor, who's good at answering questions on all topics, but mostly sport, turned quizmaster the other day. He wanted to know how many players involved in this year's World Cup finals played against Dundalk. He knew of two, but had a feeling there was a third. There was a fourth, however, and more.

Okay when it comes to digging out facts and figures, but not so hot when it comes to instantly answering questions like this one, Inside Track came up with Cristiano Ronaldo as the answer. He must have been here at Oriel with Manchester United - isn't his photo, taken with him alongside Gavin McKeever and Anthony Mulholland, up on the Wall in The Works hairdressers?

According to Gavin McLaughlin, formerly of this parish but now foraging with his own online creation, Dundalk Sport, Cristiano was in town as a guest speaker at a function in Ballymascanlon Hotel, organised by Dundalk Supporters' Club. He was with Kleberson, who was a World Cup winner with Brazil in 2002, and, like CR, on the Man U books at the time.

Kleberson wasn't one of Alex's most inspired purchases - and neither was Eric Djemba-Djemba, who accompanied the Brazilian to Old Trafford. Indeed, according to McLaughlin, Djemba-Djemba was so bad they named him twice.

Over to Caoimhín Reilly, this paper's Kevin of all sports and very good when it comes to spelling foreign names. He said Lovre Kalinic and Filip Bradaric were on the Croatian panel, though neither featured in the defeat of England, nor in Sunday's final. The lads played for Hajduk Split, Kalinic in goals, Bradaric in midfield, when their path crossed with Dundalk's in the 2014 Europa League qualifiers.

Split put themselves in a winning position by beating the Lilywhites 2-0 the first leg at Oriel Park, and in the second leg went one up. But goals by Pat Hoban and Kurtis Byrne gave Dundalk hope, only for it to be extinguished by the referee's final whistle.

The third in the quadrant, Alireza Jahanbakhsh - fair play to you, Kev - was on the Dutch side, AZ Alkmaar, for their two 2016 Europa League ties with Dundalk. Ali is an Iran international, and early in the World Cup preliminaries played in his country's 1-0 win over Morocco, came on as a reserve in the defeat by Spain and started in the 1-1 draw with Portugal.

He's set to join Leicester City, and it's with eager anticipation that we wait to hear how Brian Kerr pronounces the newcomer's name if he ever happens to be co-commentating on any of The Foxes' Saturday afternoon matches.

Another is a compatriot of our Inside Track's old friend, Marouane Fellaini. Axel Witsel is now plying his trade in the Chinese Super League, but two seasons back he was part of the Zenit side who Dundalk pitted their wits against on a home and away basis.

If all of the foregoing shows nothing else, it's the calibre of the sides Dundalk faced in that wonderful odyssey they were - and still are - on in recent years.