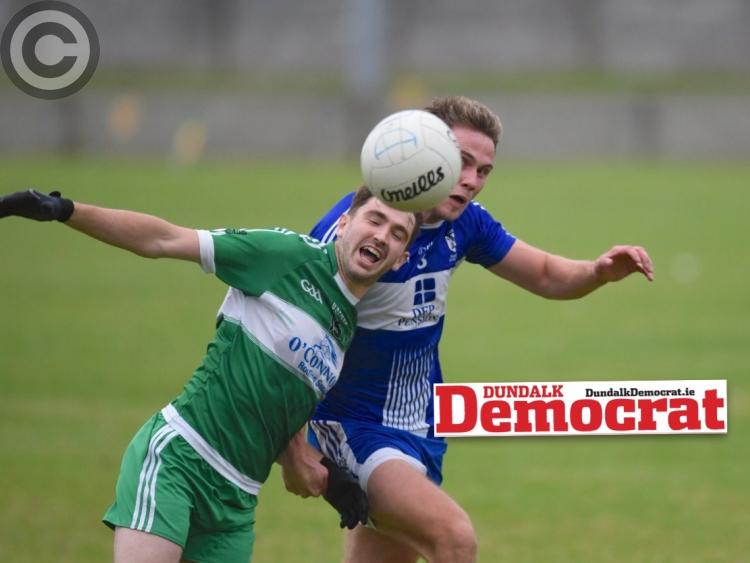 Geraldines were the only losers on Saturday night as St. Patrick’s and Dundalk Gaels took their places in the last eight of the Senior Football Championship.

Permutations beforehand had both teams knowing what they required: Pat’s had to win, while Gaels could afford to lose, so long as it didn’t surpass five points. And that’s exactly how it played out.

Gaels went out as if playing for a narrow defeat, and it almost cost them. Malachy O’Rourke’s team awoke from their slumber midway through the second half to reel in the Lordship men to some degree, and save their Joe Ward aspirations.

They trailed by eight at the break and seven on two occasions in the second half. They were heading for the demotion scrap and in need of leaders, and they found them in Gerard McSorley, but particularly in David Moloney, whose move to centre-field propelled his influence by countless levels.

Having shot 1-6 in the opening quarter, the outcome always favoured St. Pat’s. Indeed, they knew victory would ensure them of top spot in the group, something which looked so far away after their round one loss to the Gers.

Intent on getting into the knockout stages for the second year in succession, Gerry Cumiskey’s team hounded Gaels, whose ponderous, negative play served little purpose into a relentless current.

Danny O’Connor had a poor game by his standards a fortnight ago, but more than redeemed himself here, converting 1-6 of his team’s total in a classy individual display.

Individual errors were costing Gaels dearly in the slippery conditions, and David McComish, normally so reliable, was the error-maker in the lead-up to O’Connor scoring the only goal of the contest on the stroke of half-time. But, credit the Pat’s captain for his finish. He almost blew a hole in the top-corner.

That installed Pat’s with a convincing 1-9 to four-point advantage before Gaels threw off the shackles, doubling the winners' tally in the second half.

Moloney landed three wonderful points, as too did Louth forward McSorley. However, Gaels will know they got out of jail and improvement is a must if they’re to avoid a knockout round rollicking.