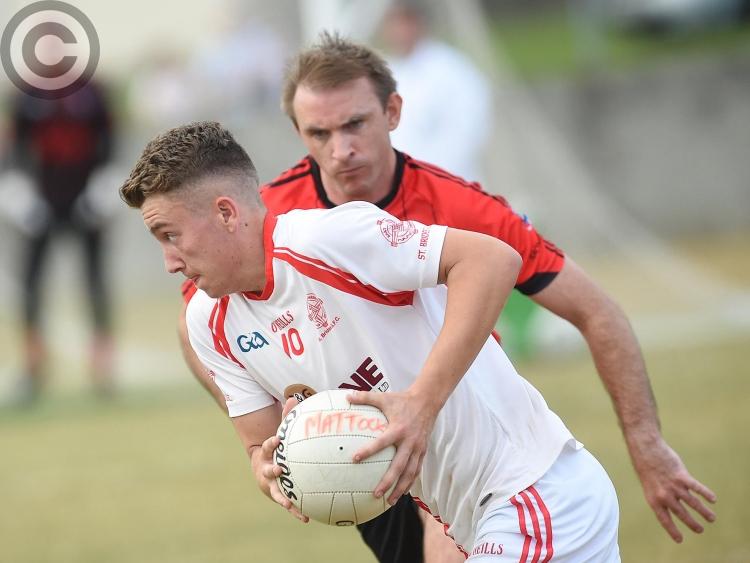 St. Bride’s confirmed their place in the quarter-finals of the Intermediate Football Championship with a point against Mattock Rangers in Ardee on Saturday night.

The Knockbridge side will feel aggrieved that they failed to claim the win, however, given how they controlled the majority of this encounter at Páirc Mhuire. James Caraher’s second half dismissal did not lead to the Bride’s taking the impetus.

In fact, they surrendered it with Mattock reeling in a four point deficit to level late in the game. After an opening weekend victory over Clan na Gael, the point means the Bride's are through and now Mattock and the Clans will go head-to-head to join them in the last eight.

The men from Collon made one of the shortest hops of the weekend for their first outing of the campaign, but it was the Bride’s who started quicker. Aaron Hoey and David Reid swapped points, the latter from a free, before Ciarán Deane notched and goalkeeper Conall Devin came forward to pop over a routine close range free.

The sprightly Aaron O’Brien hit back, but Seán Marry and Kevin Hearty – the two stars of last week’s win over the Clans – extended that lead before the break. Both minors were smacked high between the posts.

Reids’ Adrian and David combined soon after to put in O’Brien again with his point leaving the scores at 0-5 to 0-3 at the interval.

The Brides's were dominant in the first half without showing the sort of cutting edge to mirror it on the scoreboard. In an effort to change things, John Kennedy opted to reshuffle his midfield at the break, with Hugh Donnelly introduced in place of Daniel Bannon.

Within minutes of the restart, Cathal Clarke replaced Conor Leneghan, but it had no immediate impact. Marry scored two frees in the opening 10 minutes of the second period, while James Costelloe scored the point of the game, instantly cancelling out a David Reid riposte.

Hopes of a winning return to Collon for the Rangers contingent were hit hard when referee Thomas Brennan brandished a second yellow card to Caraher with 47 minutes played, but with the Bride's given an opportunity to press home their advantage, the opposite played out.

Caraher’s brother, Alan, scored a fine point, added to soon after by Ronan Kilbane and then Terry Donegan. The Brides’ ex-Louth veteran Hoey was excelling at full-back in a game where, admittedly, the defences were on top.

But he could do little to prevent the Mattock surge as the game neared its close. Deane did point from close range, electing not to go for goal, before he hit a superb last minute minor which prompted a conflab between the referee and umpires behind the goal.

Adrian and David Reid kept Mattock in touch and in injury-time, Kilbane split the posts to level after good work from O’Brien.