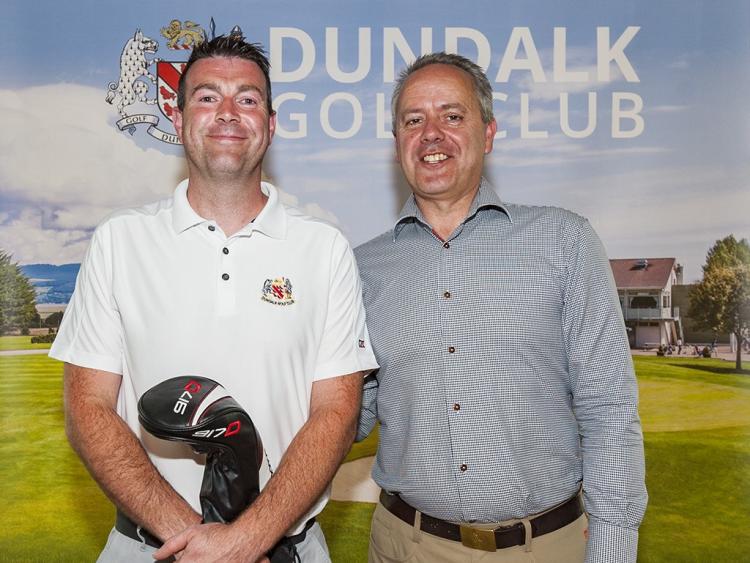 Eleven days after winning Leslie Walker’s Professional’s Prize and having his handicap lowered by two shots to 14, Kevin Redmond took another important prize last Wednesday when he won the Oriel Cup.

This competition is the highlight of July’s Open Week and Redmond produced a four under 68 to take the title by one shot from Michael Carr (14).

Three pars over the first four holes and three pars over the last four were the key to a steady round that saw Redmond shoot one double bogey along with seven pars, nine bogeys and a birdie four at the par five sixth.

Open Week was another big success with strong entries in all competitions and thanks are extended to all those who sponsored the various completions and the members and visitors who participated each day.

The eight days of competition concluded on Sunday with an Open Singles competition which was won by another in-form player Fergal Sexton (10) coming out on top by one shot from Seamus Bailey (12).

A strong finish which saw him par his way in from the 14th and pick up 13pts was the key to Sexton’s round of 40pts which was equally split between the two nines and included a birdie three at the index one fourth, 11 pars, four bogeys and two double bogeys at the first and seventh.

Bailey finished on 39pts and just edged out Conor Murphy (10), Danny Gallagher (13) and Joe Garvey (18) for second overall but there was the consolation for the trio of winning their respective categories. Conor Curran (2) had the best gross with 35pts.

Members are reminded that support is needed for our Barton Shield team when they face Corrstown on Friday, July 20, in Mount Wolseley. A bus has been organised and bookings are now been taken in the Bar and Pro Shop. Seats are €10 return.

Thanks to all members for your continued support of Junior Golf through our recent US Open competition which attracted a large entry. After a closely fought contest we had three winners who tied on a score of +22. They were: Peter Reilly, Aaron Waite and Timothy Jewell.