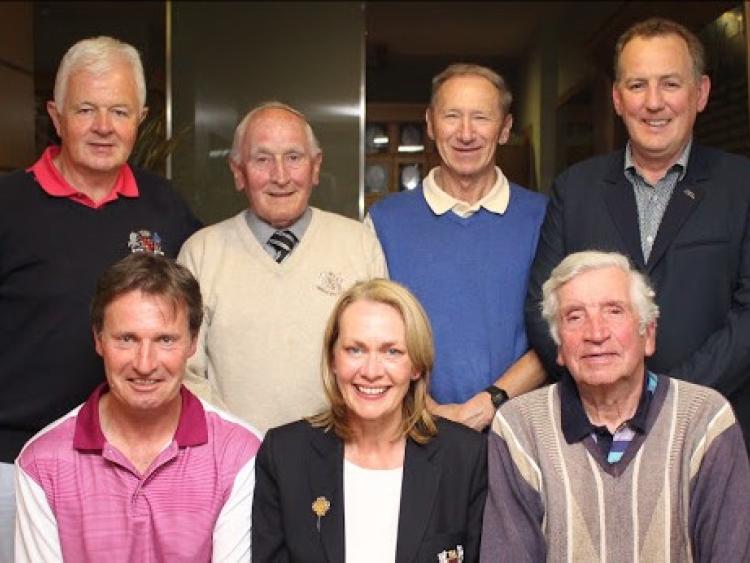 A former men’s captain, Brendan Keane, was the winner of lady captain Pat Cleary’s prize to the men on Sunday when he shot a four-under-par 68 to win by one shot.

He took full advantage of an early start which allowed him to miss the rain that descended on many of the later starters and made a tough blue course even tougher in the windy conditions.

Keane, playing off 12, went through the opening nine in nett level par as pars at the third, fourth and eighth, where he had shots, cancelled out double bogeys at the first and ninth and a bogey at the second where he didn’t have a shot.

It was much more positive for Keane down the back nine, beginning with a birdie four at the par five 10th which was a nett eagle to bring him to two under par. He went to three under with a nett birdie at the par-five 12th.

He dropped a shot with a bogey at the par three 13th but got it back with a par into the wind at the index six 15th and went to four under with a wind-assisted par at the index four 16th.

Another par three bogey, at the 17th, momentarily took him back to three-under but he eventually signed for a four under par net 68 after a fine par on the last which was playing long into an extremely strong wind.

It proved to be a vital nett birdie as he finished one shot ahead of Mark Browne (16), Danny Miele (11) and Barry O’Hanrahan (20) who all finished on 69 and had to be separated on countback.

Browne, who has been cut six shots already this year, prevailed with a better back nine and his handicap will continue to plummet. Miele took category one while O’Hanrahan won category three and Declan Muckian (14) claimed category two after a 70.

Aaron Grant (+2) produced an excellent round of level par 72 to win the gross prize while another former captain, Dermot Duffy (25), took the Veteran’s Prize with a one-under-par 71.

Caolan Rafferty will tee it up this week alongside 288 of the world’s best amateur golfers at the British Amateur Championship which is being played at Royal Aberdeen and Murcar Links in Scotland. The winner will secure a spot in the British Open at Carnoustie in July. Last year, Caolan won the silver medal for leading qualifier.

Rafferty, who has been named on the Great Britain & Ireland squad for the biennial St. Andrew's Trophy match against Continental Europe, which will be played on July  26 and 27 in Linna Golf Club, Finland. The final team will be announced after the European Men’s Team Championship next month.

Clem Walshe finished joint 13th at the Ulster Seniors Amateur Open which was held last week in Rosapenna. Rounds of 79 and 80 saw him finish on 159 over the tricky Donegal links, seven shots behind the winner Adrian Morrow of Portmarnock.