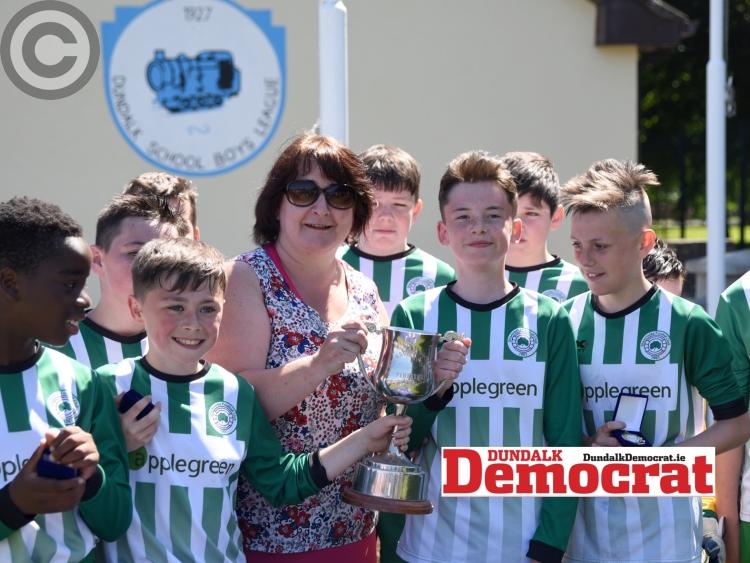 Shamrocks U12s completed a glorious campaign when they added the Cathal Mulholland Cup to their Premier Division crown with a 3-1 win over a gallant Muirhevnamor outfit at Bellew Park on Sunday.

The favourites had it made clear to them early on that Muirhevnamor weren't there just to make up the numbers, yet the Hoops still made the breakthrough when Aodhan Kirk broke the deadlock for Shamrocks.

However, the Blues levelled when Kyron McGee scored as the sides went to the break with a goal apiece.

Though the Hoops went ahead once again just two minutes after the restart when a poor clearance landed at the feet of Cathal Corcoran who slotted to the empty net.

Muirhevnamor battled gamely to get back on terms for a second time, with Hughie McGinley firing wide, while a Pauric Lee header was disallowed for offside.

The winners recovered, however, going close to extending the lead on a few occasions before, with six minutes remaining, the Fatima boys sealed the win. Fionn Dines was the scorer, shooting a free-kick to the back of the net.

A spirited Muirhevnamor side refused to give up and a terrific effort from Louis Murphy was saved by Alex McArdle in the final minute as Shamrocks deservedly went on to claim a historic league and cup double.