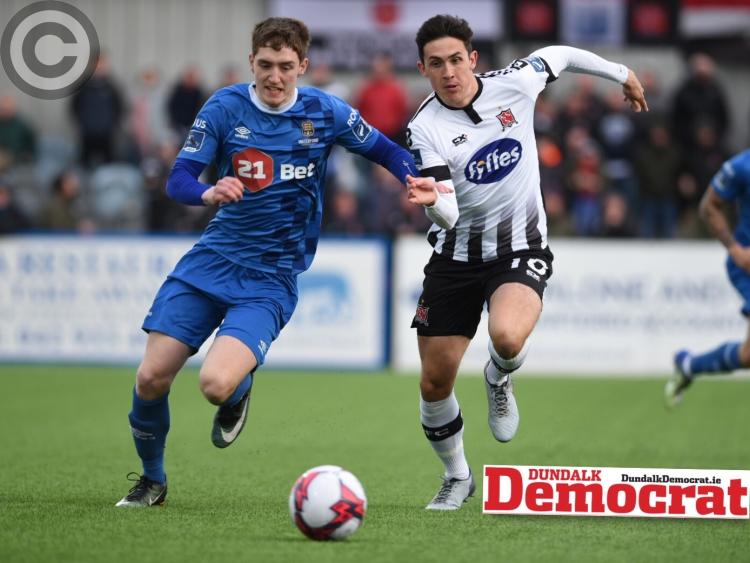 Robbie Benson's fine first half effort broke the deadlock shortly before the half-time interval; while a 90th minute goal from substitute Marco Tagbajumi - his first league finish for the club - saw Alan Reynolds' side return down the M9 pointless.

And, following Cork City's victory over Limerick at the Market's Field, the title race now looks set to be exclusively between the two perennial contenders, Dundalk and the Rebels, contrary to some early season assertions. First Division champions Waterford are winless in four since defeating Stephen Kenny's side on May 4.

Fielding the same line-up which started in Friday night's victory over Bohemians, the Lilywhites controlled this contest for long spells and ought to have been further in front, especially by the short whistle with Waterford 'keeper Lawrence Vigouroux pulling off some fine stops in the early stages.

Daniel Cleary, Jamie McGrath and Man of the Match Chris Shields all fired efforts on the visiting custodian, while Michael Duffy's fizzing 25-yard drive forced the Chilean to speculatively tip over the top.

A lead goal would come, however, just six minutes before the break. Shields intercepted on halfway and took a foray forward before finding Duffy who crossed for Benson, and having taken his time to sort out his feet the midfielder shot high to the net.

Whether it be the concession or the half-time words of their manager, Waterford upped their levels significantly either side of the restart. Having had a goal chalked off for a foul a minute before the break, the Blues operated a lot further forward when attacking the town-end goals in the second half.

In saying that, the league's top-scorer, Patrick Hoban, could have put the tie to bed for Dundalk early in the second period when blazing Dylan Connolly's pass over the top with only Vigouroux to beat, while, entering the final quarter, a strong run by Duffy ended with the winger stinging the palms of the 'keeper.

And those missed openings almost came back to haunt the hosts. Following several half-chances, Waterford defender Rory Feely looked certain to score only to take a tumble under pressure from Gary Rogers. The crowd watched with bated breath, yet referee Robert Hennessy ushered the play on despite visiting appeals.

Krisztián Adorján looked bright when introduced to Dundalk's attack, however, while the Hungarian was neat and tidy in possession, as the match progressed, the Lilywhites got deeper and deeper. And Waterford came forward, striking the post through Sander Puri before Ismahil Akinade's cross narrowly evaded the stretch of Feely.

But, after Duffy broke away and selflessly passed to his right, Tagbajumi rolled home to send Oriel Park wild.