Locals, Alan & Dean Watters and Kenneth Finnegan also had winners on the card 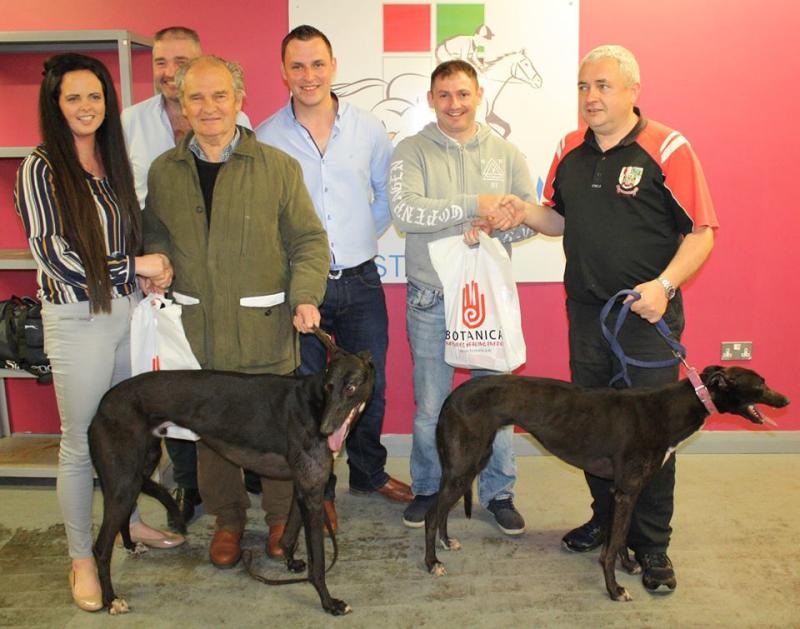 The odds-on chance had the fastest semi-final time, his 28.67 being his best-ever for the distance and togged out in blue wasn't in the least inconvenienced.

Owned by local bookmaker Barney O'Hare in partnership with trainer, the Dromiskin-based Ambrose Quinn, Young Willie Mc was first to show, but had others in contention at the opening bend.

However, after going clear early in the back straight, the choicely-bred - by Kinloch Brae ex Razldazl Lily - had it easy. He finished three lengths clear of the always prominent Choctaw Gift in 28.83.

Having recently celebrated his fourth birthday, Young Willie Mc is running better than ever. This win was his thirteenth on his 54th outing.

In contrast, Pretty Monkey is a beginner, and was going to traps for only the second time when she lined up for the card's opening sprint. In registering her first win, the youngster, owned by the Dundalk father-and-son combination of Alan and Dean Watters, showed lots of potential, winning over the 400 in 21.92.

Later in the card, Across The Bay gave Lordship enthusiast, Kenneth Finnegan, a pass into the winners' enclosure. The home-bred, a daughter of former Dundalk International winner, Quail Hollow, put in a strong finish to win by two lengths from Castleblayney challenger, Muckno Pop, bringing up win No. 9.

Ionic Buzz was having only her third race, running over the 525, and she battled gamely from the front to win in 29.35.

California Chrome is a bit longer in the tooth, but is no less enthusiastic. Having his 63rd outing, the Togher runner is very hard to pass when he gets to the front, and on this outing the white-and-black was in charge from the opening turn.

But he was pressed all the way on this rare outing over the 550 course, and it was by less than a length that he held the late run of Murleys Jack, clocking 30.52.